Darius Rucker is known as both Hootie of the popular 90’s band Hootie and the Blowfish, and by his own name as a country music star. He has been adding to his considerable wealth with the help of his music since 1986.

How Did Darius Rucker make their money & wealth 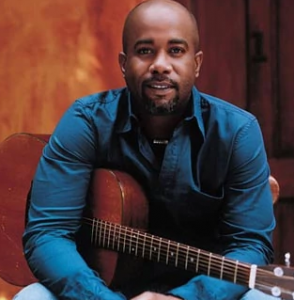 Darius was born on May 13, 1966, in Charleston South Carolina. He was one of six children of a single mother. Darius grew up poor, and once lived in a house with his mom, two aunts, grandmother, and 14 of his siblings and cousins. Despite these adverse conditions, he still looks back upon his childhood with fondness.

Darius Rucker has a humble beginning in music. He started by a singing REM covers in local bars with a college buddy who would later be in Hootie & the Blowfish. He met the rest of the band during his time at the University of South Carolina as he was getting his bachelor’s degree. Foodie consisted of Darius as rhythm guitar and lead vocals, Mark Bryan as lead guitar, backup vocals, and piano, Dean Felber on bass guitar piano and vocals, and Jim Sonnenfeld who was the percussionist.

Darius and his band members really cashed in when they came out with the album Cracked Rear View in 1994. The album peaked at the number one spot in New Zealand, Canada, and the United States. It has four major singles: Let Her Cry, Time, Hold My Hand, and Only Want to Be with You. The money came pouring in when the album went Platinum an impressive 16 times. Hootie & the Blowfish went on to make four more albums but they were never able to top the success of the first one.

Darius went solo in 2001 and made an R&B album that he released with an independent label. He is said that he had fun making that album but he’s fully invested in making country music. He even referred to it as his day job in an article in the Arizona Republic. This makes sense since he’s released six country albums since 2008, which is more than he ever put out with Hootie. His most recognizable tune is probably Wagonwheel. 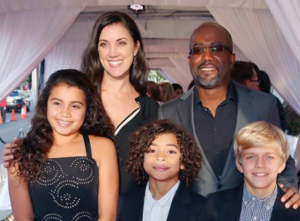 Darius Rucker married Beth Leonard in the year 2000. Prior to the relationship, Darius had a child with his girlfriend at the time and named her Carolyn Phillips. He and Beth have two children together. Their daughter was born just a year after their marriage in 2001, and her name is Daniela Rose. The pair also has a son named Jack, was born in 2005. He dedicated his single Alright to Beth and their marriage.

Darius’ salary for 2018 is unknown but is sure to be substantial. He spends much of his time touring with his country band. He just released a new album called When Was the Last Time, and he’s touring the UK in the fall. 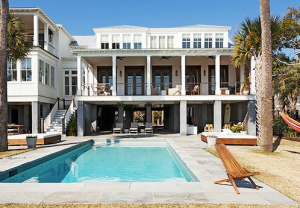 Darius lives in a gigantic house in a suburb of Charleston, South Carolina. He lives there with his wife and children. The home was built by the ground up and then decorated by a local designer named Angie. It’s been featured in many different blogs and articles. It’s a gorgeous design with large French doors in the bedroom, bright rooms with high ceilings, and bright colors as accents. 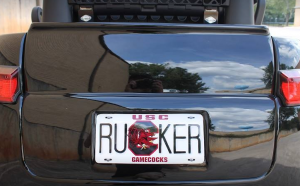 In addition to his regular car, Darius Rucker also has a custom-built golf cart made by the Specialty Car Company in Georgia. It seats for people, and it’s black with purple ghost flames. It is not known what kind of car Darius strives now, but he has told the press room at the Universal Music Group in Nashville that his first car was a Volkswagen Rabbit that he purchased for $800. He remembers it being a bright yellow and a real lemon. He said that he only had the car for less than two months before it needed an expensive part, and he “let it die”.

Darius Rucker is very involved in charity. He often dedicates the funds that he makes from some of his live shows to organizations such as St. Jude Children’s Research Hospital, the Special Olympics, and the Red Cross. He has his own organization called Hootie & the Blowfish Foundation it supports both nationwide and South Carolina’s specific charities. Darius is a golf fan and is actually friends with Tiger Woods. Occasionally he hopes the Academy of Country Music Lifting Lives Celebrity Golf Classic. That event raises money for the ACM Lifting Lives Diane Holcomb Emergency Fund Relief.

Darius has won many Grammys as both a solo artist and in Hootie & the Blowfish. He is been nominated for countless awards for his music. In 2009, he was the first African-American to win the Country Music Association New Artist of the Year Award at the Country Music Awards. He has a street named after him in North Charleston, South Carolina. Also in South Carolina, his former band Hootie & the Blowfish has a monument erected in their honor.