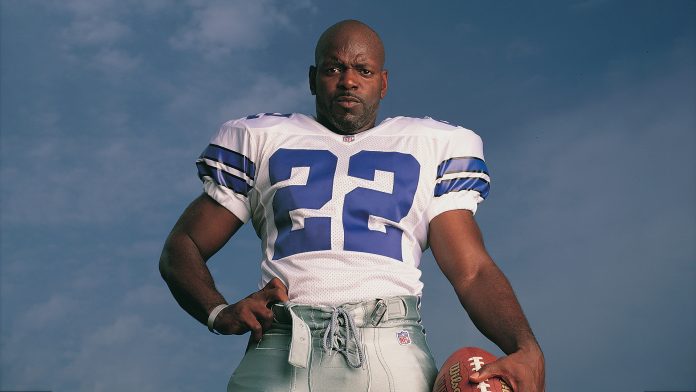 A former football player, Emmitt Smith played for the Dallas Cowboys for over a decade from 1990 to 2002. During his professional career, he became NFL’s all-time rushing leader, with over 18,000 yards. Not only that, but he held the record for the most rushing touchdowns- 164.

After many years of playing on the field, he announced his retirement in 2005, just a few days prior to the Super Bowl. Since then, he has worked as a sports analyst for many networks including ESPN and NFL Network. Not only that, but he has appeared in several television shows such as Dancing with the Stars, Jimmy Kimmel Live!, and How I Met Your Mother.

How much did he make from his professional football career? How well-paid was the athlete? According to various sources, Emmitt Smith has amassed a net worth of around $18 million as of 2018. Below, we’ll be going over some highlights from his career.

How did Emmitt Smith Make His Money & Wealth?

Born on May 15, 1969, in Pensacola, Florida, Emmitt Smith has excelled as an athlete ever since his teens. Not only did he play for his school’s football team as a student, but he also ran track. Recognized for his athletic abilities, he was named as “High School Player of the Year” by Parade and USA Today Magazine in 1986. After graduating from high school, he went to the University of Florida on an athletic scholarship, where he played for the Florida Gators.

From there, he was eventually drafted by the Dallas Cowboys during the 1990 NFL Draft. Allegedly, he was paid a signing bonus of $1 million, on top of a $200,000 salary for the first year. As he continued to make himself known in the NFL, his salary only went up- by the mid-1990’s, he was paid well over $2 million a year. By the early 2000’s, his annual salary had risen to $7 million.

In the end, Smith played for the Dallas Cowboys for twelve years, from 1990 to 2002. Considering his long career with the team, it’s not surprising to know that he’d already banked a significant amount by the time he switched to play for the Arizona Cardinals in 2003. Not only was the new contract worth $7.5 million, but he also received a signing bonus of $2.5 million.

A year after playing for the Arizona Cardinals, Smith announced his retirement in early 2005, just three days before the Super Bowl.

A few months afterward, it was announced that he had started to work as a sports analyst on NFL Total Access. In the years since, Smith has appeared in numerous television programs including Mike and Mike in the Morning, The James Brown Show, A Football Life, Good Morning America and Fox and Friends. In 2012, he even competed on the popular dancing competition series, Dancing with the Stars.

Speaking of television, did you know that he has also acted on a couple of occasions? In the past, he has appeared as himself in the series How I Met Your Mother and CSI: Cyber.

He has been married to Patricia Southall, a former beauty queen, since 2000.

Does Emmitt Smith Have Any Children?

Yes, he has three children with his wife- Elijah, Emmitt James IV, and Skylar, and a step daughter named Jasmine from his wife’s previous marriage.

Did Emmitt Smith Go to College?

Yes, he attended the University of Florida, prior to being drafted by the Dallas Cowboys. During the NFL offseason, he returned to complete his program; he graduated with his bachelor’s degree in 1996.

What is Emmitt Smith Famous For?

As a former NFL player, Emmitt Smith is best known for his professional career with the Dallas Cowboys. For his achievements, he was inducted into the Pro Football Hall of Fame in 2010.

Originally from Florida, Emmitt Smith currently resides in Dallas, Texas. Unfortunately, that’s all the information that we have on his location at this time.

What Kind of Car Does Emmitt Smith Drive?

Details on Emmitt Smith’s vehicle are not available.

How Much Money Did Emmitt Smith Make Last Year?

At this time, we do not have any information on Emmitt Smith’s annual salary.

So far this year, he has been featured in the shows The Will Cain Show, The Rich Eisen Show, ESPN First Take, and Golic and Wingo. In 2017, he also appeared in A Football Life, Mike and Mike in the Morning and Still in the Game with Roland Martin, among a few other programs.

Want to keep up with him? If so, why not follow Emmitt Smith on social media? You can find the former NFL star on Instagram at @Emmittsmith22 or on Twitter at @EmmittSmith22.