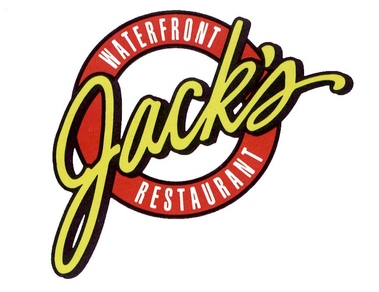 St. Clair Shores, Michigan, is a summer resort community about 40 minutes from Detroit. Located on Jack’s Waterfront, a lakeside restaurant recently was acquired by three bodybuilders named Bill, Scott, and Tammer. Tammer met Bill and Scott at the gym and they all clicked. They worked out together and hung out together, and they’re all partners in the restaurant. Bill says that Jack’s is known for having great entertainment, being the resort style place to come to. It’s sort of like “Girls Gone Wild” across the entire lake.

However, when the winter time comes, there just isn’t much going on. Jack’s Waterfront has had a reputation for bad food, and a compilation of customers stating how unsatisfied they are is played. In Tammer’s opinion, that’s what killed them. They brought AJ in to run the kitchen, who is Tammer’s father. They put all the trust in him, but the kitchen has completely fallen apart. They then put AJ in the front of the house to work as a manager just so they don’t have to fire him. After all, AJ is a partner’s father.

AJ explains that he will be talking with the customers and flirting with the ladies, all while asking about the food in between. He’s a total obstacle – Scott insists that every night during hours, he gets wasted on the alcohol restaurant. His favorite drink is ouzo. But to Scott, this isn’t professional. Despite this, AJ likes his life and enjoys it. Scott, however, is dangerous and he can hurt you if he wants to hit you. He’s very intimidating to most of the customers and staff.

The owners started getting calls from customers that Scott is too intimidating, so Bill and Tammer had to make the decision to remove him from the restaurant. He’s a silent partner now. They then brought in Aaron to replace AJ in the kitchen. He had only been there seven weeks and everything was messed up. The kitchen has deteriorated even further, but Aaron understands that changes need to be made. Despite this, he can’t make any changes because the owners are happy with the existing menu.

Tammer feels that it’s unfortunate that the three owners are pooling in money from other avenues to make the place survive. Scott is the one with the most investment, with more than half a million dollars invested. He’s also unhappy and feels that the group is running the business into the ground and are losing all of his money. They owe back sales taxes, back payroll taxes, and when you get into owning the government money, that’s a big issue. If things don’t change, nobody knows how to make the place survive.

Taking advantage of the frozen lake, Gordon snowmobiles his way to Jack’s Waterfront. He climbs the ladder onto the dock, imitating Bear Grylls emerging from a month’s stay in the woods, and takes a moment to catch his breath. He also marvels at the fact that Jack’s Waterfront is centrally located at the heart of all five great lakes. However, they are in trouble, and Gordon doesn’t know why, but it’s time to find out.

The interior of Jack’s Waterfront is actually fairly modern and comfortable. It has darker wood tones and cloth seating, giving the place a comfortable atmosphere. AJ says that he isn’t nervous, but he hopes that Gordon loves the food. Gordon mistakes AJ for the owner. Scott and Bill are the owners, and Gordon jokes that Scott is the bouncer. The two introduce each other and Gordon notices Scott’s physique. Scott mentions that he has been weight lifting for 24 years, but returns to business – he and Bill are present, and Tammer comes in later in the afternoon. Gordon meets Bill and jokes, “another gym rat.”

Gordon then decides to talk to each owner individually, as well as AJ, so each one can be totally honest. He starts with Bill, who says that he is working 65 hours a week. Scott does not put 65 in, and Bill explains that they had to move him out of the restaurant. He was scaring the employees. AJ agrees with the things that Bill said, although the customers were the ones filing complaints. Gordon then asks why Scott scared customers away, and he guesses that he was too intense at the time. However, he does want to be more involved. 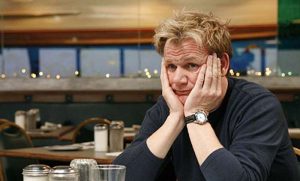 Erica is his waitress for the day, and the two introduce themselves. Gordon explains that it’s important to taste and see as much as possible, and Erica recommends an omelet. He points out that on the menu, “crab” is spelled as “krab.” This blows his mind, but he orders a “K Omelet,” the honey pecan salmon, and then the fish and chips.

In the kitchen, Erica asks chef Aaron why he spells the crab with a K. Aaron coolly explains that it isn’t real crab since it’s his crab meat, and he doesn’t want anybody to get the misconception. It’s completely artificial. One of the cooks guarantees no complaints on the K Omelet. The plate comes out, and it looks… discolored, to say the least. Gordon implores about the meaning of the K, and Erica explains that he wants everybody to know that it isn’t real crab. Gordon stops himself from taking a bite.

Gordon takes a minute but then takes a bite. The crab is rubber and tasteless, and he sends it back to the kitchen to go straight into the trash. The kitchen begins to show signs of stress. Aaron ducks responsibility, explaining that the crab was there already. Gordon asks if AJ has been drinking, but he denies it. The crab was shocking, embarrassing, and fake. Conveniently, AJ is allergic to crab and shrimp.

Scott is stressed that AJ is not overseeing the food properly, but the fish and chips arrive at Gordon’s table. He takes a bite but correctly points out that the fish is frozen and rubbery. It’s like eating a breaded condom, and the fish and chips are sent back as well. The final dish to arrive is the honey pecan salmon, and Gordon only manages one bite. It’s overly sweet, and the dressing is like honey.

Unsurprisingly, Jack’s Waterfront closed within 6 months of the episode of Kitchen Nightmares being taped (back in 2008.) The business has been closed for nearly 10 years, with the most recent review being from April 2009. Prior to closing, the service was still terrible, drinks were either too strong or not strong enough, and the food was still getting people sick. Most people loved the restaurant’s dock and traveling by boat.