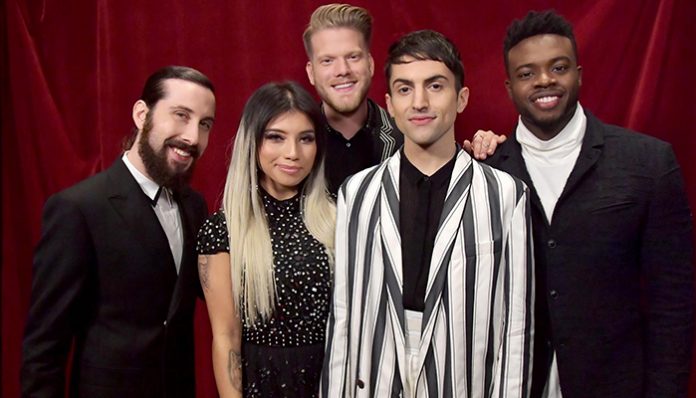 An acapella quintet, Pentatonix rose to fame after winning NBC’s singing competition, The Sing-Off in 2011. Since then, they’ve released several successful albums including PTX, PTX Vols 1 & 2, and A Pentatonix Christmas. Their most recent project, PTX Presents: Top Pop, Vol. 1 came out in April 2018.

As far as singles go, they are perhaps best known for Mary, Did You Know?, Daft Punk, Can’t Sleep Love, and Hallelujah, all of which received RIAA certification in the US. Rising in popularity as we speak, the group has sold more than 5 million albums to date in the United States.

Having said all that, how much have they pulled in in terms of revenue? How wealthy is the acapella group? How rewarding has their career been so far? According to sources, Pentatonix’s current net worth hovers at around $40 million. What contributes the most to their overall income? Let’s have a look below.

How did Pentatonix Make His Money?

Formed in 2007, Pentatonix was founded by three friends, Scott Hoying, Mitchell Grassi, and Kirstin Maldonado. After a few years of performing together, it was decided that they would be auditioning for NBC’s singing competition, The Sing-Off. With the help of two new members, Gen Bram and Kevin Olusola, they eventually landed themselves a coveted spot in the third season, which premiered on television in 2011.

Eventually going on to win the entire competition, the group received two prizes- a recording contract with Sony Music, as well as a $200,000 cash prize. Their debut EP, PTX, Volume 1 was released the following summer; a 7-track project, it had peaked at number 14 on the Billboard 200.

From there, they released two additional EPs, PTXmas and PTX, Vol. II, before hitting it big with their holiday-themed album, That’s Christmas to Me. Their most successful record to date, it sold more than 1.1 million copies within the country by the end of the year. Well received, the album has since gone platinum twice in the U.S.

Riding on the momentum, they dropped their next album, Pentatonix just a year later in 2015. Their first chart-topper, it had spawned three singles, one of which- Can’t Sleep Love, went gold. To date, over 500,000 copies have been sold domestically.

Since then, Pentatonix has issued two additional albums, the latest of which came out this April. Despite having reached the same music charts, however, it did not manage to rival the success of their earlier albums.

Now that we know more about the group’s achievements, let’s go back to our original question- what contributes the most to their overall income? Aside from the fact that they banked $200,000 from winning the singing competition, it’s obvious that they’ve pulled in a decent amount of earnings from their records, considering the amount that they’ve sold in the U.S. Not only that, but Pentatonix has embarked on a tour every year since 2012; naturally, these events would have also put some money into their pockets.

Speaking of tours, the group will actually be embarking on a North American tour later this summer. Coined the PTX Presents Tour, it will be kicking off in West Valley City on July 12, 2018. For more details, please visit their official website.

Are the Members of  Pentatonix Married?

No, as far as we know, none of them are married.

Did the Members of Pentatonix Go to College?

Yes, they did. In fact, they were still in college in the early 2010’s when they participated in the singing competition.

What is Pentatonix Famous For?

Pentatonix gained fame after winning the third season of NBC’s singing competition series, The Sing-Off. As the champions, they were given a recording contract as well as a $200,000 cash prize.

Where Does Pentatonix Live now? Photos of their house

The group is based in Arlington, Texas. Unfortunately, that’s all the information that we have at this time.

How Much Money Did Pentatonix Make Last Year?

Unfortunately, details on the group’s earnings are not available at this time.

Last month, they released their sixth studio album titled, PTX Presents: Top Pop, Vol. I, which peaked at number 10 on the Billboard Top 200. To promote the release, they will be embarking on their seventh concert tour later this summer. For more details on the dates and venues, you can check out their official website at ptxofficial.com.

What’s the acapella group up to nowadays? If you’re a fan of their work, why not follow the crew online? You can find them at @PTXOfficial on platforms such as Twitter and Instagram. For their latest news and announcements, head on over to their official Facebook fan page here.