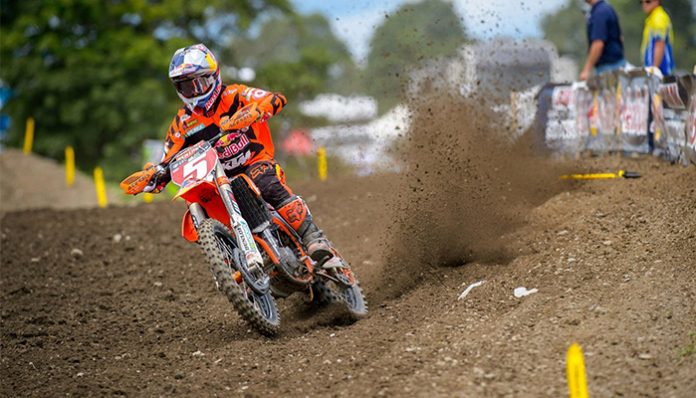 A former motorcycle racer, Ryan Dungey is perhaps best known for his accomplishments at the Outdoor Motocross and Supercross championships. Not only did he win the world’s largest international race (i.e. Motocross des Nations) three times, but he has also won every major title in the American Supercross and Motocross series.

After many years of racing, he announced his retirement in 2017, almost immediately after taking his last Supercross title. Since then, he has been featured in a few television programs including Focused, Why We Ride, and Motorclub. Last winter, he even had his own documentary series titled, Always5: The Ryan Dungey Story.

How much did he earn from his professional racing career? Considering his accomplishments at the race track, is it fair to assume that he’s wealthy? To answer this, Ryan Dungey is said to have amassed a net worth of around $8 million as of 2018. How much of this came from his races? What other projects has he been involved with?

How did Ryan Dungey Make His Money & Wealth?

Born on December 4, 1989, in Belle Plaine, Minnesota, Ryan Dungey is the youngest of three siblings- he has two older brothers named Blake and Jade, both of whom were amateur racers. Prior to signing his first professional contract at the age of sixteen, he competed as an amateur. In fact, he had won the 2005 Loretta Lynn’s Amateur Championships that same year.

In 2007, he launched his official professional career in the 250 East Supercross. Despite his rookie status, he went on to win his first race, much to the surprise of everyone in the crowd. By the end of the year, his accomplishments had earned him a Supercross Rookie of the Year Award.

Over the next two years, he continued to make himself known on the track, with multiple first-place finishes. In 2010, he gained a significant amount of attention after winning six different races that season- a feat that hasn’t been accomplished since Jeremy McGrath. Later that year, he helped the US team win first place at the 2010 MxoN event.

By the early 2010’s, he had earned a reputation for being one of the most consistent riders in the country. From there, he went on to finish on the podium many times, before announcing his retirement in 2017. By then, he had a total of 80 AMA wins, three of which he had accomplished that year.

In addition to his racing career, he has appeared in a number of television shows. For instance, he was featured in the sports program, The Moto: Inside the Outdoors from 2010 to 2012. In 2013, he also made an appearance in a documentary titled, Why We Ride. Some of the other titles that he’s worked on more recently include Supertahdet, Focused, Motorclub, and The Ryan Dungey Story.

Not only that, but he’s even acted on a couple of occasions! In 2012, he made his acting debut in the sports film, Moto 4: The Movie. From there, he worked on Monster Energy Supercross Chasing the Dream in 2016.

Yes, he has been married to Lindsay Dungey since 2014.

Does Ryan Dungey Have Any Children?

No, as far as we know, Ryan Dungey does not have any children.

Did Ryan Dungey Go to College?

No, Ryan Dungey has not gone to college. Instead, he had launched his racing career while still in his teens.

What is Ryan Dungey Famous For?

Ryan Dungey is best known for his accomplishments as a professional motorcycle racer. Throughout his professional career, he won every single title in the Motorcross sport- a feat that garnered him significant attention.

Unfortunately, we do not have any information on Ryan Dungey’s location at this time, nor do we have any photos of his abode.

What Kind of Car Does Ryan Dungey Drive?

Details on Ryan Dungey’s vehicle are not available.

How Much Money Did Ryan Dungey Make Last Year?

At this time, we do not have any information on Ryan Dungey’s annual salary.

Almost immediately after winning his 2017 Supercross title, he announced his retirement from the sport. Since then, he has appeared on television a handful of times, as mentioned earlier, in shows such as Focused, The Ryan Dungey Story, Focused, and Motorclub.

What’s the former motocross racer up to nowadays? If you’re curious, why not follow him on social media? You can find Ryan Dungey on Twitter and Instagram at @RyanDungey. On Facebook, he also has a fan page which you can check out here– while you’re at it, be sure to give him a like!