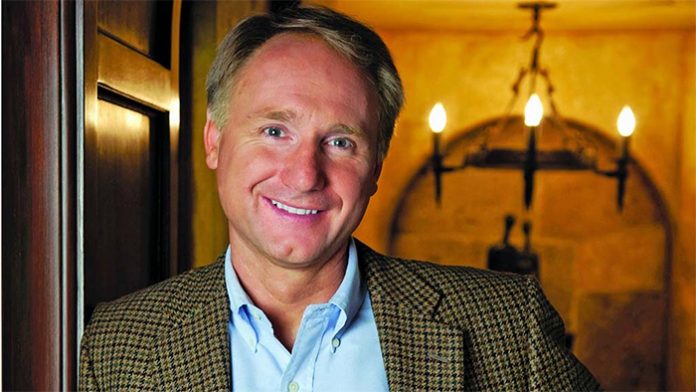 An American author, Dan Brown rose to fame with the release of his fourth novel, The Da Vinci Code in 2003. A New York Times Best Seller, it is currently one of the most popular books of all time, with more than 81 million copies sold across the world. Since then, he has released a few sequels including The Lost Symbol, Inferno, and Origin, the last of which was published in 2017.

Considering the popularity of the series, it’s not surprising to know that a couple of the books have been adapted into a film. For instance, the movie adaptation of The Da Vinci Code was released in 2006, with Brown as one of the executive producers.

How successful is he? How much has he earned from the novel series? From what we could find about his wealth online, Dan Brown’s current fortune stands at around $20 million. Since we’re here, let’s take a closer look at his career below.

How did Dan Brown Make His Money & Wealth?

Born on June 22, 1964, in Exeter, New Hampshire, Dan Brown grew up on the campus of Philips Exeter Academy, where his father was a math teacher. Ever since he was a child, he had been fond of puzzles and ciphers; for instance, he often spent many hours working out crossword puzzles and anagrams. After completing high school, he continued his studies at Amherst College.

Prior to pursuing writing, he dabbled in music. In the late 1980’s, he released a number of records including a self-published CD titled, Perspective, which sold over a few hundred copies in the U.S. Ultimately, it wasn’t until the early 1990’s, that he was inspired to become a writer, after reading Sidney Sheldon’s The Doomsdale Conspiracy.

His first book, Digital Fortress was published in 1998. Over the next few years, he released two additional novels, Angels & Demons and Deception Point. Despite his wife’s efforts in promoting the titles, however, they received little success, with less than 10,000 sales. Ultimately, it wasn’t until the release of his fourth book, The Da Vinci Code, that he rose to fame.

A New York Times Best Seller, the thriller has since become one of the most successful books of all time, with over 81 million copies sold across the globe. Within two years of its release, Brown’s net worth had shot up to $76.5 million, according to Forbes magazine.

Since then, Brown has published a few additional titles including The Lost Symbol, Inferno, the latter of which immediately reached the New York Times Best Sellers List. Most recently, he published his seventh novel, Origin in the fall of 2017.

Incredibly successful, two of his novels have since been adapted into feature films. In 2006, a movie adaptation of The Da Vinci Code was released in theatres; though reviews were generally mixed, it proved to be a commercial hit, with a gross of $758 million at the box office. Three years later, Angels & Demons was also adapted into a full-length film.

Yes, Dan Brown has been married to his wife, Blythe Newlon since 1997.

Does Dan Brown Have Any Children?

Yes, he and his wife have a son named David Chinchilla who was born in 1998.

Did Dan Brown Go to College?

Yes, he did. After finishing high school, he went to Amherst College, where he was a member of the Glee Club.

What is Dan Brown Famous For?

Dan Brown rose to fame with the release of his fourth book, The Da Vinci Code in 2003. Responsible for his success, it has since become one of the most popular novels of all time, with tens of millions of copies sold worldwide.

The last that we’d heard, Dan Brown and his family lived in New Hampshire. Unfortunately, that’s all the information that we have at this time.

What Kind of Car Does Dan Brown Drive?

We do not have any information on Dan Brown’s vehicle at this time.

How Much Money Did Dan Brown Make Last Year?

Information on Kareem Dan Brown’s 2017 earnings are not available.

What’s the author up to? If you’re a fan of his work, why not keep up with his activities by following him on social media? You can find Dan Brown on Twitter at @AuthorDanBrown (account run by his office). If you’re on Facebook, you can also check out his official fan page for the latest news and updates here.