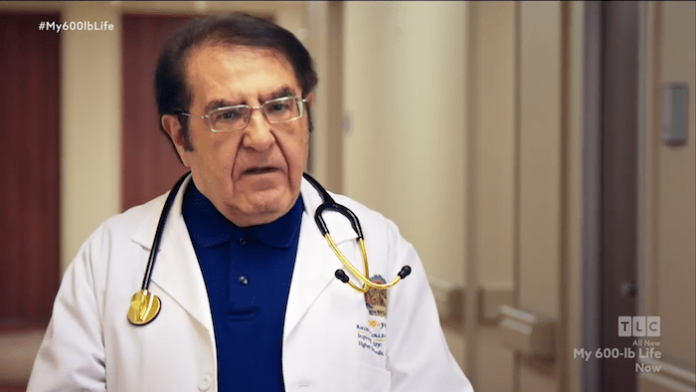 A Houston physician, Dr. Nowzaradan is best known for his appearances on TLC’s reality series, My 600-Lb Life. A renowned surgeon who specializes in bariatric surgery, he has been helping obese patients for over four decades. Today, he continues to do so in his Houston clinic- one of the locations featured on the show, which is currently on its sixth season.

In the past, he has been featured in several other reality series such as Half Ton Dad, Shrinking the World’s Heaviest Man, Half Ton Teen, and Survival of the Half Ton Teen. As of 2018 however, My 600-Lb Life is his only active project on television.

How successful is the man behind the TLC reality show? How wealthy is the weight-loss surgeon? According to the information that we could find online, Dr. Nowzaradan’s current net worth hovers at $4 million. How much of this came from his work on My 600-Lb Life? Let’s have a look.

How did Dr. Nowzaradan Make His Money & Wealth?

Born and raised in Iran, Dr. Nowzaradan went to the University of Tehran, from which he received his medical degree in 1970. From there, he relocated to Tennessee, where he did a general surgery residency. Wanting to specialize further, he eventually went for another thoracic surgery residency in Texas. Since then, he has practiced at a number of hospitals including Renaissance Hospital, First Street Hospital, and University General Hospital, to name a few.

In 2012, the surgeon began to star in the reality television series, My 600-lb Life. Premiered on TLC, each episode revolves around a different morbidly obese patient, whose weight starts off at around 600 pounds. Under the care of Dr. Nowzaradan, they ultimately go on a weight loss journey, which begins with a strict diet; in some cases, some individuals may require a gastric bypass surgery.

While the physician receives a fair amount of screen time on the show, it has not been revealed how much he makes from his appearances. Considering how long he’s starred on the series, however, it’s likely that he’s earned a significant amount from TLC.

In terms of other television appearances, Dr. Nowzaradan has been featured in a handful of other titles in the past such as Bodyshock, Half Ton Dad, Half Ton Teen, Shrinking the World’s Heaviest Man, and Survival of the Half Ton Teen. Since the early 2010’s however, My 600-lb Life has been his only TV project.

When he isn’t filming for the show, he practices medicine at his Houston clinic. Noted for being the first surgeon to adopt laparoscopic surgery, he has helped numerous patients throughout his medical career. For those who are curious, general surgeons are said to make upwards of $275,000 a year in the United States.

In terms of other projects, Dr. Nowzaradan has also authored a book titled, Last Chance to Live, which focuses on his four-decade-long career in treating obese patients. Published by Paperback, it has garnered mostly positive reviews from readers.

As far as we know, he is currently single. In the past, he was married to Delores Nowzaradan from 1975 to 2002.

Does Dr. Nowzaradan Have Any Children?

Yes, he has three children with his ex-wife; in fact, his son Jonathan is the producer of the TLC reality series, My 600-lb Life.

Did Dr. Nowzaradan Go to College?

Yes, he went to the University of Tehran in Iran, where he received his medical degree.

What is Dr. Nowzaradan Famous For?

Dr. Nowzaradan is best known for his appearances on TLC’s reality series, My 600-lb Life, which focuses on the lives of several morbidly obese patients.

Dr. Nowzaradan currently lives in Houston, Texas, where he continues to practice medicine. We do not have any pictures of his home at this time.

What Kind of Car Does Dr. Nowzaradan Drive?

At this time, we do not have any information regarding Dr. Nowzaradan’s vehicle.

How Much Money Did Dr. Nowzaradan Make Last Year?

Information on Dr. Nowzaradan’s 2017 earnings is not available.

As mentioned earlier, Dr. Nowzaradan is currently starring in the sixth season of TLC’s My 600-lb Life, which premiered on January 3, 2018. When he isn’t filming for the reality show, he is practicing medicine at his clinic.

Did you know that you can follow the reality star/physician on social media? That’s right- you can find Dr. Nowzaradan on Twitter at @YNowzaradan. On Facebook, he also has an official fan page set up, which you can check out here.