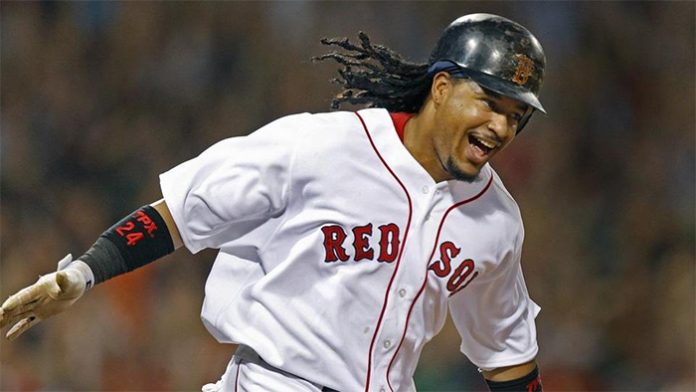 A professional baseball player, Manny Ramirez made his MBL debut with the Cleveland Indians in the early 90’s. Often regarded as one of the best right-handed hitters of all time, he has won numerous awards including the World Series champion title as well as the Silver Slugger Award, among many others.

Despite a successful career, however, he was forced to retire after testing positive for hCG in 2009. Having said that said, he eventually made a comeback in 2011 with the Oakland Athletics, Chicago Cubs, and Texas Rangersーthough he ultimately did not appear in another Major League game.

How wealthy is the 46-year-old athlete? How much has he earned from his professional baseball career? What were the details of his contracts with the teams? How is he doing for himself nowadays? According to various websites, Manny Ramirez’s current net worth sits at an estimated $110 million. Wondering where exactly he earned this fortune from? We’ll be taking a look at this below.

How did Manny Ramirez Make His Money & Wealth?

Born on May 30, 1972, in the Dominican Republic, Manny Ramirez spent thirteen years in Santo Domingo, before moving to New York City at the age of thirteen. As a young boy, he often played ball at Snake Hill, a nearby park. Fond of sports, he eventually joined the baseball team at George Washington High School, with whom he went on to play at three division championships.

After being named School Player of the Year in 1991, he was selected by the Cleveland Indians in the 1991 MLB draft. Though the exact details of the contract have not been disclosed, it’s said that he received a signing bonus of $250,000. Two years later, he made his major league debut in a match against the Minnesota Twins in 1993. However, it wasn’t until a little later that he had his breakout season. After batting 31 home runs, he was named to the All-Star Team in 1995. From there, he signed a four-year extension with the team for an alleged $10.15 million.

In the end, Ramirez stayed with the Cleveland Indians for seven years; he played his final game against Toronto in 2000.

Despite having been offered a $119 million contract by the Indians shortly afterward, he chose to reject the deal. Instead, he later signed with the Boston Red Sox for $160 million. Over the next several years, the team played against numerous opponents including the Toronto Blue Jays, and Oakland Athletics.

In the end, it wasn’t until 2008, that he was traded to the Los Angeles Dodgers. According to reports, the two parties had agreed on a $45 million, two-year contract. That year, Ramirez was also selected for the All-Star team for the twelfth time.

A couple of seasons later, he was claimed by the Chicago White Sox in 2010. As part of the deal, the team assumed the remaining $3.8 million of his salary.

Not long afterward, it was announced that Ramirez had signed a $2 million contract with the Tampa Bay Rays in 2011. After testing positive in a drug test later that year, however, he was forced to retire (more specifically, he chose to retire instead of being suspended).

Yes, Manny Ramirez has been married to his wife Juliana for many years.

Does Manny Ramirez’s Have Any Children?

Yes, he has a son named Manny Ramirez Jr. from a previous relationship, and two others named Manuelito and Lucas with his wife Juliana.

Did Manny Ramirez’s Go to College?

No, Manny Ramirez did not go to college- in fact, he had left high school before graduating. Shortly afterward, he was drafted by the Cleveland Indians in 1991.

What is Manny Ramirez’s Famous For?

Manny Ramirez rose to fame as a professional baseball player in the mid-90’s. Throughout his MBL career, he played with a handful of teams including the Cleveland Indians, Los Angeles Dodgers, Boston Red Sox, and the Tampa Bay Rays, among a few others.

Manny Ramirez and his family live in Weston, Florida. Unfortunately, we do not have any images of his abode to share at this time.

What Kind of Car Does Manny Ramirez’s Drive?

We do not have any information on Manny Ramirez’s vehicle at this time.

How Much Money Did Manny Ramirez’s Make Last Year?

Information on Manny Ramirez’s 2017 earnings is not available.

Last year, it was announced that he would be playing for the Kochi Fighting Dogs, a baseball team that’s part of Japan’s Shikoku Island League Plus.

Want to know what the NFL star is up to? If so, why not give him a follow online? You can find Manny Ramirez on Twitter at @TheRealManny99 or on Instagram at @MannyRamrez2499. For the latest news and announcements, don’t forget to also check out his official website at mannyramirez.com.