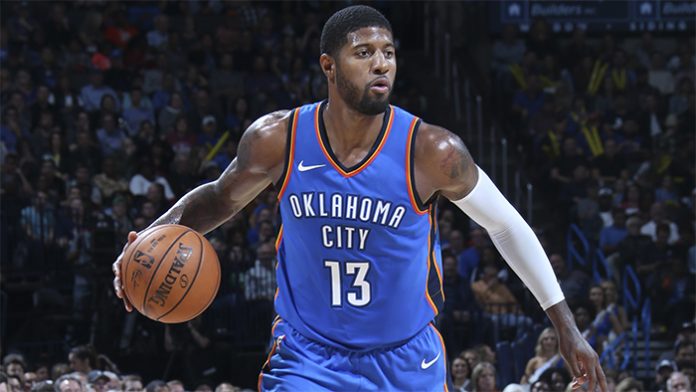 A professional basketball player, Paul George launched his NBA career as a member of the Indiana Pacers in the early 2010’s. A five-time NBA All-Star, his talents on the court have led him to be named five times to the NBA All-Star Team and three times to the All-Defensive Team and the All-NBA Team.

After playing for the Indiana Pacers for seven years, during which he received several awards, he was traded to the Oklahoma City Thunder in 2017. Later that fall, he made his debut in a match against the New York Knicks.

How wealthy is the NBA star? How much did the athlete make from his contract with the Oklahoma City Thunder? From his career with the Indiana Pacers? As far as we know, Paul George’s 2018 net worth is at an estimated $20 million. Where did these funds come from? Let’s find out below.

How did Paul George Make His Money & Wealth?

Born on May 2, 1990, in Palmdale, California, Paul George has been fond of basketball ever since he was young. Growing up, he idolized Kobe Bryant and often rooted for the Los Angeles Clippers and the Los Angeles Lakers. Eventually getting involved with the sport himself, he joined the varsity basketball team during his freshman year at Knight High School. By the end of his senior season, he had received many awards, including the Golden League Most Valuable Player title.

Upon graduating high school, he committed to Santa Clara University, as they were the first to have offered him a scholarship. After a discussion with his high school coach about keeping his options open, however, he changed his mind. In the end, he chose to play for California State University. Two years into his college career, it was announced that he would be entering the 2010 NBA draft.

After much speculation on which team he would join, he signed a two-year contract with the Indiana Pacers, one that was reportedly worth $3.9 million. A few months later, he made his NBA debut, in a match against the San Antonio Spurs. A spectacular win, George later become one of only two rookies to be part of the team’s starting lineup. By the end of the season, he had been named to the NBA All-Rookie Second Team.

In 2013, it was announced that the Pacers had not only extended his contract but had also elected him to be the team’s designated player. Given that he was able to either be elected into the All-NBA Team or be the MVP during the season, he would receive ~$90 million as part of the extension deal. In the end, he played for the Indiana Pacers for seven years, until 2017.

Last summer, George was traded to the Oklahoma City Thunder in exchange for Domantas Sabonis and Victor Oladipo. Since his debut for the Thunder, he has scored against many teams including the New York Knicks, Los Angeles Clippers, Toronto Raptors, and Memphis Grizzlies, to name a few.

While he isn’t married, he has been in a relationship with model Daniela Rajic for a few years.

Does Paul George Have Any Children?

Yes, he has two children, as well as one on the way with his girlfriend.

Did Paul George Go to College?

Yes, he did. After high school, he continued his basketball career at California State University, Fresno, where he played for the Fresno State Bulldogs.

What is Paul George Famous For?

Paul George rose to fame as a member of the Indiana Pacers after being selected in the 2010 NBA draft. After seven years with the team, he was traded to the Oklahoma City Thunder last summer.

At this time, we do not have any information on Paul George’s location, nor do we have any pictures of his home.

What Kind of Car Does Paul George Drive?

How Much Money Did Paul George Make Last Year?

According to various sources, it’s said that Paul George earned a little over $19.5 million in 2017.

As mentioned earlier, Paul George was recently traded to the Oklahoma City Thunder last summer. Since then, he and the team have won against many opponents including the Los Angeles Clippers, Memphis Grizzlies, and New York Knicks.

What’s the NBA star up to nowadays? If you’re a fan of the basketball player, why not follow Paul George online? You can find him on a few platforms such as Twitter at @Yg_Trece or on Instagram at @Ygtrece. As an alternative, you can also show your support by liking his official Facebook fan page here.