What Happened to Kash Biermann? – 2018 Update 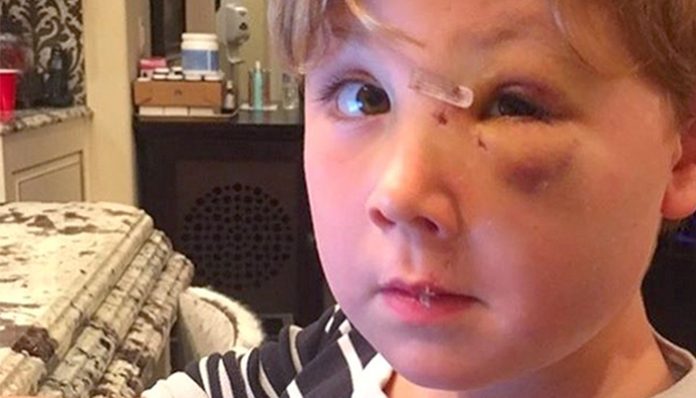 Last year, headlines were made after Kim Zolciak’s son Kash, was rushed to the hospital after suffering injuries from a dog attack. Four years old at the time, the incident had nearly led the young boy to be blind. What had happened? What were the circumstances surrounding the incident?

Over the past few months, many have wondered- how is the preschooler doing nowadays? Has he completely healed from the attack? We’ll be answering these questions below so be sure to stick around if it’s something you’re curious about!

What Happened to the Kash Biermann? 2018 Recent Update

Following the terrifying dog attack, the four-year-old spent several hours in the operating room. For the first few days, the family provided very few details about the incident; the only thing that Zolciak-Biermann initially shared was that her son would likely be returning home in a few days.

Even in subsequent interviews, the Real Housewives of Atlanta star had refused to name the dog or the owner of the dog. Ultimately, it wasn’t until a few months later, that it was revealed that Kash had been bitten by their very own dog, Sinn, a husky-boxer mix- news that came as a shock to fans.

A “heavily, heavily trained” dog, Sinn’s attack on Kash made “absolutely no sense” to the family. When prompted further, it was revealed that the two had been playing in the yard of their Atlanta mansion, when the incident occurred. Also present at the scene, was his six-year-old brother, KJ. At the time, her husband Kroy had been cleaning the yard using a leaf blower. Ultimately, they believe that it was the said machine that had set off the canine.

How’s Kash doing nowadays? According to the reality star, he’s almost completely healed from the attack. As far as what happened to Sinn, the dog, the family had decided to keep him after they learned from several canine specialists that the four-year-old had actually been bitten, and not attacked. To be more specific, he had nipped at the preschooler’s face in an attempt to communicate with him. Though that isn’t an excuse for the “attack”, the Biermanns believed that Sinn had known he had done wrong.

Though they love him all the same, the family has since made a few changes to keep a closer watch on Sinn. For example, his crate is now locked at night, and he is muzzled and watched when out in the yard. Not only that, but he only gets to run free in a dog run that they’d built for him after the incident.

In terms of how the scary experience has affected Kash, it hasn’t, not really. In fact, he’s still a huge dog lover, as seen from the video clips on his mother’s Snapchat.

Last spring, the reality star revealed that her son had been injured in a terrifying dog attack through Instagram. At the time, her four-year-old son Kash had been playing outside of the family home with his brother, KJ. Supervised from afar, their father was out with them, albeit busy cleaning the yard with a leaf blower. According to the Biermanns, it was this gardening tool that had set off their dog; before they knew it, the yard was filled with screaming and barking.

Dripping blood, his parents quickly wrestled him out of the dog’s grip and took him to the hospital, where he underwent emergency surgery. For a period, it was unknown whether or not he would be losing his vision in one eye. Fortunately, however, doctors were ultimately able to save his eye. Still, the experience proved to be traumatic for everyone involved.

In the end, Kash stayed in the hospital for four days before going home. As for what happened to Sinn, he was initially removed from the house; it wasn’t until after the family had learned from a few canine specialists that he had “bitten” and not “attacked” the four-year-old, that they decided to keep him. In fact, Kash himself had also asked to see the dog. After all, Sinn has always been “his favorite, without a shadow of a doubt”, according to the reality star.

For a while, it was unknown whether or not Kash would require further surgery to align his face (due to the swelling and trauma). According to a recent follow-up shared by Kim however, his plastic surgeon has since confirmed that he will not be needing additional surgeries as he is “pleased with his progress.” In fact, he still has perfect vision in both eyes!

As for whether or not the attack has left the four-year-old afraid of dogs, it doesn’t seem like it- in fact, he’s still very much an animal lover; his mother even expressed that it wouldn’t be surprising if he were to become a vet in the future.