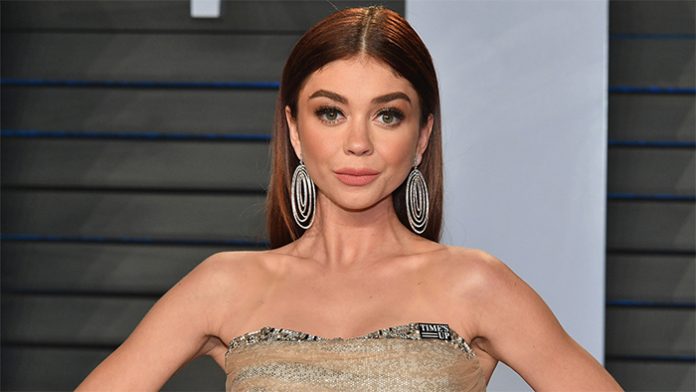 An American actress, Sarah Hyland rose to fame for her portrayal of Haley Dunphy in the sitcom Modern Family. Critically acclaimed, her performance has garnered her many accolades including a Screen Actors Guild Award and a Critics’ Choice Television Award nomination. Some of her other noteworthy TV credits include Lipstick Jungle, Dirty Dancing and Geek Charming.

In addition to her television career, Hyland has worked on several films over the years such as Struck by Lightning, Scary Movie 5, Vampire Academy, and See You in Valhalla. In fact, she is working on a romantic comedy called The Wedding Year, both as an actress and as an executive producer.

How much is she paid for her starring role in Modern Family? How wealthy is she as an actress? According to various online sources, Sarah Hyland’s current fortune stands at around $9 million. What proportion of this came from the ABC sitcom? Let’s have a look at this below.

How did Sarah Hyland Make Her Money & Wealth?

Born on November 24, 1990, in New York, Sarah Hyland grew up in Manhattan, where she attended the Professional Performing Arts School. Like most actresses, she began her career at a young age. When she was still in elementary school, she landed her first role in the 1997 film, Private Parts. From there, she appeared in a few television series such as Another World, Trinity, and The Audrey Hepburn Story.

By the mid-2000’s, she had appeared in several other titles including Law & Order: Special Victims Unit, Touched by an Angel, One Life to Live, and All My Children. From there, she landed a recurring role in the comedy-drama, Lipstick Jungle, which starred Brooke Shields, Kim Ravers, and Lindsay Price.

Not long afterward, she received a big break in the form of a sitcom called Modern Family. Cast as Haley Dunphy, one of the main leads, her performance quickly captured the hearts of viewers. Critically acclaimed, her portrayal has since earned her several accolades including three Screen Actors Awards, and a Glamour Award, among many nominations.

How much is she paid for the starring role? A few years ago, it was said that she was paid $75,000 per episode. From then until now, the main cast has successfully negotiated a raise in salary; according to Deadline, Hyland, as well as the rest of her fellow co-stars has been earning at least $100,000 per episode since 2017. Needless to say, Modern Family has contributed a significant amount to her overall wealth.

In addition to Modern Family, the actress has appeared in countless other television series over the past decade including Randy Cunningham: 9th Grade Ninja, Bonnie & Clyde, The Lion Guard, Dirty Dancing, and Shadowhunters.

Though her main focus is on the small screen, she has also worked on several films in the past. For instance, her appeared in the movies Vampire Academy, See You In Valhalla, XOXO, and Lego DC Comics Super Heroes: Justice League. Currently, she is working on The Wedding Year, a romantic comedy that she will also be producing.

No, as far as we know, she is currently single. In the past, she dated Matt Propkop; after years of physical and verbal abuse, she obtained a restraining order against him in 2014.

Does Sarah Hyland Have Any Children?

No, Sarah Hyland does not have any children.

Did Sarah Hyland Go to College?

No, as far as we know, Sarah Hyland has not attended college. Instead, she chose to pursue a career as an actress.

What is Sarah Hyland Famous For?

Sarah Hyland rose to fame for her portrayal of Haley Dunphy in the popular sitcom, Modern Family, a role that she plays to this day.

According to her Twitter bio, Sarah Hyland currently resides in Los Angeles. At this time, that’s all the information that we have available.

What Kind of Vehicle Does Sarah Hyland Drive?

We do not have any information on Sarah Hyland’s vehicle at this time.

How Much Money Did Sarah Hyland Make Last Year?

Information on Sarah Hyland’s 2017 earnings is not available.

Aside from her starring role in Modern Family, she has recently made appearances in the shows Lip Sync Battle, Dirty Dancing, and Shadowhunters. As a voice-actress, she also lent her voice to Tiifu in the animated series, The Lion Guard: The Rise of Scar.

As far as her film career goes, she is currently working on the movie The Wedding Year.

What’s the actress up to nowadays? If you’re a fan of the Modern Family star, why not follow her on social media? You can find Sarah Hyland on Twitter at @Sarah_Hyland or on Instagram at @SarahHyland. On Facebook, she also has an official fan page which you can check out here.