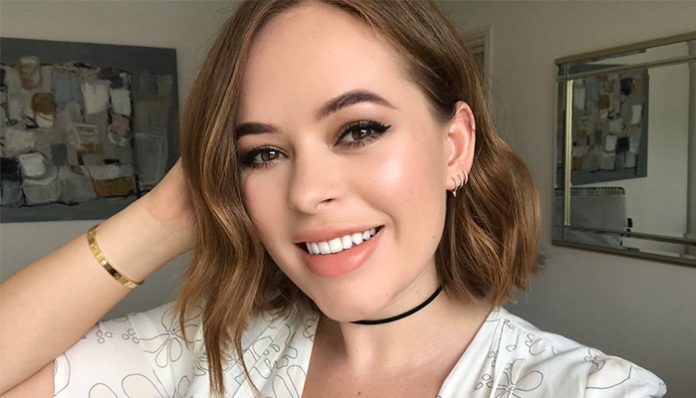 An Internet celebrity, Tanya Burr is best known for her YouTube channel, which has gained over 3.6 million subscribers since 2009. Over the years, she has worked with many other YouTubers such as Joe Sugg, Alfie Deyes, Alfie Deyes, and Louise Pentland. Aside from YouTube, she also has a significant following on Instagram and Twitter— more than 6 million followers combined, to be exact.

In terms of other projects, the brunette has also dabbled in acting. For instance, she acted in the short film Disconnect in 2017. Since then, she has also made her stage debut in a production of Confidence.

How wealthy is the YouTuber? How much does she earn from making videos? From her other endeavors? According to various websites, Tanya Burr’s 2018 net worth stands at around $2.2 million. What proportion of this came from her online career? This is one of the questions that we’ll be addressing below.

How did Tanya Burr Make Her Money & Wealth?

Born on June 9, 1989, in Norfolk, England, Tanya Burr grew up in Norwich, where she went to Long Stratton High School. After graduating, she went to a cosmetics school briefly, before landing a job at the beauty counter in a local department store. Ultimately, it was while she was working there that she decided to create a YouTube channel.

Though she started off with makeup tutorials, she eventually branched out to include other content (e.g. fashion, baking, style). As her presence grew, she also had the opportunity to collaborate with other YouTube stars such as Joe Sugg, Tyler Oakley, Louise Pentland, and Zoe Sugg.

With the audience that she has (her videos regularly receive hundreds of thousands of views, if not more), chances are, she pulls in a significant amount of income from her channel. According to NailBuzz, Burr’s videos generate around $250 a day from ad revenue; this works out to be around $90,000 a year.

Aside from her YouTube channel, the twenty-something has been involved with several other projects. For instance, she recently made her acting debut in the 2017 short film, Disconnect. Since then, she has also made her stage debut in a production of Judy Upton’s Confidence, where she plays the starring role of Ella.

Not only that, but she has published three books— Love, Tanya, Tanya Bakes and Tanya’s Christmas, the last of which was released in October 2017.

In 2014, she also launched her own cosmetics brand called Tanya Burr Cosmetics through the British retailer, Superdrug. According to Stylist Magazine, one product was sold every two minutes in 2016.

Now that we know more about her, let’s go back to our original question- where did she earn the majority of her income from? From everything that we’ve said above, it’s clear that the earnings from her YouTube channel are the most significant. With that said, she does make a decent amount from her acting gigs, books, and brand of cosmetics as well.

Yes, Tanya Burr has been married to Jim Chapman, a fellow YouTuber since 2015. They had tied the knot after dating for eight years.

Does Tanya Burr Have Any Children?

No, Tanya Burr does not have any children that we know of.

Did Tanya Burr Go to College?

No, as far as we know, she did not go to college. Having said that, she did study to become a makeup artists after graduating high school.

What is Tanya Burr Famous For?

Tanya Burr is best known for her YouTube channel, which has over 3.6 million subscribers to date.

Tanya Burr currently lives with her husband in London, England. We do not have any pictures of his abode at this time.

What Kind of Car Does Tanya Burr Drive?

Details on Tanya Burr’s vehicle is not available at this time.

How Much Money Did Tanya Burr Make Last Year?

Information on Tanya Burr’s 2017 earnings is not available.

Last month, she made her stage debut in a production of Confidence, where she played the starring role of Ella. Since then, she has also appeared as an extra in the film Bulletproof.

Want to follow Tanya Burr on social media? You can find her on several platforms including Instagram and Twitter at @TanyaBurr. On Facebook, you can also show your support on her official fan page here.