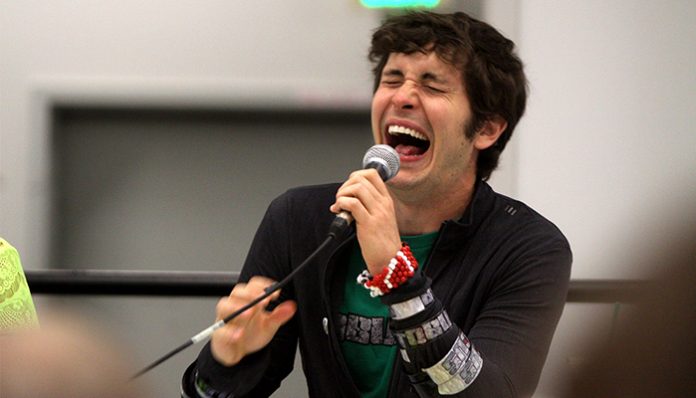 An internet celebrity, Toby Turner initially rose to fame on YouTube in the mid to late 2000’s. Known for his sketch comedies, his videos quickly attracted countless of viewers worldwide. As of 2018, he has amassed more than 14 million subscribers combined across three channels.

In the recent years, he has also dabbled in acting. For instance, he has played various roles in the films The Great Gilly Hopkins, Bob Thunder: Internet Assasin, and Why Him?. Similarly, he has also worked on a few television series such as Stranger Things, Law & Order: Special Victims Unit, and The High Fructose Adventures of Annoying Orange.

How wealthy is the YouTube star? How much does his channel make from ad revenue? How much does he make as an actor? What other projects is he involved in? According to various sources, Toby Turner’s current net worth is around $4 million. Below, we’ll be taking a closer look at his career.

How did Toby Turner Make His Money & Wealth?

Born on March 3, 1985, in Osborn, Mississippi, Toby Turner grew up in Niceville, Florida. After graduating high school, he went to the University of Florida, where he studied telecommunication production. From there, he began to share videos on YouTube, making good use of a video camera that his mother had bought him. His primary channel- “Tobuscus” was created on May 14, 2006.

A comedy channel, he soon began to upload a variety of comedic skits and animated sketches. Before he knew it, he had earned himself a decently sized fanbase on the site. Fast forward to 2018, and he has amassed more than 6.2 million subscribers, with over 1.3 billion lifetime views. Considering those numbers, it’s not surprising to know that he pulls in a decent amount of income from YouTube (i.e. ad revenue).

Since his rise to fame, Turner has launched two additional channels- TobyTurner, and TobyGames, the latter of which is dedicated towards gameplay videos. As of 2018, he has gained over 8.5 million subscribers combined across the two accounts. Of course, the content from both of the channels would also be monetized.

In addition to his successful career on YouTube, Turner has also been involved with other ventures, one of which includes acting. In 2012, he made his feature film debut in the romantic comedy, New Low, where he starred alongside Valerie Jones and Jayme Ratzer. Since then, he has also appeared in the movies Bob Thunder: Internet Assasin, The Great Gilly Hopkins, and Why Him? to name a few.

Likewise, on television, he has played various roles in shows such as Stranger Things, The High Fructose Adventures of Annoying Orange, and Law & Order: Special Victims Unit. At one point, he even lent his voice to one of the characters in the animated sitcom, American Dad! in 2016.

As far as other projects go, he has also released three books through Teen Books. A journal-style series based on Tobuscus Adventures, it’s said that a fourth title will come out sometime later this year.

As far as we know, Toby Turner is currently single. Most recently, he dated Jaclyn Glenn from 2015 to 2016. Previously, he had also been in relationships with Melanie Murphy, Olga Kay, and Tara Babcock.

Does Toby Turner Any Children?

No, Toby Turner does not have any children that we know of.

Did Toby Turner Go to College?

Yes, he went to the University of Florida, from which he received a bachelor’s degree in telecommunication production.

What is Toby Turner Famous For?

Toby Turner rose to fame for the comedic sketches on his original YouTube channel, Tobuscus. Since then, he has launched two other channels- TobyTurner and Tobygames.

Since last year, he has been residing in Washington, with his dogs. We do not have any other details at this time.

What Kind of Car Does Toby Turner Drive?

Information on Toby Turner’s vehicle is unavailable at this time.

How Much Money Did Toby Turner Make Last Year?

Unfortunately, we do not have details on Toby Turner’s 2017 salary at this time.

Aside from his YouTube channels, which he continues to update on a regular basis, Turner has recently appeared in a film titled The F*** Happened in 2017. Around that same time, he also released his third book through Tegen Books.