What Happened to the Cornelia Marie? – 2018 Update 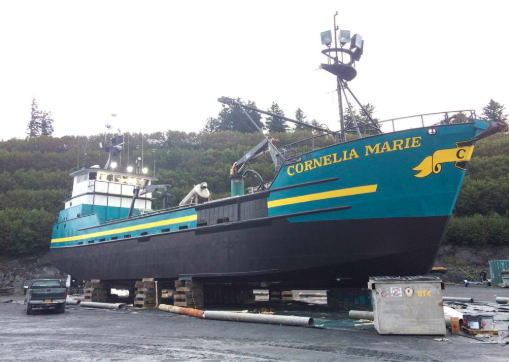 A commercial fishing boat, the FV Cornelia Marie gained recognition after being featured on the Discovery Channel’s reality series, Deadliest Catch. Named after its original owner, the fishing vessel was initially captained by Phil Harris at the beginning of the show. Since then, it has been headed by several others individuals including Josh Harris, Tony Lara, Derrick Ray, and Casey McManus.

Having been on the show since season one, many viewers were shocked to learn that the Cornelia Marie would not be returning for season thirteen. What caused it to be absent from the series? What were the circumstances? These are some of the questions that we’ll be addressing below.

After being featured on the show for twelve seasons, it was announced in 2016 that the Cornelia Marie would not be returning for season thirteen. Surprising news for fans, the announcement had come in the form of a Facebook video, which Captain Josh Harris had posted onto Facebook, along with a written statement.

According to what was said, the decision not to include the ship in the thirteenth season was made by the production company; in fact, it was not his crew’s decision at all. In his words, the Cornelia Marie’s absence had nothing to do with a dispute over money- instead, it was “simply a decision made by production Discovery” as “they have creative control over pretty much everything.”

To the pleasant surprise of everyone, however, the ship has since returned for the fourteenth season, which recently premiered on April 10, 2018. What led Cornelia Marie and the crew to come back? According to captain Casey McManus, it’s because they have a “huge love and appreciation” for the fans. Not only that, but they wanted to keep Phil- his grandfathers’ legacy going, as he had passed away last December.

Having said all that what was Cornelia Marie’s crew up to during season 13? For Captain Casey McManus, those few months had been difficult due to “a lot of family issues”, according to a recent interview. As it’d turned out, he needed to be at home at with his family- since he did not have to film for The Deadliest Catch at the time, it all worked out.

As far as his reunion with the Cornelia Marie, he was more than ecstatic. In fact, he had “kissed it when [he] saw it.” Though things will obviously be different without Josh, he’s excited to try the boat’s new electronics and machinery, as it recently went through a major overhaul.

More About the Cornelia Marie

Built in Bayou La Batre, Alabama, the Cornelia Marie was commissioned by Ralph Collins, its original owner in 1989. Named after his wife Cornelia, it was one of the last boats built by Horton Boats. Designed for commercial fishing, it can be used to catch crab, herring, as well as salmon.

After the couple divorced, the wife Cornelia Marie, took ownership of the vessel. Eventually, she sold a partial share to Phil Harris, the first captain to be featured on Discovery Channel’s The Deadliest Catch.

The documentary series itself, premiered on television on April 12, 2005. Produced by Original Productions, it portrays the real life events abroad commercial fishing boats during Opilio crab, Alaskan King Crab, and Bairdi crab season. Aside from the Cornelia Marie, which made its debut in the first season, the show has featured several other vessels such as the Northwestern, Saga, Wizard, and Summer Bay, among a couple of others.

Over the years, the crew of the Cornelia Marie has gone through many changes. For one thing, it has been captained by a handful of different individuals over the past decade. For instance, the boat has been headed by Casey McManus and Josh Harris since season ten. Tragically, the original captain Phil Harris had passed away after suffering a stroke during the sixth season of the show. Despite having shown initial improvements at the hospital, he died from complications on January 29, 2010.

Due to issues with the production company, it was announced in 2016 that the Cornelia Marie would not be returning for the new season of The Deadlest Catch, despite having been featured in all the previous seasons. As a result, other fishing vessels were focused upon instead- these include the Northwestern, Saga, Summer Bay, Wizard, and Brenna A.

To the pleasant surprise of fans however, the boat and the crew has since come back for the fourteenth season, which premiered on April 10, 2018. As with the previous seasons, it is currently being captained by Josh Harris and Casey McManus.

As of June 2018, eleven episodes have aired on the Discovery Channel (the latest of which aired on June 11, 2018). For those who are tuning in, the show is currently on a short break and will be returning to television with new episodes on August 8, 2014.