Delighted By After Shark Tank – 2018 Update

Delighted By Before Shark Tank

Makenzie Mazluff has always had an entrepreneurial spirit. The Los Angelos native founded a smoothie bar in Arizona called Osaka Sun Blendery, as well as two businesses in Australia before she got the idea for her desert hummus company, Delighted By.  The organization was founded in the spring of 2015 after Makenzie decided to bring chickpea “cookie dough” to a party, to the surprise of the delighted guests. She developed a line of 8 dessert hummus flavors, such as Brownie Batter, orange-ginger, oatmeal raisin, and snickerdoodle, among others. She and her partner got a loan on Kiva for $10,000, and they began to sell the product at farmer’s markets. Let’s see if the Sharks will be as taken with the innovative new dessert.

Delighted By on Shark Tank 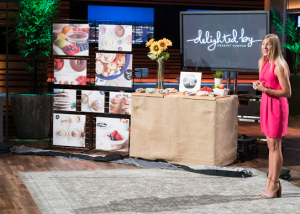 Makenzie Marzluff walked out onto the stage and into the Shark Tank. She introduced herself and said that she was an entrepreneur from Los Angeles. She requested $600,000 in exchange for 12% of her company, Delighted By. She began the presentation by asking the Sharks that everyone on the stage had a sweet tooth. Lori nodded in agreement. Makenzie continued, stating that most people have to walk through aisles of tasty treats as they shopped, and it’s nearly impossible to walk out without something.

Makenzie said that she had invented the guilt-free alternative. Delighted By it was a dessert hummus, which was made from chickpeas but tasted sweet. She said that it tasted more like healthy cookie dough instead of hummus. She claimed that the product was 100% non-GMO, gluten-free and vegan. It also had less than 5 g of sugar per serving. She ended the presentation by asking the Sharks which one of them wanted to dip in and be delighted by a sweet deal.

She began to pass out samples. Mark was the first one to get up, and he passed a plate to Lori. As the Sharks each thanked her intern, Makenzie said that she had brought brownie batter hummus on a pretzel, snickerdoodle hummus on an apple, vanilla bean hummus on a graham cracker and choco-mint hummus on the cupcake. Each of the Sharks took a bite. Mark explained that it was good so enthusiastically that he had to be bleeped out.

Makenzie insisted that it was a healthy alternative to a dessert. Alex Rodriguez, the guest Shark for the episode, asked Makenzie where she got the idea for the business. Makenzie told him that her background was in nutrition and culinary. She was going to his Super Bowl party one day and she wanted to create cookie dough dip that was healthy. She experimented with chickpeas in the blender. When she brought it to the party, people ate it right up thinking it was cookie dough.

All of the Sharks were impressed, saying that it was very good. Barbara started to get down to business. She told Makenzie that she had a very large price on the company, so she must have very big sales to go along with it. Makenzie told her that they had just launched 13 months before the filming of the episode and were able to hit the $1 million mark in gross sales. The Sharks expressed their awe at her numbers.

Kevin asked how she had been so successful because the refrigerated section was notoriously difficult to get into. Makenzie admitted that was. Kevin said that she must be kicking someone else out to get that space. She said that they were currently in 1200 stores, and she had rented a van and drove up and down the East Coast to all 80 Wegmans stores by herself. She told the Sharks that she was literally sleeping on coolers full of hummus for the trip.

Alex Rodriguez wanted to know how much money she had invested so far in the business. She said that she had personally put in $20,000, and had raised $400,000 from friends and family. Her first round of investment was done at a valuation of $4 million. Kevin wanted to know what her sales projection will use for the full year. Makenzie told him that she thought it would be $1.5 million in sales. Kevin pointed out that she was asking him to pay 33 times that amount. He said that there are other big players to already had the refrigerator space and could hope hack exactly what she was doing very quickly.

Makenzie looked put off. She asked them to look at all of the big players that were currently purchasing,’s company is. She said that they had Pepsi. Before she could finish, Mark said that they were in hummus company. Makenzie instantly retorted that they were taking their shelf space. Alex said that in a business like she had, he would love to come in and pay 5 to 10 times net earnings. He said that she was almost north of 30 times, so he went out.

Kevin said that he liked the business but not the valuation. He wanted to know if she would be flexible on it at all. Makenzie looked insulted and said no. Even though he was out, Alex told her that he wanted her to consider that not every capital is the same going forward. The money that she raised from the Sharks would be much more valuable than what she raised from friends and family. Makenzie said that she felt like she was giving a fair valuation because she knows what this category requires.

Barbara said that she had learned a few things about delegating at a young age. She said that 80% was good enough in terms of the work that they produced. She thought that Makenzie would have a difficult time of multiplying herself to hire people, and building relationships. Barbara didn’t think that that was Makenzie’s forte.

Mark asked her how open to change that she would be. He thought that it would be way too hard to sell it in grocery stores because it would require someone demonstrating it to sample it. He asked her if she would be willing to open up a retail store for herself. Kevin asked him if he was thinking like an ice cream store, and Mark said that he was. Kevin said that he was crazy. Mark thanked him. He said that the business owners who it made him the most money were the craziest. Kevin said that he knew that they would never agree on the valuation, so he wasn’t going to fight her on that. Instead of making an equity offer, he decided to offer her a $600,000 loan.

Mark offered her $600,000 in exchange for 25%. Kevin said that he basically cut her valuation in half. Kevin said that he just wanted to move up her balance sheet. Mark said that he was willing to be both an equity investor and the lender. She would have to hit certain benchmarks, but there would always be cash available. She asked if he believed that they could build it to an $80 million valuation, and he said that he could.

Mark told her that the decision was not supposed to be easy, and asked her to make one. Makenzie took a minute to think about it. Mark said that she had a genius product but not a company yet. Makenzie agreed. Mark said that it was going to take a lot of effort in order to turn her great idea into a company. Once she was confident that Mark is going to help her out with everything, she told him that they had a deal.

After she walked offstage, Makenzie told the camera that she had a vision for her four-year mark. She wanted people of parties to offer their guest hummus, and for the guest to ask if it was sweet or savory. She truly believes that delighted by was creating a new category and that Mark Cuban would be able to assist her in that goal. Back in the Shark Tank, Mark was explaining the virtues of opening up a little retail store to sell the hummus. Alex Rodriguez said that he liked it because it would need to be big – maybe just 600 ft.². Both Barbara and Kevin said that it was a bad idea. We’ll see how they did.

Delighted By Now in 2018 – The After Shark Tank Update 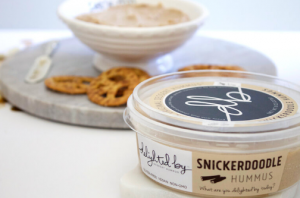 According to an interview by Business 2 Community, Delighted By experienced the Shark Tank effect even though two out of the five Sharks thought it was a terrible idea. She told the publication that both orders and interest in the spreadable dessert have picked up exponentially since the taping and the airing of the episode. They have new retailers that are interested in picking up the product for sale in their stores. The article was written in December of 2017, and at that time, Makenzie said that her next goal was to bring Delighted By to grocery stores nationwide. It seems like they are working on that goal. Instead of just appearing in Wegmans, they are now in other large retailers such as Acme and Walmart.