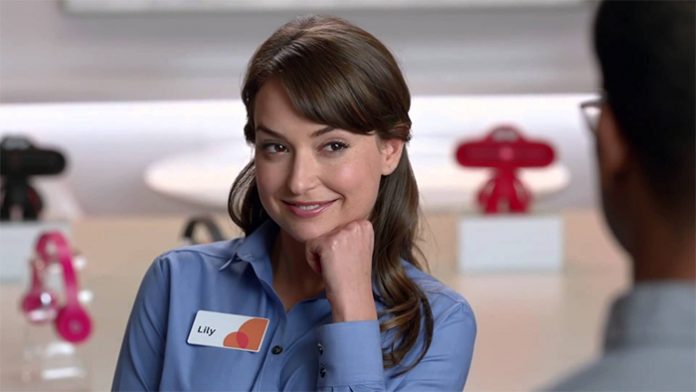 An American actress, Milana Vayntrub initially gained fame for playing the role of Lily Adams in the AT&T television commercials. As far as TV series go, she has worked on many titles including Lizzie McGuire, Key & Peele, House of Lies, Other Space, and This is Us, among several others. Later this year, she will be starring as Squirrel Girl in the Marvel’s New Warriors.

In addition to her work on television, she has appeared in a few films such as Ghostbusters, Life Happens, and Junk. Not only that, but she has been featured in several web series including Daddy Knows Best, Wrestling Isn’t Wrestling, That Moment When, and CollegeHumor Originals.

How well-paid is the actress? How much has she earned from her various acting gigs? How wealthy is she? According to various sites, Milana Vayntrub’s current net worth is around $500,000. Where did she earn the majority of this money from? Let’s have a look below.

How did Milana Bayntrub Make Her Money & Wealth?

Born on March 8, 1987, in Tashkent, Milana Vayntrub and her parents emigrated to the United States when she was still a toddler. Settling in West Hollywood, she started to act in television commercials at the age of five. In her teens, she attended Beverly Hills High School briefly, before dropping out during her sophomore year. Eventually getting a GED, she went to the University of California, San Diego, where she studied communications. Afterwards, she trained with the improv comedy group, Upright Citizens Brigade.

Prior to getting involved with television, she ran a YouTube channel with Stevie Nelson, which is perhaps best known for their web series Let’s Talk About Something More Interesting. Ultimately, it wasn’t until the early 2010’s, that she started to make herself known on TV. In 2013, she portrayed a perky saleswoman named Lily Adams in a series of AT&T commercials, which gained her widespread attention. Around that same time, she also appeared in the shows Food Network Star and Zach Stone is Gonna Be Famous.

Over the next couple of years, she worked on several other series including House of Lies, Silicon Vally, Other Space, and Californication. From there, she played the role of Sloane Sandburg, a recurring character in the Golden Globe-nominated television drama This is Us from 2016 to 2017. Later this year, she will be playing the lead protagonist, Squirrel Girl in the series Marvel’s New Warriors.

In terms of other ventures, she has also appeared in a handful of films including Life Happens, Junk, and Ghostbusters. Most recently, she lent her voice to Squirrel Girl in the animated superhero movie Marvel Rising: Secret Warriors. Last year, she also played the part of Jill in a web series called That Moment When.

Going back to our original question, it’s likely that most of her income comes from her work on television. If anything, her earnings are likely to go up, seeing as how she will be starring in Marvel’s upcoming series later this year.

As far as we know, Milana Vayntrub is currently single. In the past, she dated John Mayer from 2006 to 2007.

Does Milana Vayntrub Have Any Children?

No, as far as we know, Milana Vayntrub does not have any children.

Did  Milana Vayntrub Go to College?

Yes, she did. After receiving her GED, she went to the University of California, San Diego, where she studied communications.

What is Milana Vayntrub Famous For?

Milana Vayntrub initially gained fame for portraying the perky sales manager in the series of AT&T television commercials. Since then, she has worked on a number of TV series including House of Lies, Silicon Valley, Love, and This Is Us.

Unfortunately, we do not have any details on Milana Vayntrub’s location at this time, nor do we have any photos of her abode.

What Kind of Car Does Milana Vayntrub Drive?

How Much Money Did Milana Vayntrub Make Last Year?

Unfortunately, we do not have any information on Milana Vayntrub’s 2017 earnings at this time.

As mentioned earlier, she will be starring in the upcoming television series Marvel’s New Warriors later this year. Created by Kevin Biegel, the show’s cast will also include Derek There, Jeremy Tardy, Matthew Boy, and Calum Worthy.

Want to keep up with the actress? You can find her on a few social media platforms including Twitter and Instagram @MintMilana. On Facebook, you can also show your love and support by liking her official fan page, which you can check out here.