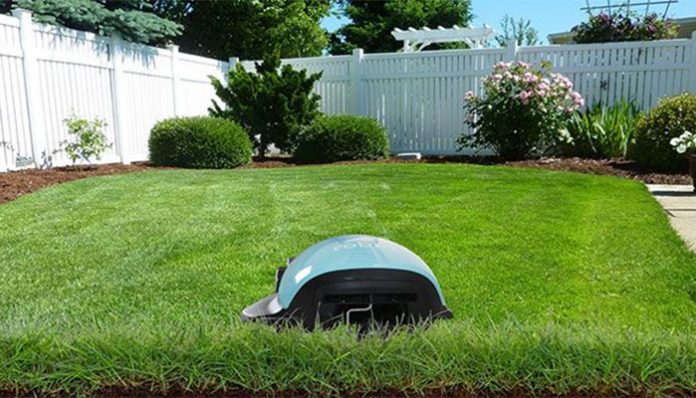 The world’s first robotic lawn service, Robin Autopilot provides homeowners with a convenient way of mowing their lawn—all while limiting noise, and air pollution. Fully electronic, landscaping has never been easier with the use of their tiny robots. While other companies have utilized similar technology in other countries, Robin is currently the only company to be using them for lawn services in the U.S.

As the company grew, the pair began to search for new ideas that could be incorporated into the business. Ultimately, it was after they read a news article about Roomba that they decided to explore the option of using robotic lawn mowers. To their surprise, however, they soon learned that robots were already being utilized for lawn care in Europe. With that, they took it upon themselves to bring it to the U.S.

Getting to work, the pair soon came up with a new business model, one that made use of Roomba-like lawnmowers. With customized mowers from manufacturers such as Posited and Robomow, they eventually turned the idea into reality. By 2017, the company had fully committed to robotic mowing—a decision that prompted them to rebrand themselves as Robin Autopilot.

As one thing led to the next, the founders landed themselves an opportunity to pitch their company to a panel of investors on ABC’s hit show Shark Tank. Featured in the ninth season last fall, the episode had aired on November 12, 2017, in the U.S. 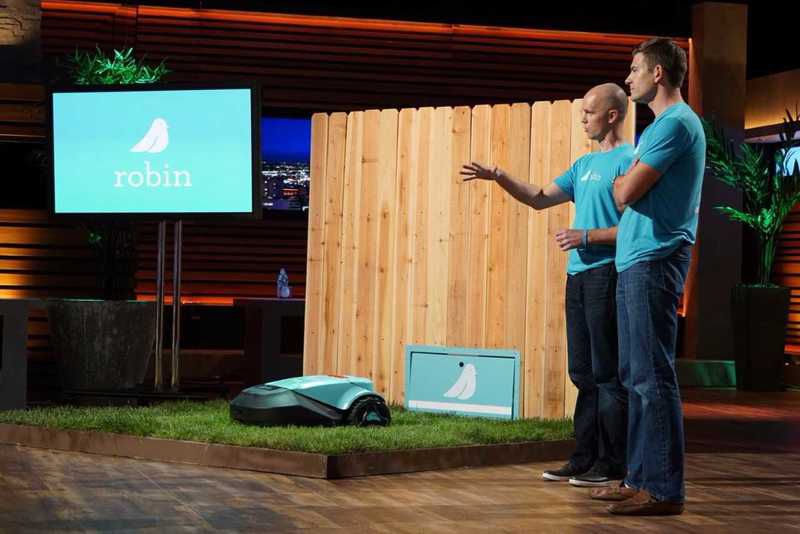 Making their way into the tank, Bart and Justin introduce themselves, before telling the sharks that they’re after a $500,000 investment for 5% of their company.

Launching into their pitch, Justin shares that Americans spend $70 billion on lawn care services every year. Making a point, he goes on to highlight the fact that gas-powered mowers are harming the planet. Noting that we live in an era where there are electric cars that can drive themselves, he raises one question—“why are lawns still being mowed by a guy pushing a gas-powered mower, something that emits as much pollution as eleven cars?”

Noting that there’s a better way to mow your lawn, Bart directs the panel’s attention to the setup besides them. As the camera pans towards a small, iRobot-like machine, he tells them that their company, Robin has launched the world’s very first robotic lawn mowing service. With that, everyone focuses on the mower, which has proceeded to mow a small patch of grass. Describing the process, Bart states that the robot cuts a little bit of grass every time, while the clippings fall back to the ground and act as a fertilizer.

Continuing, Justin explains that there is a wire that runs underneath, which allows it to know where the edge of the yard is. Just as he finishes saying that a clip of the installation process is shown on the television screen. As Robert confirm the facts, the founders look on, before adding that the mowers use proven, robotic mower technology from Europe, which is then combined with high-quality human crews. “A more environmentally friendly lawn care solution”, he finishes his pitch by stating that they need one of the sharks on their side. 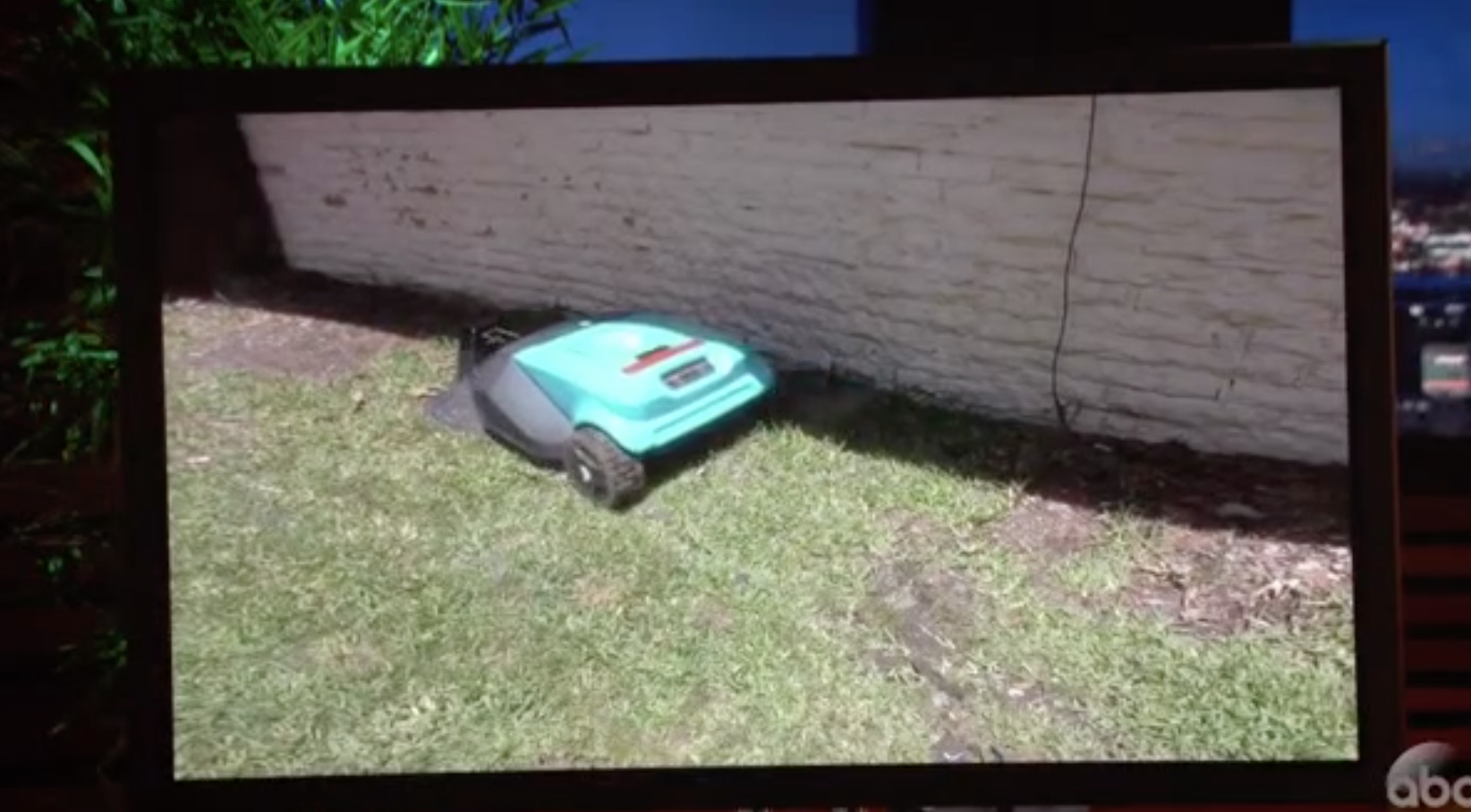 Seconds later, Robert asks the founders about the mower’s power source, to which Justin replies that each robot has their own docking station. Pointing toward the television screen, he tells him that they automatically  “go home” following a day of work. With further prompting, the founders explain that they buy the robots from Europe, and sell the service in the U.S—“ similar to how homeowners already pay landscaping services.”

Mentioning that there are over a million robotic mowers installed in Europe, Lori raises the question of whether or not it is a service or an individually owned product, to which they say the latter. Reiterating the fact that Robin is the world’s first robotic lawn service, Justin goes on to say that each of the robots cost $1800 to $1900. Highlighting the benefits of the service, he explains that customers only have to pay $17 a week, to use the machines.

Asked about the entire process, Justin tells them that customers are able to subscribe to three different plans on their website—$17/hr, $25/hr and $37/week, depending on the services that they’re seeking. Stating that it’s not all automated, Justin explains that they have crews that take care of “edging and other work.”

Going into the history of Robin, Justin tells the sharks that the two of them had started an “Uber-for-lawns” type of service over two years ago. Continuing, he mentions that they did 100,000 jobs per month, which brought in over $400,000. Asked how much money they do from the business annually, the founder says that they are just under a $5 million run rate. Moments later, Daymond confirms whether or not the new robotic lawn service is done under their current business, to which they reply yes. 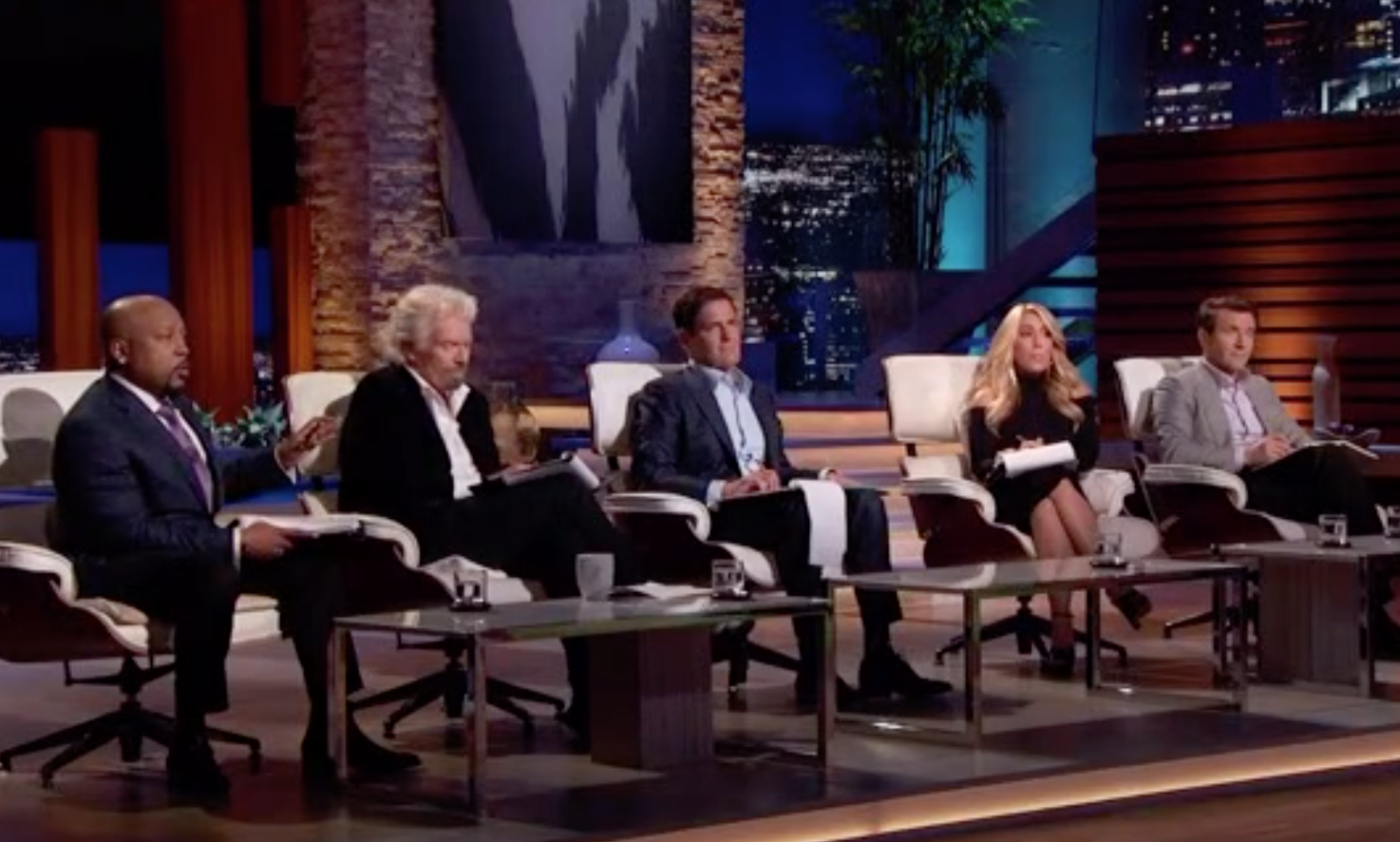 As he looks towards the sharks, Justin states that their goal is to move all of their customers into using robotic mowers, as it is more environmentally friendly and has greater margins. Noting that margins are not the issue, however, Mark is quick to remark that the challenge lies with the capital cost. Asked what it costs per customer, Justin reveals that the manufacturers are very eager to bring the system to the US, and have agreed to give them the machines for no money upfront.

Elaborating further, he explains that the customers are charged for the first month, after which Robin pays the manufacturers $44 during the second month, as a lease model on the mower. To that, Lori comments that the manufacturers are probably eager to sell the machines to individuals in the U.S. Though he agrees, Justin points out that it wouldn’t be capable of the other services such as mowing, edging and weeding.

From there, Richard asks them about their background. The first to talk, Bart lets them know that he grew up on a grain farm in Indiana, and had enlisted in the military shortly after 9/11. An operations and logistics officer, he reconfirms the fact that he has always been “a logistics guy.”

Next, Justin tells them that he grew up in a small town in Michigan, where his parents were a couple of teachers. Continuing, he tells them that he went to business, as that’s where his passion laid. Having gotten an MBA at Harvard, he explains that he eventually moved down to Austin, where he worked on a few startups for a few years. From there, he met Bart through a mutual friend, and the two came up with the lawn care idea.

Looking at the founders, Robert subsequently asks about their fundings and team, to which Justin replies that they’ve raised over $3 million and have 10 full-time staff members, as well as 80 crews which they contract. Inquired about their sales, Justin says that they did $3 million last year. Asked whether or not they’ve gained or less, he reveals that they’ve lost as “they’ve been spending very aggressively.” Prompted further by Daymond, he states that they had lost $1 million last year, which elicits a response from the sharks.

From there, Mark asks about their monthly burn rate. In response, the founder says that they’re at $100,000 a month. Defending the number, he states that they can break easily anytime they want as soon as they stop investing in the acquisition. To that, the shark comments that it is not a cheap business to get into, which causes the rest of the panel to talk among themselves.

Noting that she’s a “product person”, Lori goes on to comment that she sees the robotic mower as more of a product than a consumer service. Because of those reasons, she soon backs out. Next, the attention goes to Mark. Despite seeing it as a “winner” however, he mentions that there are two issues—that there is a long horizon in terms of getting a return on investments and that a lot of money has to be invested in order to scale. Due to those challenges, he also drops out. 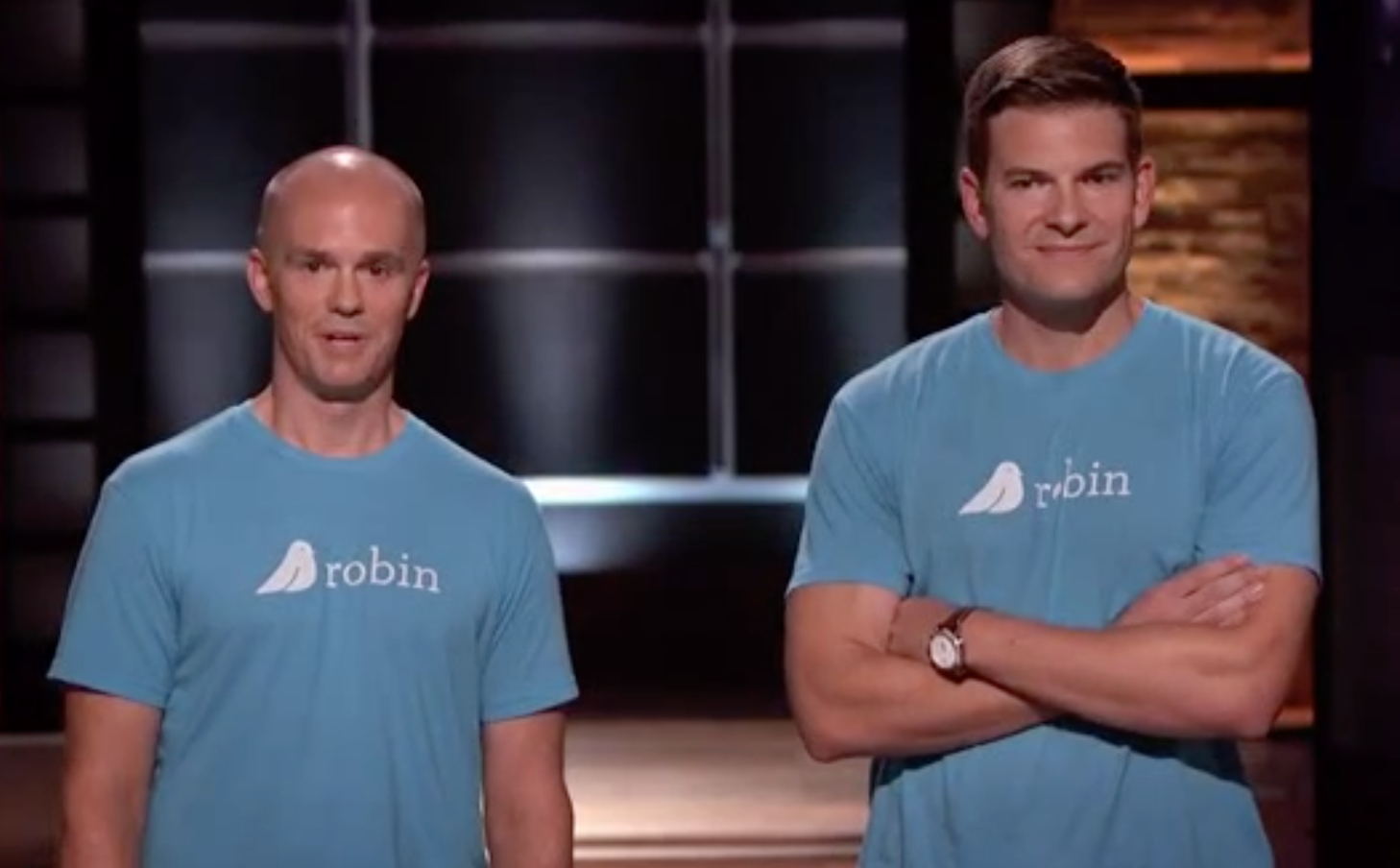 With three sharks left, the founders look to Richard, who begins to speak. While he admits that they’re neat, however, he tells them that he can’t see the $10 million valuation. Seconds later, he also backs out of offering them a deal. With that, Robert comments on how impressed he is with how much they’ve done in sales over the past year. Noting that he doesn’t see a “tipping point”, the shark becomes the fourth to back out.

To their dismay, however, Daymond—the last shark also drops out after a brief talk about their company. Nonetheless, the panel offers their congratulations on what they’ve managed to accomplish.

Robin Autopilot in 2018 – The After Shark Tank Update

Well over half a year has passed since Justin and Bart pitched their automatic lawn mowing service on Shark Tank. How are they doing nowadays?

Not long after the episode aired, the founders sold the “Uber-like” business in order to focus their attention entirely on robotic mowing (In fact, they were already negotiating the deal during filming!). From there, they launched a new franchise model, which aims to address one of the biggest concerns that Mark had on the show, regarding the labor for installation. Over the past several months, Robin has signed and launched three franchises in Newark, Raleigh, and Kalamazoo. The last that we’d heard, they had expected to begin service this summer.

Though the sharks ultimately didn’t bite on the show, the company was ultimately able to land a major investment from MTD Products, as well as from other investors, just a few months later, that were able to meet their valuation target.

In terms of what the company’s next steps are, the founders have stated that they plan on becoming “THE brand in residential lawn care through their network of franchise owners and technological edge” according to a recent interview.

As far as what the company has been up to the last couple of months, it was announced that they had completed strategic funding to expand their Robotic Mowing Franchise nationwide this May. For more information, you can visit their official website or social media pages—you can find them on Facebook, Twitter, and Instagram.

Unfortunately, seeing as how they didn’t manage to get a deal on the show, it’s unlikely that they will be returning for an update anytime soon. Nonetheless, however, the company seems to be doing fairly well nowadays, especially with their new franchise endeavor.