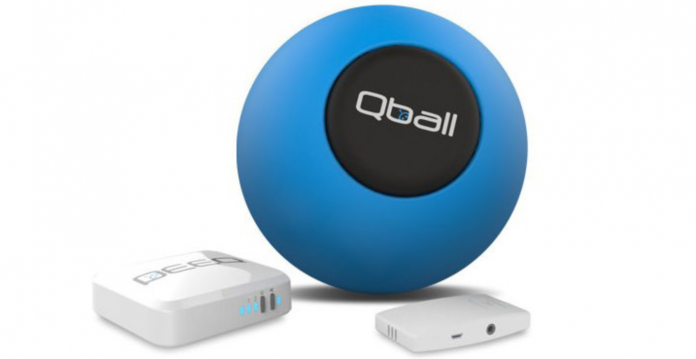 In the about section on the QBall website, Shane says that he had difficulty in school when it came to hearing the lesson and understanding the other kids in his class. In order to fix this problem for others, he came up with his new invention, which would allow anyone holding the ball to be heard. Before appearing on Shark Tank, Shane Cox worked hard to bring his new idea to trade shows and into schools. Before even setting foot in the Tank, he was able to sell $177,000 worth of the QBall.

In 2016, Shane ran a campaign on Indiegogo. His original goal was for $30,000. At that point, the design was finalized and they had a few working prototypes. They wanted their potential backers that there might be unforeseen issues with the manufacturing. Regardless, they were able to raise $46,895 from more than 300 backers. That was 156% of the original goal of $30,000. Let’s see if the sharks will be as taken with the QBall. 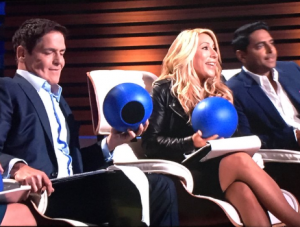 Shane Cox walked out onto the stage wearing a turquoise shirt, khaki shorts, and socks up to his knees. He blew the whistle he was wearing around his neck and introduced himself to the Sharks. He told them he was from Raleigh, North Carolina. He told him he was on the Shark Tank seeking a $200,000 investment in his company QBall in exchange for 15% equity in his company. Shane held up his invention, which was a soccer ball sized blue ball with the hole on top. He told them it wasn’t just an ordinary ball. He said that was actually a wireless microphone. The Sharks seemed impressed.

Shane continued his presentation, stating that the ball was a fun way to engage and interact with others. They could toss it, roll it, and even dropped the mic. He insisted that the QBall was a great addition to any classroom. He said the kids love it because it makes learning fun and interactive, and it also helps teachers make classroom discussions easier and more fun. Shane said that it makes sure that every student could be heard.

Shane insisted that the QBall wasn’t just for the classroom. He said it could be used for events. During Q&A time, it was often hard for everybody to hear when an audience member had a question. The QBall could be the solution to that. He continued, stating that it was easy to set up whether you were using desktop speakers or a full audio system. Shane ended his presentation by asking which one of the Sharks wanted to get the ball rolling with his invention.

As he ended the presentation he held up the ball as if to throw it. Mark and Lori both put their hands up, but Shane acknowledged that Mark was first. He tossed the ball to Mark Cuban. Mark said a few words into it to test it out. Rohan, the guest Shark of the day, asked what it was connected to. Shane explains that there is a little receiver that connects to the audio and the ball. He let them know it was just a regular audio output that needed some speakers.

Lori Greiner of QVC fame wanted to know if she could get a sample. Shane let her know that Mark was holding the only one that was operational, but at least she could get a feel for it. He tossed her one, and she caught it. Robert wanted to know what the main reason why someone would purchase one was. As he asked his question, the rest of the Sharks on the stage each got a sample. Shane said that the primary application was in the classroom. He said that there have been studies done about acoustics in the classroom. With inadequate sound staging, students could mess every third word and be unable to fill in the blanks.

Rohan wanted to know how much it cost. Shane explained that it was $179 for the retail price. It costs them $52 in order to make it. Mark asked him if he had sold any to date, and Shane told him that they’d sold $177,000 worth. The Sharks seemed impressed. Robert asked him if all of the sales were to schools, and he told him that schools accounted for 90% of the sales he’d made. Other customers were public speakers and research groups. Shane informed the Sharks that he didn’t have any help. He went himself to trade shows.

Lori asked him if he had a patent. Shane explained that there’s a patent pending for the feature that let him throw it without eliciting the noise from the machine. It has sensors in it that let it know that it’s being thrown. It went to sleep. Mark said that that was clever. Robert said that he likes the idea, but didn’t see it as a viable one. He thought it would be hard to sell. He asked Shane how he would sell to the entire state of California without calling up every single school.

Shane told him that a large percentage of his market was teachers. He said that the teachers enjoy being known as the cool techie teacher, and would purchase the school supply right out of their pocket. He said that once it was in one classroom, it was easy to sell the rest of the school. Mark told him that he is doing a great job, but that he’d shown the challenge for the company. He wanted to know how Shane planned on scaling the business down the line in one or two years. Shane projected that he would be at $650,000 by the end of the year.

The Sharks thought that that was unrealistic. Mark asked how he was going to get from $177,000 in the first half of the year to more than double that at the end. Shane told him that schools had bought one or two to test, and then said that if they liked it they would purchase more down the line. Barbara asked him how many teachers came back to order more after they bought one ball as she gestured to him with the one she was holding. Shane let her know that well he doesn’t get reorders from the teacher, he would be contacted by the principal of the school to order in bulk.

Robert said that he owns a global cybersecurity company. While it was large, they don’t sell to lots of governments or schools because the process was difficult. Robert thought that he would be old and gray by the time he saw the money on his return. He went out. Mark went to know what he would use the money for. Shane let them know that he is planning on buying inventory with it. He was having difficulty developing a consistent marketing push because he couldn’t keep the Q Ball in stock. He kept running out.

Lori wanted to know if it could be used with the Polycom. Shane let her know that it could since it was just a simple audio out function. Lori nodded and said that she couldn’t stand being in conferences with people who didn’t know how to move closer to the Polycom on the call. It was a real issue for her, and she could see his product solving it. Mark wants to know if he had done any corporate sales, but Shane said that he hadn’t concentrated on that area. Since it was only him, he had to choose what to focus on. He thought that the schools would be a better market.

All of the Sharks talked over each other, saying that they thought the corporate world would be a much easier sell. Shane said that he saw that there is a lot of different markets that it could be used in, but he didn’t want to spread himself too thin. Lori said that she loved it, and wanted to make him an offer. She wanted another Shark to go in with her. Mark and Rohan volunteered, which means that he had an unprecedented three Sharks that would be working with him. Lori, Mark, and Rohan huddled up to discuss the deal that they wanted to offer. They came up with $300,000 in exchange for 30% equity.

Shane took a minute to think about it. Rohan told him that he thought that he had a really good idea. The three Sharks could help him take it from a vision to a larger platform. Barbara asked him if he was interested in hearing other offers on the table. Shane told her that he loved her as a Shark, but the combo of three was hard to pass up. Shane asked the other Sharks if they would be willing to do it for 25%. Mark said that he respected the fact that Shane countered, but he should realize what value they are bringing to the table. Shane took a second to think about it and said that he was in.

Qball Now in 2018 – The After Shark Tank Update 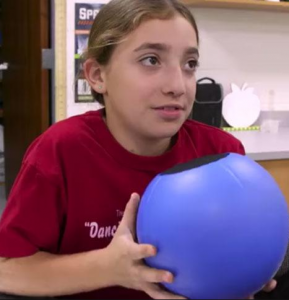 Before Shane walked offstage, all of the Sharks in his deal came up to congratulate him. As they hugged and shook hands, they each told him that the Qball was just what their business needed. Rohan said that he was planning on ordering 30 of the balls right away. Mark Cuban advised that he should get them branded to his personal businesses. Back in the Shark Tank, Robert was teasing Rohan, stating that he knew what Lori and Mark wanted the Qball for, the didn’t think Rohan would be able to make it into a drink. Rohan told him that Robert was just jealous because he went out early and only saw the business in a limited capacity. Rohan said he saw that there is a much bigger picture.

People live-tweeted their responses to the QBall in real time as the episode aired, and the reception was good. Teachers said that they wanted to use it with their students, and one person even suggested that it would be a good play therapy tool for both children and adults. Since partnering up with Lori, Mark, and Rohan, the Q Ball is now integrated with Alexa, the AI from Amazon. They are still attending conferences and tradeshows. After the Shark Tank episode aired, they ran a special where teachers could buy the QBall at a discounted rate.