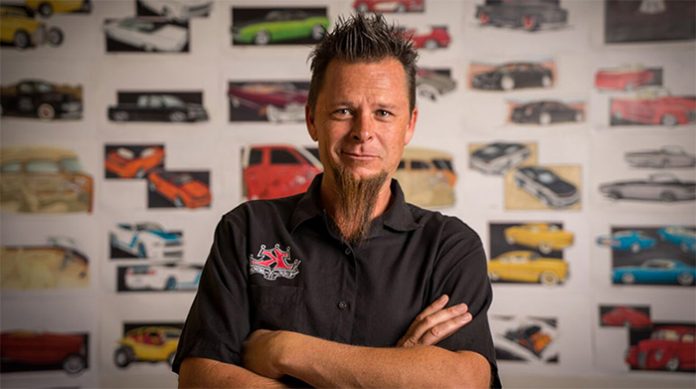 A television personality, Dave Kindig rose to fame as the main star of the reality series Bitchin’ Ride. One of Velocity TV’s most successful programs, it revolved around his car restoration business, Kindig-It Design. Some of the vehicles that he’s worked on in the past include an Audi R8 Spyder, ’62 Volkswagen bus and ’33 Ford Tudor.

At one point in 2015, the show even received a brief sequel called Beyond Bitchin’ Rides, which ran on the same network. As far as we can tell, however, he has not appeared in any other TV titles as of 2018.

How well-off is he? How much was he paid for the reality series? How successful is his car restoration shop? According to various sites, Dave Kindig’s net worth currently sits at around $2.8 million. How much of this came from his work on television? His business? Hopefully, we’ll be able to answer these questions by taking a closer look at his career below.

How did Dave Kindig Make His Money & Wealth?

Hailing from Salt Lake City, Utah, Dave Kindig has always been fond of cars ever since he was young. After completing school, he pursued a career in car designing. Having landed a job at High Performance Coatings, he had the opportunity to meet many other enthusiasts across the country. As one thing led to another, he eventually decided to launch his own design business called Kindig-It Design in 1999.

Located in Salt Lake City, the shop is a joint venture with his wife, Charity, who similar to Kindig, has always been passionate about cars. In fact, opening up their own restoration business has been the couple’s dream for many years. Fast forward to 2018, and the company has customized hundreds of cars.

As it had happened, he was eventually invited to star in his own reality series called Bitchin’ Rides. A Velocity TV program, it premiered in the fall of 2014. Almost immediately, it had drawn in a significant amount of viewers in the U.S. Based around his company Kindig-It Design, each episode follows Dave and his team as they work to rebuild a vehicle for a client. Some of the projects that they’ve worked on in the past include a 62’ Volkswagen bus, ’57 Chevrolet Corvette and ’33 Ford Tudor, among others.

Responsible for his rise to fame, the reality series has since continued for four seasons. In fact, it even received a brief spin-off called Beyond Bitchin’ Rides at one point in 2015, though it only lasted for a few episodes. Having said all that, however, it is not known how much Kindig makes from his appearances on the show. Considering its popularity on Velocity TV, however, the amount is probably nothing to scoff at.

Aside from his television career (which consists of him starring in the two reality series), it’s only natural that he also pulls in a decent amount of income from his car restoration business. If the show is of any indication, the company appears to be doing fairly well.

Yes, he has been married to his wife Charity, for many years. In fact, she also stars on the reality series, Bitchin’ Ride.

Does Dave Kindig Have Any Children?

Yes, the couple has two children together, Drew and Baylee Kindig.

Does Dave Kindig Go to College?

No, as far as we can tell, Dave Kindig has not gone to college.

What is Dave Kindig Famous For?

Dave Kindig rose to fame as the main star of the reality series, Bitchin’ Rides. Premiered in 2014, the program has since continued for four seasons.

What Kind of Car Does Dave Kindig Drive?

We do not have any information on his vehicles at this time.

How Much Money Did Dave Kindig Make Last Year?

Unfortunately, we do not have any information on Dave Kindig’s 2017 earnings at this time.

Most recently, Dave Kindig starred in the fourth season of Bitchin’ Ride. When he isn’t filming for the show, he can be found working away at his custom car restoration shop, Kindig-It Designs.

Want to catch up with the reality star? If so, how about giving him a follow on social media? You can find Dave Kindig on Twitter and Instagram at @DaveKindig. On Facebook, he also has an official fan page, which you can visit here.