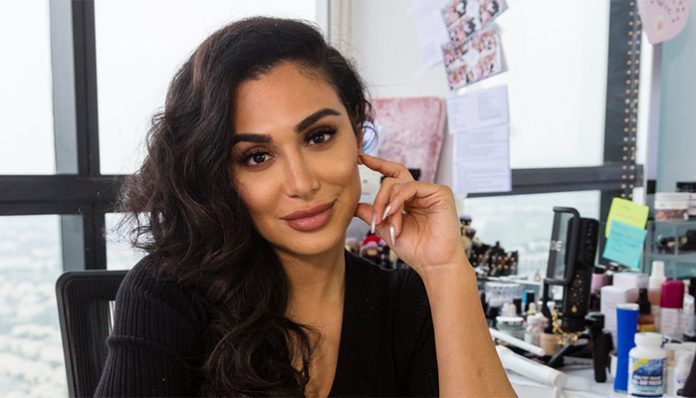 A social media star, Huda Kattan initially made herself known through her beauty blog, Huda Beauty—which reached number one in the Middle East. Since then, she has continued to share her makeup tips on YouTube, on which she has more than 2.4 million subscribers. Perhaps even more impressive, however, is the fact that she has more than 20 million fans on Instagram.

In addition to her online career, she is also a successful entrepreneur. In 2013, she founded her own cosmetics collection called Huda Beauty. Released through Sephora, the line includes a number of beauty products such as liquid lipsticks, highlighter palettes, false nails, and lip liners.

How well-off is the beauty guru? How much does she pull in from her self-titled YouTube channel? According to various sources, Huda Kattan’s 2018 net worth stands at $550 million. How did her fortune come to be? Let’s find out by taking a closer look at her career below.

How did Huda Kattan Make Her Money & Wealth?

Born on October 2, 1983, in Oklahoma City, Oklahoma, Huda Kattan is one of four children. Growing up, she lived in Cookeville Tennessee, before moving with her family to Boston, Massachusetts. Following high school, she went to the University of Michigan-Dearborn, where she studied finance. Ultimately, it wasn’t until a few years later, after she had moved to Los Angeles, that she began to study makeup artistry.

By the time she returned to Dubai, she had landed a job with Revlon as a professional makeup artist. Encouraged by one of her sisters, she eventually started a beauty blog called Huda Beauty in 2010. To her surprise, her makeup tips soon proved to be incredibly popular; it wasn’t long before she had earned herself a significant online following.

Since then, she has also made a name for herself on YouTube. Noted for her makeup tutorials and beauty hacks, she has gained more than 2.4 million subscribers to date, with over 94 million views across her channel. Rising in popularity as we speak, each of her videos easily generates hundreds of thousands of views within a couple of days.

As of 2018, some of her most popular uploads include Toothbrush Blackhead Remover (11.8 million views), How to Fake a Lip Job (For Real) (4.2 million views), Contouring Basics (4.2 million views) and Why Shaving Your Face is Awesome (4.1 million views). With the views that she receives, it’s not surprising to know that she makes a hefty amount from ad revenue. If we were to make a guess, she has probably already earned hundreds of thousands of dollars from the site!

Aside from YouTube, which provides her with a decent income, she also has her own line of cosmetics called Huda Beauty, which was launched in 2013. Released through Sephora, the collection, which consisted of eyeshadow palettes, highlighter palettes, lip liners, false eyeliners, and more, quickly proved to be a major success. Not only that, but she has even started to star in her own reality series on Facebook called, Huda Boss alongside her family.

Yes, she has been married to Christopher Goncalo since 2008; the two had first met when she was still a teenager.

Does Huda Kattan Have Any Children?

Yes, she and her husband have a daughter named Nour Giselle.

Does Huda Kattan Go to College?

Yes, she did. After high school, she studied finance at the University of Michigan-Dearborn.

What is Huda Kattan Famous For?

Huda Kattan initially rose to fame for her beauty blog, Huda Beauty. Since then, she has launched her own makeup collection of the same name.

According to her Twitter location, she currently lives in Dubai, UAE with her family. We do not have any pictures of their abode at this time.

What Kind of Car Does Huda Kattan Drive?

Details on Huda Kattan’s vehicle is not available at this time.

How Much Money Did Huda Kattan Make Last Year?

Unfortunately, we do not have any information on Huda Kattan’s 2017 earnings at this time.

As mentioned earlier, Joe Kenda most recently hosted the seventh season of Homicide Hunter, which ran from August 2017 to February 2018. As far as we can tell, he will be coming back for the eighth season.

What’s the beauty guru up to nowadays? If you’re a fan of her videos, why not follow her on social media? You can find Huda Kattan on Twitter and Instagram at @HudaBeauty. Of course, you can also keep up to date with her on Facebook by following her official fan page.