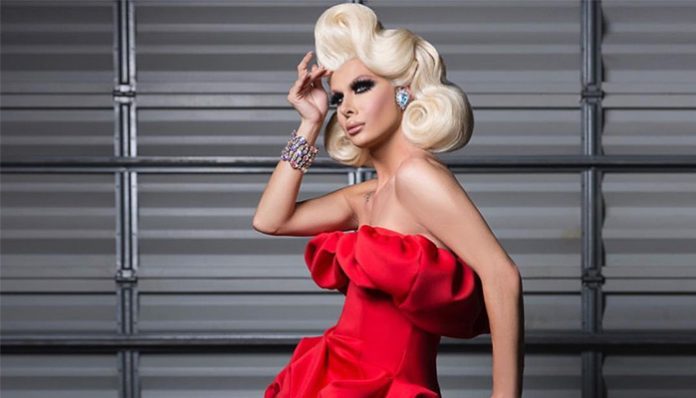 Hailing from Florida, Trinity Taylor recently gained fame in the popular reality competition, RuPaul’s Drag Race. Introduced in the ninth season, she competed for the title of “America’s Next Drag Superstar”, though she ultimately finished in fourth place. Nonetheless, her appearance on the show had earned her a significant fanbase.

Some of the other TV programs that she’s been featured in include Too Funky, Hey Queen, and RuPaul’s Drag Race: Untucked. Earlier this year, she also made a couple of appearances in the music videos Excuse The Beauty and I Don’t Wanna Brag.

Did she bring home anything from the competition? Aside from television, what else is she involved with? How well-off is she? Unfortunately, Trinity Taylor’s 2018 net worth is not available at this time. Since we’re here though, let’s take a closer look at some of her accomplishments.

How did Trinity Taylor Make Her Money & Wealth?

Born on December 10, 1984, in Alabama, Trinity Taylor grew up between Birmingham and Saint Petersburg, Florida. As a teen, she had dropped out of high school in order to take care of her ailing grandmother, who had raised her after her mother passed away. Dared by her friends, she initially started drag at the age of eighteen. Realizing the earning potential, she eventually decided to pursue it as a career.

In 2017, she rose to fame after competing in the ninth season of RuPaul’s Drag Race. Hosted by RuPaul, the show follows a number of contestants as they compete for a chance to win the title of “America’s Next Drag Superstar.” Some of the other competitors included Peppermint, Shea Coulee, Alexis Michelle, Farrah Moan, and Sasha Velour, to name a few.

In the end, after many weeks of competition, Trinity Taylor finished in fourth place. While she didn’t get to take home a prize, her appearances on the show had garnered her a significant amount of attention. By the end of it, she had gained hundreds of thousands of followers on social media.

Immediately afterward, he also appeared on RuPaul’s Drag Race: Untucked!, a companion series that airs following the main program. In addition to focusing on the queens’ conversations backstage, it is also noted for including bonus footage from the runway or workroom.  Since the end of that, Trinity Taylor has appeared in one other TV program—Hey Qween!.

In terms of other endeavors, she has also acted on a couple of occasions. More specifically, she had landed a couple of features in Latrice Royale’s Excuse the Beauty  MV and in Aja’s I Don’t Wanna Brag MV earlier this year.

Where else does her income come from? For one thing, she will be embarking on a tour across the United States later this summer. For more information on the dates and venues, you can visit her official website here. Speaking of her site, she also has her own merchandise store. Some of the items that are available include crew shirts, tank shirts and promotional photographs.

No, she is not married. As far as we know, she is currently single.

Does Trinity Taylor Have Any Children?

No, Trinity Taylor does not have any children that we know of.

Does Trinity Taylor Go to College?

As far as we know, Trinity Taylor has not gone to college. In fact, she had dropped out of high school in order to take care of her grandmother as a teen.

What is Trinity Taylor Famous For?

Trinity Taylor gained fame after competing in the ninth season of RuPaul’s Drag Race in 2017. Since then, she has gained a significant online following on social media.

As far as we can tell, she currently resides in Orlando, Florida. We do not have any additional details at this time.

What Kind of Car Does Trinity Taylor Drive?

Details on Trinity Taylor vehicle is not available at this time.

How Much Money Did Trinity Taylor Make Last Year?

Unfortunately, we do not have any information on Trinity Taylor’s 2017 earnings at this time.

Just last year, she competed on the ninth season of MTV’s RuPaul’s Drag Race, where she finished in fourth place. Since then, she has appeared in two music videos for I Don’t Wanna Brag and Excuse The Beauty.

What’s the drag queen up to nowadays? If you’re a fan, be sure to follow her on social media. You can find Trinity Taylor on Twitter and Instagram at @TrinityTheTuck. On Facebook, you can also show your support on her official Facebook fan page here.