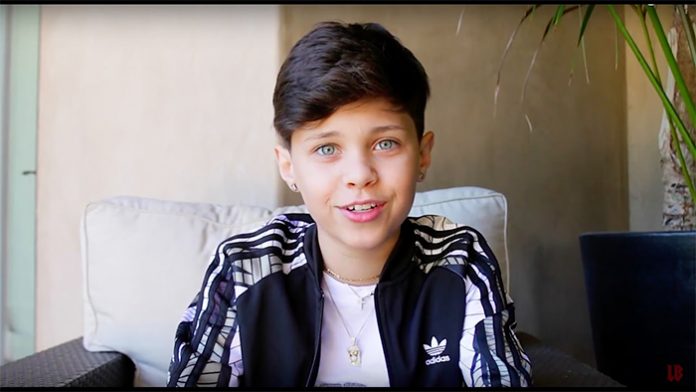 A TV personality, Landon Barker rose to fame after appearing in his family’s reality series, Meet the Barkers. Despite the fact that he was still a toddler at the time of the show, it had earned him a considerable fan base. Aired on MTV, it ran for two seasons from 2005 to 2006.

Since then, he has gained a significant following with more than 246,000 fans on Instagram. On YouTube, he has also amassed over 100,000 subscribers. If anything, his popularity has continued to soar over the past couple of years. In fact, he had just released his debut single, I Don’t Need Her a few months back.

How well-off is the young star today? How lucrative is his social media career? Has he appeared in any other TV programs in the recent years? Unfortunately, information on Landon Barker’s net worth is currently unavailable. Since we’re here, however, let’s take a closer look at some of his accomplishments.

How did Landon Barker Make His Money & Wealth?

Born on October 9, 2003, in Fontana, California, Landon Barker is the son of Travis Barker, the drummer for Blink-182 and The Transplants. The second of three children, he has two sisters named Alabama Luella and Atiana De La Hoya. When he was still a toddler, he made his television debut in his family’s reality series, Meet the Barkers, which premiered on MTV in 2005.

Consisting of 30-minute episodes, the show revolved around the everyday lives of his parents—Travis Barker and Shanna Moakler, the former of whom is the drummer for Blink-182. Despite having only been two years old at the time, Landon also made several appearances in the series, as did his sister Alabama. Relatively popular, it ran for two seasons from 2005 to 2006. As far as we can tell, he has not appeared in any other TV title since.

Instead, he has found success on social media. For instance, on Instagram alone, he has amassed more than 246,000 followers. Rising in popularity as we speak, most, if not all of his posts regularly receive tens of thousands of likes on the platform. Given the audience that he has, it wouldn’t be surprising if he’s managed to earn some money on the side from the app (i.e. endorsements, promotions, sponsorships, etc.).

Aside from Instagram, he has also earned himself a considerable following on YouTube. Since the launch of his channel in 2016, he has gained more than 100,000 subscribers with over 5.4 million views. To date, his most popular upload, NYC: Getting My Nose Pierced has been viewed over 4.7 million times. Given that he continues to grow his channel with regular updates, it wouldn’t be surprising if it eventually yields him another stream of revenue.

Following in his father’s footsteps, he has since also started to pursue music. In fact, he had just released his debut single, I Don’t Need Her on January 13, 2018. Made available for streaming on SoundCloud, the track has already racked up more than 77,000 plays. Similarly, on YouTube, it has been streamed 151,000 times on his channel.

Is Landon Barker in a Relationship?

No, Landon Barker is currently single. Back in 2016, it’s said that he had dated Devenity Perkins.

Does Landon Barker Have Any Children?

No, Landon Barker is too young to have children.

Which School does Landon Barker Go To?

Unfortunately, it has not been revealed which school he attends at this time.

What is Landon Barker Famous For?

Landon Barker has made himself known on social media over the past few years, with hundreds of thousands of followers online. Recently, he also dropped his debut single, which gained significant buzz.

According to his official Twitter bio, Landon Barker currently lives with his parents in Los Angeles, California. We do not have any additional details at this time.

What Kind of Car Does Landon Barker Drive?

Ladon Barker is currently too young to drive.

How Much Money Did Landon Barker Make Last Year?

Unfortunately, we do not have any information on Landon Barker’s 2017 earnings at this time.

As mentioned earlier, Landon Barker recently dropped his debut single, I Don’t Need Her on January 13, 2018. Since then, it has been played well over 100,000 times on YouTube and SoundCloud combined. For now, it’s unknown whether or not he plans on releasing an album sometime in the near future.

What’s the young star up to? If you’re a fan, why not follow his social media accounts? You can find Landon Barker on Twitter at @LandonBarkerr or on Instagram at @LandonAsherBarker. Alternatively, he’s also active on Snapchat at @Landonabarker.