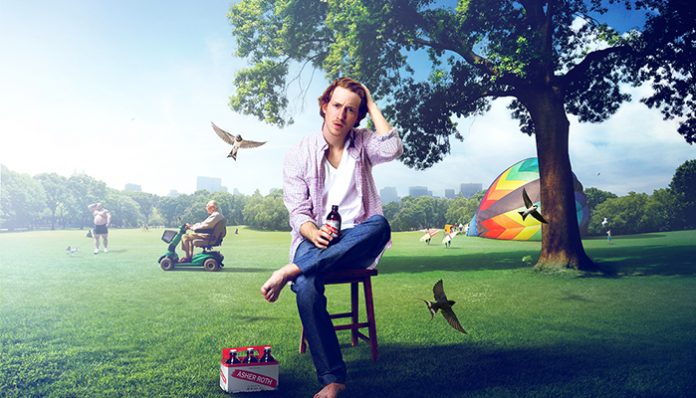 An American rapper, Asher Roth rose to fame with the release of his debut single I Love College in 2009. Since then, he has come out with several other tracks including Lark on My Go-Kart, She Don’t Wanna Man, G.R.I.N.D. (Get Ready It’s a New Day) and Be By Myself.  As of 2018, he also has two studio albums to his name Asleep in the Bread Aisle and RetroHash, both of which have charted in the United States.

In addition to his music career, he has appeared on television on multiple occasions. For instance, he has been featured in Last Call with Carson Daly, Silent Library, Face Off and Late Night with Jimmy Fallon. At one point, he even acted in the 2013 film, $50K and a Call Girl: A Love Story.

How wealthy is the recording artist? How much has he banked from his music career? According to sources, Asher Roth has amassed a net worth of $2 million as of 2018. Where did he earn this money from? Let’s find out.

How did Asher Roth Make His Money & Wealth?

Born on August 11, 1985, in Morrisville, Pennsylvania, Asher Roth grew up in Fairless Hills, where he went to Pennsbury High School as a teen. Upon graduating, he went to West Chester University, where he majored in Elementary Education. Ultimately, it was during that time that he started to post some of his verses onto Myspace. Trying his luck, he eventually sent a friend request to Scooter Braun, the former VP of So So Def Recordings. To his surprise, he soon flew down to sign the rapper within a week.

In 2009, he released his commercial debut single, I Love College. Responsible for his rise to fame, it had peaked at number 12 on the Billboard Hot 100. Outside of the United States, it also charted in Canada, Ireland, Austria, the UK, and Ireland.

Not long afterwards, he followed up with the release of his debut album, Asleep in the Bread Aisle. Featuring guest appearances from Busta Rhymes, Cee-Lo Green, Jazze Pha and Keri Hilson, it gave rise to a dozen tracks including Lark on My Go-Kart, Blunt Cruising, La Di Da and Lion’s Roar. Despite mixed reviews from music critics, it performed relatively well in the U.S., having peaked at number five on the Top R&B and Billboard 200 music charts.

Since then, the rapper has come out with several other projects including the album, RetroHash, which was released in 2014. In addition to that, he has dropped a handful of mixtapes, some of which include Pabst & Jazz, The Greenhouse Effect Vol. 1, Believe the Hype and The Greenhouse Effect Vol. 2. Most recently, he worked with Travis Barker and Nottz on an EP titled, Rather in 2016.

Like many recording artists, he has also appeared on television a number of times. For instance, he has been featured in The Great Hangover Tour, Face Off, Planet Rocke with Taylor Locke, Silent Library and Spike’s Guys Choice. As an actor, he also played a small role in the 2014 film, $50K and a Call Girl: A Love Story.

No, as far as we know, Asher Roth is currently single. In the past, he dated Anna Brothman.

Does Asher Roth Have Any Children?

No, Asher Roth does not have any children.

Does Asher Roth Go to College?

As far as we can tell, Asher Roth has not gone to college. With that said, not much is known about his education background.

What is Asher Roth Famous For?

Asher Roth rose to fame with the release of his debut single, I Love College in 2009. Since then, he has dropped a number of projects including the hit album, Asleep in the Bread Aisle.

We do not have any information on Asher Roth’s whereabouts at this time.

What Kind of Car Does Asher Roth Drive?

Details on Asher Roth’s vehicle is not available at this time.

How Much Money Did Asher Roth Make Last Year?

Unfortunately, we do not have any information on Asher Roth’s 2017 earnings at this time.

Last year, Asher Roth lent his voice to one of the characters in the animated short, Zoovie, which was released on February 19, 2017. In terms of recent music releases, he has dropped two singles this year—Sushi and That’s Cute.

What’s the artist up to? If you’re a fan of his music, why not give him a follow on social media? You can find Asher Roth on Twitter and Instagram at @Asherroth. Of course, you can also check out his official Facebook page for the latest updates and announcements.