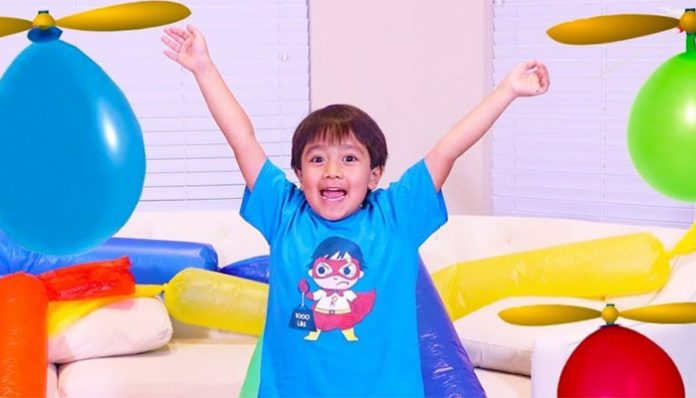 A seven-year-old YouTube star, Ryan’s Toy Review is best known for reviewing children’s toys on his channel, which has amassed more than 15 million subscribers as of 2018. As if that wasn’t impressive enough, they have gained over 24 billion views combined since its launch in 2015. To date, his most popular video, Huge Eggs Surprise Toys Challenge with Inflatable Water Slide has generated over 1.4 billion views.

How profitable is his YouTube channel? How much does he pull in from his videos? Aside from his online endeavors, is he involved with any other projects? How rich is he? According to Forbes, Ryan’s Toy Review has an estimated net worth of $11 million as of 2018. Since we’re here, let’s take a closer look at his accomplishments below.

How did Ryan’s Toy Review Make His Money & Wealth?

Born on October 6, 2010, Ryan first began to appear on YouTube at the age of three. According to an interview with his mom, they had decided to start a channel for him after he’d asked her “why he wasn’t on YouTube when all the other kids are.” Taking him to the toy store, she bought him a Lego train set; it would eventually become the focus of his first video, Kid Playing with Toys Lego Duplo. As of 2018, it has been viewed over 46 million times.

Since then, the channel (which is run by his parents) has grown tremendously. As of 2018, Ryan’s Toy Review has gained over 15.8 million views with more than 24.2 billion views. In addition to Lego, they’ve reviewed numerous other toys over the past few years including Play-Doh, Open Surprise Eggs, Monster Trucks, Disney Planes, and more.

Updated on a daily basis, most if not all of their videos receive millions of views each. Some of their most popular uploads to date include Huge Eggs Surprise Toys Challenge with Inflatable Water Slide (1.4 billion views), Giant Lightning McQueen Egg Surprise (907 million views), Indoor Playground for Kids with Giant Inflatable Slides (346 million views) and Thomas and Friends Giant Ball Pits (300 million views).

Considering the audience that they have, one has to wonder—how profitable is their YouTube channel? According to Nailbuzz, they receive an average of 30 million views per day; assuming that these are monetized views (i.e. display ads), it would generate upwards of $54,000 per day. According to Forbes’ annual list of highest-earning YouTube stars, they had made $11 million (pretax) in 2017. Given that they continue to do what they’re doing, it’s likely that their earnings from the site will only go up with time.

In addition to what they earn from YouTube, it was recently announced that he would be releasing his own line of slime, plushes, and other merchandise at Walmart this year. More specifically, they will be sold exclusively at over 2,500 stores across the United States.

Who are Ryan Toy Review’s Parents?

While his parents regularly appear on his YouTube channel, personal information (e.g. names) has not been disclosed to the public. With that said, it’s known that his mom had quit her job as a high school chemistry teacher to work on his videos.

Where Does Ryan Toy Review Go to School?

Unfortunately, it’s not known where Ryan goes to school at this time.

Does Ryan Toy Review Have Any Siblings?

Yes, he does. One of three children, he has two twin sisters named Kate and Emma.

What is Ryan Toy Review Famous For?

Ryan is best known for reviewing various toys on his family-run YouTube channel, which has since amassed more than 15 million subscribers.

We do not have any information on Ryan’s Toy Review whereabouts at this time.

How Much Money Did Ryan Toy Review Make Last Year?

According to Forbes, Ryan’s Toy Review made $11 million pretax from his YouTube channel in 2017.

As mentioned earlier, the child star recently launched his own line of toys to Walmart. Designed for ages 3 and up, the collection includes stuffed animals, slime, and more.

In addition to being sold in-stores, the items also became available on the Walmart website on August 6, 2018. According to reports, the line will expand to other retailers in the near future.

Haven’t subscribed to his YouTube channel? If so, you can do so by clicking here. Alternatively, you can also keep up with the family by following them on Facebook or Instagram.