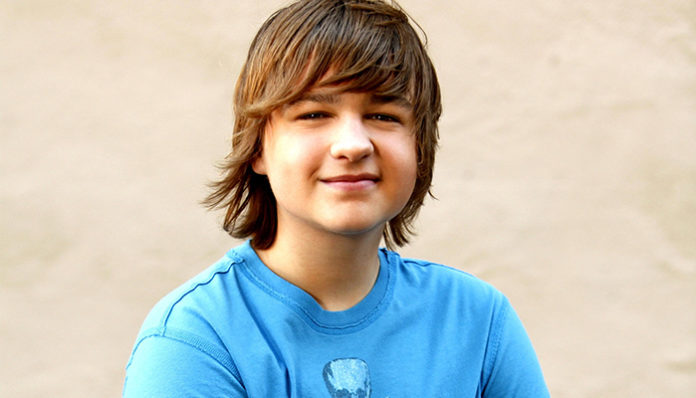 American actor, Angus T. Jones is best remembered for his portrayal of Jake Harper in the long-running sitcom, Two and a Half Men. Hailing from Austin, Texas, he kicked off his career at the tender age of four, appearing in a number of television commercials. When he was six years old, he landed his first acting role in the crime film, Simpatico (1999). Continuing to act in front of the cameras despite his young age, Jones went on to play a series of minor roles in the TV series, Dinner with Friends (2001), and ER (2001). With his hard work, he eventually landed his first lead role in the action movie, See Spot Run later that same year. Some of his other early works include The Rookie (2002), Bringing Down the House (2002) , and Audrey’s Rain (2003). Not long afterwards, his career made a significant breakthrough- he was cast in the new CBS sitcom, Two and a Half Men alongside Charlie Sheen, Jon Cryer, and Marin Hinkle. Ultimately, it was this show that rocketed him towards superstardom.

Playing as Jake Harper, the young actor quickly established himself as an exceptional member of the cast. Winning the hearts of audiences with his brilliant performance in the show, Jones’ popularity quickly rose over the next few years. Having been on the series for over ten years, it has easily become the most noteworthy credit of his filmography. At just eleven years old, his acting had earned him a Young Artist Award for Best Performance in a TV Series by a Young Actor Age Ten or Younger. Since then, his collection of accolades from Two and a Half Men have only grown to include a TV Land Award and an additional Young Artist win (among two nominations). While he starred in the sitcom, he also took time out to appear in CSI: Crime Scene Investigation (2008), Hannah Montana (2010), and Tuna (2013).

After eleven years on the show, Jones announced his departure from the sitcom in the spring of 2014. While he hasn’t taken on any major roles since, he did appear a couple of times in the TV series, Horace and Pete (2016), and Nicky, Ricky, Dicky, & Dawn (2017). As far as other television appearances go, the Texas-born actor has also been featured in a number of programmings such as The Late Late Show with Craig Kilborn (2004), Live! with Kelly and Michael (2004), Big Brother (2005), WWE Monday Night RAW (2015), and CBS Cares (2008), to name a few. As of 2017, Jones- who is only twenty three years old, has appeared in well over a dozen TV shows and films.

What has the former child star been busy with now that he’s left Two and a Half Men? Is he giving himself a short break after being on television for so long? What does he have planned for this year? Has he taken on any new projects or endeavours? What Happened to Angus T. Jones? Where is he now in 2018? 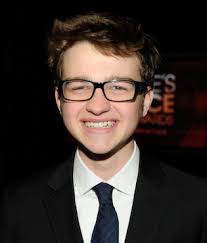 Born on October 8, 1993 in Austin, Texas, Angus Turner Jones is the son of Kelly Charles Jones and Carey Lynn Claypool; he has a younger brother named Otto. When he was just four years old, he and his family moved to California, where he eventually got involved in acting, at his mother’s urging. While still in kindergarten, Jones began auditioning for various commercial gigs. According to a recent interview with the former child star, acting was never something that he had dreamt of doing growing up- in fact, he had no idea what he wanted to do (which is understandable for someone of his age at the time) somehow, it had just happened. With a little bit of luck, Jones eventually scored a few of the commercials that he had auditioned; thus, he went on to appear on nationwide television.

As one thing led to the next, Jones eventually found himself playing as a five-year-old child in the 1991 drama film, Simpatico; it marked his first appearance on the big screen. Not long afterwards, the young actor landed his first major role in the comedy movie, See Spot Run (2001). Gradually branching out to appear on television, he appeared as a supporting character in the TV film, Dinner with Friends (2001) later that same year. From there, he made a cameo in the popular medical drama, ER (2001), before appearing in a couple of films- The Rookie in 2002 and Bringing Down the House and George of the Jungle 2 in 2003.

On March 2, 2001, Jones appeared as one of the main cast members in the comedy film, See Spot Run. Directed by John Whitesell, it revolved around a mailman who unknowingly takes in a FBI-trained dog after mistaking him for a stray. In the film, the actor played the character of James- the young son of his neighbour, who he has volunteered to take care of. Upon meeting the canine, James names him Spot and quickly bonds with the animal, playing with him like a normal dog. Applauded for his performance in the movie, it earned Jones his first accolade- a Young Artist nomination in 2002.

In addition to Jones, See Spot Run also starred Michael Clarke Duncan, David Arquette, Paul Sorvino, and Leslie Bibb, all of whom shared scenes with the young actor. Distributed by Warner Bros. Pictures, the motion picture was released in theatres on March 2, 2001. Upon reaching theatre screens, the comedy reached number three at the box office, having pulled in $9.7 million during its opening weekend. Eventually going on to become a commercial success, its total domestic gross by the end of its run was $43 million- well over double that of its $16 million budget.

The following spring, Jones returned to the big screen in John Lee Hancock’s sports film, The Rookie (2002). Written by Mike Rich, it centred around a baseball coach who achieves his dream of making it to the major league, after his high school team wins the playoffs. One of the supporting characters, the young actor played as Hunter Morris- the son of the movie’s protagonist, Jim Morris (played by Dennis Quaid). Additionally, the cast included Brian Cox, Chad Lindberg, Rick Gonzalez, and Royce D. Applegate, among others.

Released in theatres on March 29, 2002, The Rookie soon became the second commercial hit to make it onto Jones’ filmography. Met with praise, it ended up grossing over $16 million during its opening weekend in the US; by the time it had closed, it had a domestic gross of $75.5 million. For his portrayal, the Texas-based actor was nominated for a Young Artist Award in 2003.

Angus T. Jones’ Big Breakthrough in Two and a Half Men 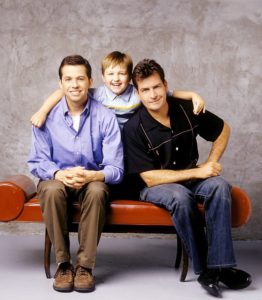 At the age of ten, Jones received a massive break after being cast in the CBS sitcom, Two and a Half Men. Created by Lee Aronsohn and Chuck Lorre, it revolved around the lives of three men- a hedonistic writer named Charlie Harper, his tense brother and his son. Playing the role of Harper’s slacker son, Jake, he acted as the “half man” referred to in the show’s title. Eventually an adult in the later seasons, he enlists in the US Army to work as a chef.

Responsible for propelling him into fame, Two and a Half Men premiered on September 22, 2003. Widely popular in the United States, it consistently drew over 10 million viewers during its twelve-year-long run. Some of Jones’ co-stars on the show included Charlie Sheen, Jon Cryer, Marin Hinkle, Melanie Lynskey, and Holland Taylor.

Easily his most well remembered role on television, his portrayal of Jake earned him a handful of accolades including a TV Land Award, and two Young Artist Awards (among three nominations). At the peak of his popularity in 2010, Jones became the highest paid child actor, with a guaranteed salary of $7.8 million over the next two years; he was allegedly paid upwards of $300,000 per episode.

Despite the success that Two and a Half Men had garnered him however, he eventually announced in 2014 that he would be departing from the show. At the time, Jones had recently converted to the Christian faith; he later found that the show contradicted his beliefs and values. Not wanting to be a part of it anymore, his character was written out of the series by the end of season ten (in it, he had moved to Japan).

While he was mostly busy filming for the sitcom during the 2000’s, Jones also took time to appear in a number of side projects. For instance in 2003, the actor also made a couple of appearances in the TV film, Audrey’s Rain, and George of the Jungle 2 (2003).

In 2005, Jones worked alongside director Karen Arthur in the made for television film, The Christmas Blessing. The second part of a trilogy, it enters around a young doctor who finds himself facing with encounters from the past after returning home for the holidays. Released on CBS on December 18, 2005- right on time for the Christmas season, its reception was mostly positive.

The following year, he lent his voice to the video short, Doary of a Spider (2006). From there, he went on to make a guest appearance in the popular crime series, CSI: Crime Scene Investigation (2008). Finally in 2010, he appeared as a one-off character in the hit teen comedy, Hannah Montana.

Throughout the years, the Texas-born actor has worked with many non-profit organizations for a number of causes. For instance in the summer of 2008, he supported the First Star Organization alongside Val Kilmer, Cuba Gooding Jr. and Dakota Fanning, to help raise funds for neglected and abused children.

That fall, he was also a special guest at the Variety’s Power of Youth Benefit Show alongside Shailene Woodley, Selena Gomez, Miranda Cosgrove, Ray Liotta, and Meaghan Martin.

In addition to the above, the actor was a known advocate of Be a Star.

Angus T. Jones hasn’t appeared on television for a while. His last acting role was in the TV mini-series, Horace and Pete, which came out in 2016. What has he been up to since then?

According to an interview, he had planned on creating “bible-based stories”, ones that would let him share the word of God. Unfortunately, it never worked out. At the same time, he attended the University of Colorado Boulder, where he studied environmentalism. Prior to receiving his degree, however, he changed his major to Jewish studies.

In 2016, he also became the president of a multimedia company started by Justin Combs and Kent Orjioke. As far as we can tell, however, that project also failed.

As of 2022, Jones is 28 years old. While he’s still young enough to make something of his life, he looks nothing like the star that he once was when he played Jake Harper in the sitcom Two and a Half Men. Last year, he was seen in the LA area sporting a busy, scraggly beard and long hair.

Fortunately for him, he still has an incredible amount of money to fall back on from his days in the sitcom. The last that we’d checked, his net worth was around $20 million so he’s probably out there living a comfortable lifestyle. According to various sources, he’s also been spending a lot of time with his younger brother, Otto, which isn’t surprising, given how close they’ve always been.

And for those who are wondering, he is on social media, though his accounts aren’t ‘traditional’ by any means. Take his Instagram, for example, he’s known for posting ‘photos’ that span a number of posts. His last post was that of a cicada and prior to that, he had uploaded images of a red pickup. For those who’d like to see for themselves, you can check out his account at @ang_tj_. As of writing this post, he has over 20.4K followers.