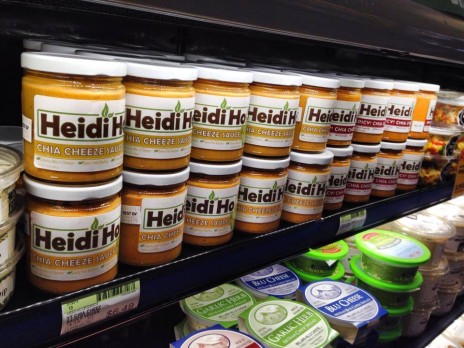 Chef Heidi from Portland, Oregon, is the founder of Heidi Ho. She has come to the Shark Tank to seek an investment of $125,000 in exchange for 25% equity in her company. Today, she has come to showcase that her business Heidi Ho is the future of cheese – everyone loves cheese, right? The truth is, cheese has a problem – it’s loaded with saturated fat and cholesterol, and can be super high in sodium. However, the average American eats more than 33 pounds of cheese per year, which is 11 pounds of fat in the cheese alone! But what if it were possible to eat all the cheese you could desire without any of the health problems?

Thus, Heidi created Heidi Ho. Heidi Ho removes a lot of the problems with eating cheese by using plant-based cheeses, entirely from organic nuts, seeds, vegetables, and containing herbs and spices. There is absolutely no dairy in the Heidi Ho cheese, in fact, and she then passes out samples of Heidi Ho products to each of the Sharks. All of the Sharks are impressed with the cheese, and Robert asks what he is eating; Heidi replies that Robert is eating the “Cheetah Cheese,” which is a mixture of cheese seeds pasteurized mixed with herbs and spices. Heidi Ho is available in four regions of Whole Foods markets, and started out in the Pacific Northwest. 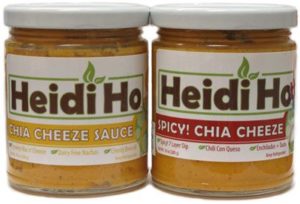 Heidi lived in northern California up until 9 months ago, she says, but she secured a deal to bring the Heidi Ho products to 5 more Whole Foods stores but she requires more working capital in order to create inventory and maintain that growth; projections are showing that Heidi Ho could be in 400 stores within 18 months of growth. Kevin then steps in, with his expertise of all things classy, and explains that the reason why cheese are so popular is that they pair well with a variety of wines. Cambodian wine, for example, is often taken with a “coos” cheese because the cheese is very high in fatty content. However, the cheese he has just tasted from Heidi Ho does not particularly emulate cheese, he claims.

Kevin then asks about sales in the lifetime of Heidi Ho, which Heidi reveals to be around $245,000, but in the past 12 months she has gained $140,000 in sales, which means that sales are on the up. Robert then reveals that he loves the product and everything is amazing, right down to the texture, but he has a question, why hasn’t Heidi Ho products “blown up?” Heidi says that she thinks that Heidi Ho is just on the verge of blowing up, but she wanted to come to the Shark Tank because it’s her first time growing a business by herself and she wants to do things right, and she needs some guidance and monetary support.

Barbara then asks how Heidi Ho came about. Heidi starts by saying that she grew up on a very traditional American diet, and by the time she graduated high school, she was nearly 300 pounds, and to her credit, a picture pops up on the display behind her. She knew that something was wrong with her diet, and the bullying and judgement she faced growing up were unfair and were possibly the reason why she had gained so much weight – gaining weight beyond the additional weight she had growing up. So, she started to learn to cook better and live a healthier life and those pounds eventually started to come off on their own, then to completely changing her life. 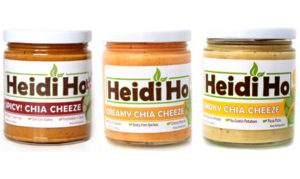 Robert then asks if only vegan and vegetarian people will be the ones interested in the product, but Heidi thinks there is huge potential for crossover. Kevin asks why Heidi thinks that, and then claims that he is a connoisseur in cheese, much like many other people. However, Mark says that while he once loved cheese, he had to give it up just because of the cholesterol – Mark admits that he liked cheese too much, so much to the point of needing to quit. To agree with Mark, Lori shows the samples that she were given and explains that she has cleared her entire place and has been snacking on Kevin’s tray, Robert is still snacking, Mark is still eating it – evidently, all of the Sharks loved it.

So, Lori will be the first to extend Heidi an offer since she loves the product and the proof is right there in front of her. Lori offers the full $125,000 that Heidi is asking for, but in exchange for 30% equity. The only thing that Lori would want to change is the packaging, and Heidi asks if it would be alright to hear any other offers – of course, all the Sharks claim that this is a mistake.

However, Kevin steps in and says that he could never do the deal because he could lose his status in an elite wine club that pairs with cheese, and is the first Shark to suddenly exit. Lori then says that if Heidi wants to hear other offers, that’s a risk Heidi would have to make – the show cuts away to commercial to leave everyone on a cliffhanger. When the segment returns, Mark and Barbara, and Robert all exit in rapid sequence, leaving Heidi exposed and forcing Heidi to suddenly accept Lori’s offer.

In short order, with very little time on the clock, Heidi has scored a $125,000 investment in exchange for 30% equity in Heidi Ho. She has also gained a partner with QVC expert Lori, and a massive following from her appearance on Shark Tank.

Heidi Ho Now In 2023 – The After Shark Tank Update

The deal with Lori closed and with her help, she was able to get the product into several retailers including Whole Foods and Costco in the Pacific Northwest. For a full list of locations, you can check out their official website here. They even do demo days at Costco from time to time.

The business was so successful that they were eventually given an update segment in episode 626. In the segment, it was revealed that their sales had gone up to $750,000 within four months of their Shark Tank appearance. Lori also appeared in the clip, stating that she admires Heidi’s work ethic and social consciousness.

Not only that, but the company has also started to do private label products as well (they will work with you to create a product, which they will then ship to you). Blue Horizon, a company that invests in vegan-based food businesses, also invested in Heidi Ho.

In 2018, they were also featured in Vegan Round the World: The Series, the world’s first international vegan documentary series. That’s not all, they also participated in a number of events prior to the pandemic including the Northwest Food Show, which took place in Portland, Oregon. Heido herself has also done a number of corporate presentations and LGBTQ+ events.

That same year, they teamed up with New Seasons Market to create vegan versions of various grab-and-go favorites including vegan pizza, mac and cheese, chicken parmesan, and breakfast burritos.

As of 2023, the business is still up and running. There was a brief period where their products were pulled from shelves in stores but they have since returned. From the looks of it, however, they’ve cut down on the number of flavours. Currently, they only offer three flavours of cheese dips: beer cheese, queso, and smoky bourbon. According to their Facebook page, however, they do plan on bringing back some of the other flavours. If anything, they just have to find out which retailers are interested.

For those who’d like to learn more about their vegan cheese dips, you can check out their website. Not only are the ingredients for each product listed on the site, but you can also view the nutritional labels. And if you want, you can book a free 30 minute consult with Heidi—just send them a message via the contact us page.