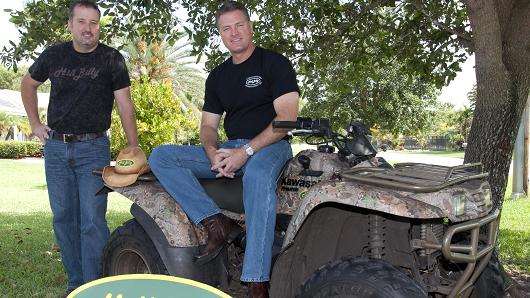 Mike Abbaticchio is a proud redn 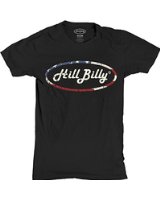 eck American who came up with an idea for a clothing line during one particularly restless night. He wanted to create fashion for men and women who love the outdoors but also want to have a distinct style. It was his vision to create a way for people to proudly display their love and passion for all things country, but it wasn’t until a year after he had this vision that he was able to make his dream become a reality.

Abbaticchio partnered up with Shon Lees and together they brought the Hill Billy Brand to life. The two of them began the business by selling t-shirts out the back of their truck. They sold their merchandise at rodeos, carnivals, concerts, and any other sort of outdoor event. However, what was especially noteworthy was that during the first event they attended, they sold out within the first 4 hours of being there. Abbaticchio and Lees both knew that the Hill Billy Brand had the potential to go places, but they were going to need some help when the new orders started to come in.

Hoping to take their clothing line to the next level, the two men went off in search of a way to get the money the would need in order to grow. It was during their search that they decided to take a gamble and approach the Sharks at ABC’s Shark Tank.

Both boys enter the Shark Tank and quickly lay down their asking price of $50k in exchange for a 25% stake in their clothing company. Then they begin to explain how they experimented with different types of businesses together, but nothing really felt right until they created the Hill Billy Brand. It is a common misconception now that the term “hill billy” is a bad thing. Abbaticchio and Lees are there to prove otherwise. According to them, people who love the country have now embraced the label and are proud to adorn it. That is why their clothing line has been so successful at these events that they have been vending at. What they want to do is to encompass the outdoor living lifestyle. So far they have only been selling shirts, tank tops, and hats, but have received various requests for jeans, bathing suits, and even some outdoor equipment. The possibilities are endless. All they need is the proper marketing and financial support.

After Jeff Foxworthy weighs in on what he thinks the difference between redneck and hill billy is, Robert Herjavec gets down to business by asking what kind of sales they have been seeing so far. The Hill Billy Brand has profited around $271k over the duration of the 3 years they have been up and running. Herjavec gives them a small slap on the wrist for this, stating that it is never a good idea to give the sales of mroe than a year because that leads him to believe that their general sales are not that great. He then asks for the sales they have accumulated over the last 12 months, which is revealed to be about $50k. Then Kevin O’Leary inquires on their distribution, which he finds out to be at outdoor events and they usually go to 1 event a month. So far they have no retail locations, but they did just recently sign a deal with Sports Authority, which will supply their clothing in about 30 stores in the Southeast. In addition to that, they also landed a distribution deal with a company that supplies travel plazas and truck stops.

Next to ask questions is Daymond John, who wants to know on what fronts do they own the rights to the word Hill Billy. Their logo and rights to the word extend to the clothing category as of right now and the own 3 trademarks in the United States and 1 in Canada. What Herjavec really wants to know is how they plan to get their name out there because it costs millions of dollars to get the proper advertising needed to create a nationally known clothing brand. The Hill Billy Boys argue that they have closely aligned themselves with the country music industry and typically whenever they are attending a concert, their shirts sell out more quickly than that of the artist or band that are playing. Generally they can sell around $10k worth of clothing at any large venue concert.

Foxworthy then brings up the issue of the prices they have to pay to be able to sell at these venues. It can 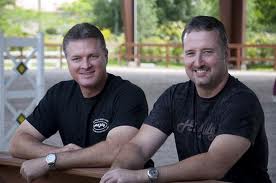 cost anywhere between $100 dollars to $1000 dollars to be able to enter these concerts and rodeos, and in total, they only make around $7k in profit. As a result of this, Abbaticchio and Lees have not been able to pay themselves for their work and instead have needed to invest the money back into the company. With the $50k they are asking for, the money would be used to attend trading shows so that they could get their brand out there and also to expand their trademark into other countries. However, they have thought about licensing deals. So far they have one in Canada with a record company that is going to be packaging their brand along with the different artists that are signed to the label.

The idea of having licensing deals and making money off of their name brand definitely felt like a good idea to O’Leary, but what he doesn’t like is that they are now trying to branch off into the retail marking. It is his belief that the retail clothing market is already way too crowded and he does not want to invest in a company that has too many ideas because that leads to having too many chances to fail. With that being said, he decided to call it quits and give them no deal. Barbara Corcoran finally speaks up to agree with O’Leary, stating that a licensing deal would be the way to go for them. However, she doesn’t have the proper licensing connections that could really help them out, so she too does not make them an offer.

With Corcoran and O’Leary out, that leaves three Sharks left. Herjavec says he will make them a deal to buy their whole company so long as Foxworthy agrees to license it. They would get a 7% royalty on any future licensing deals made, but Abbaticchio and Lees are not willing to give up their company in its entirety. Regardless of their wanting to continue to be a part of the business, Herjavec, Foxworthy, and John all come together to give them an offer of $50k and a 7% in exchange for 100% of the company.

The Hill Billy Boys decide to ask for $100k and want to bump up the royalty to 10%. In addition to that, they would also want to have the opportunity to buy the brand back should the 3 Sharks decide to put the name on the shelf and not use it. The Sharks agree to go up to $75k, but the rest of the deal still applies. After taking a moment to discuss what they want to do, they end up accepting the deal to give away all the rights to their clothing brand.

Despite having struck a deal on the show, they weren’t able to reach a final agreement with the sharks, which caused the deal to fall through. That doesn’t mean they weren’t successful, however. Even without their help, Lees and Abbaticchio were able to take the brand to the next level.

For one thing, they’ve expanded their line of women’s wear to include hats, caps, and patches. Not only that, but they also launched their own line of iced tea, which are all made with pure cane sugar. Currently, there are four flavors available: Sweet Iced Tea, Raspberry Iced Tea, Peach Iced Tea, and Classic Lemonade. For those who are interested, you can get a 12-pack for $19.95 from their official website.

In addition to clothing, they also offer accessories such as koozies, window decals, face masks, and stickers. And shipping is free in the U.S., excluding Alaska and Hawaii.

That’s not all, they also launched their own line of whiskey called the Hill Billy Bourbon. Bottled in South Carolina, they’re aged in new charred oak barrels and are bottled at 86, 90 and 101 proof and are smooth enough to drink straight, stand up to cola or ice, or with a beer back. Recently, they also added a HillBilly Vine Whiskey, that’s blended with all-natural muscadine grapes.

HillBilly Bourbon 86 Proof: An orange amber color with a spicy wood aroma (with a hint of vanilla and corn). Has a sweet and warm finish with flavors of vanilla, rye, and sweet corn. Winner of the Las Vegas Global Spirits Award in 2017.

HillBilly Bourbon 90 Proof: A golden honey color with a rich aroma of oak and honey. Tastes like a traditional Rye whiskey with flavours of vanilla, honey, and spice. Warm and smooth with a balanced feel of rye spices.

HillBilly Bourbon 101 Proof: A rich amber color that has a sweet and smoked oak aroma with notes of vanilla and spices. Has flavors of vanilla, caramel, and smoky oak. Exceptionally smooth with a finish of toasted rye and oak

HillBilly Vine Whiskey: A ruby amber color with a sweet fruit aroma (with a hint of ripe banana and cranberry). Tastes like sweep grape with flavors of subtle cranberry and dried fruit. Extremely smooth with a dry sweet oak finish.

As of 2023, their whiskeys are available at a number of retailers in South Carolina, Georgia, Florida, Pennsylvania, Maryland, D.C., Tennessee, Upstate New York, Colorado, and Arizona. For example, you can get them at Liquor Depot, Lowes Food, Liquor Max, and other liquor stores.