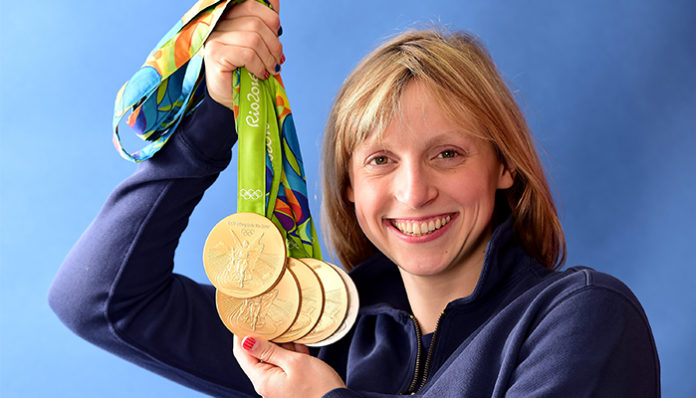 An American competitive swimmer, Katie Ledecky has won numerous events throughout her professional career. Not only is she a five-time gold medalist at the Olympics, but she has also won the World Championships a staggering fourteen times! Today, she holds several world records in the women’s freestyle events.

Highly regarded in the swimming world, she has earned numerous awards over the years including the title of Female Athlete of the Year from the Associated Press. Around that same time, she was also hailed as Sportswoman of the Year by the Women’s Sports Foundation. Most recently, she won five gold medals at the 2017 World Championships.

How successful is the highly accomplished athlete? How much does she take home in terms of prize money? How wealthy is the Olympic champion? From what we can gather, Katie Ledecky’s current net worth hovers around the $3 million mark. How much of this is from endorsements? What else does she have going for her? Stay with us- we’ll be exploring these questions down below.

How did Katie Ledecky Make Her Money & Wealth?

Born on March 17, 1997, in Washington, D.C., Katie Ledecky followed her older brother to the pool when she was six years old. Quickly taking to the water, it didn’t take long for her to grow passionate about the sport. Raised in Bethesda, Maryland, she eventually began training with the Nation’s Capital Swim Club, where she was coached by Yuri Suguiyama.

Eventually, at the age of fifteen, she competed in the United States Olympic Trials. After finishing third in the 400m freestyle event, she was named to the United States Swim Team- with that, she became the youngest American participant at the 2012 Summer Olympics.

At the event, she qualified for the 800m freestyle final after finishing third in the heats. Shortly afterward, she amazed everyone by taking the gold medal with a time of 8:14.63. Later that year, her efforts were recognized with the Breakout Performer of the Year and Best Female Performance of the Year at the Golden Goggle Awards.

Four years later, she represented the United States again at the 2016 Summer Olympics in Rio de Janeiro. After helping the team to win silver, she earned her first gold medal- with a new world record nonetheless, in the 400m freestyle event. In the end, Ledecky won three additional golds in the 200m freestyle, 800m freestyle, and 4x 200m freestyle relay.

Following the event, it’s said that she was offered $5 million in endorsement deals. Instead of taking the sponsorship opportunities, however, she chose to head to college. With that said, she was chosen to be a sponsor of the USS Enterprise in December 2016, alongside Simone Biles.

As far as television appearances go, the swimmer has also been featured on the small screen a number of times over the past few years. For instance, she has appeared in the talk shows Access Hollywood, Mike and Mike in the Morning, The Ellen Degeneres Show, and Today.

The last that he’d heard, the swimmer was in a relationship with a man by the initials T.P.

Does Katie Ledecky Have Any Children?

No, Katie Ledecky does not have any children.

Did Katie Ledecky Go to College?

In 2012, she began studying at Stanford University through an athletic scholarship.

What is Katie Ledecky Famous For?

As a competitive swimmer, Katie Ledecky is perhaps best known for having won five combined gold medals at the 2012 and 2016 Summer Olympic Games.

A world-record holder in the women’s freestyle events, she has also won the World Championships a record-breaking fourteen times.

What Kind of Vehicle Does Katie Ledecky Drive?

Information on Katie Ledecky’s vehicle is unavailable at this time.

How Much Money Did Katie Ledecky Make Last Year?

Over the past year, Ledecky has continued to partake in several competitions including the Pac-12 Championships, U.S. Open, World Aquatics Championships, and U.S. Nationals. In 2017, she also received the Athlete of the Year award from the Women’s Sports Foundation.

Want to support the Olympic swimmer online? If so, why not follow Katie Ledecky on social media? You can find her on a few outlets including Twitter at @Katieledecky and Instagram at @Kledecky. If you’re on Facebook, she also has an official fan page which you can check out here.