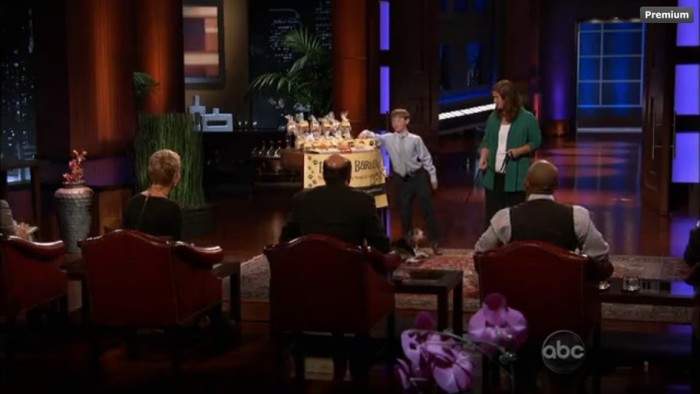 Ryan Kelly is a kid who was only ten years old when he came up with Ryan’s Barkery, which are all-natural dog treats and biscuits. He came up with the idea when he and his parents adopted a two-month-old beagle, called Barkley. When they were on their way home, Ryan’s parents decided to purchase regular dog treats at a pet store, but once they opened the packaging, the smell really put them off, and even Barkley didn’t want to eat the treats. 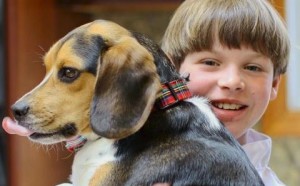 Ryan decided to test out and try different combinations of flavors, and made custom dog treats for Barkley. After he created his first homemade dog treats, his dog was really excited about them and ate them up right away. In order to make some money out of his new idea, Ryan Kelly decided to share some of his homemade dog treats with other dogs in the neighborhood, and they loved it as well. This was the start of Ryan’s Barkery, but he needs an investment from the Sharks, in order to grow his business, and reach more dog owners in America and around the world.

“Ryan Kelly, his mother, Daniella Kelly and his dog, Barkley walk confidently and stand in front of the Sharks, ready to start their presentation”

Ryan Kelly starts the presentation by introducing himself and telling the Sharks that he is eleven years old. He continues by introducing Barkley, and stating that he is the inspiration behind his company, which is called Ryan’s Barkery. Daniella Kelly states that they are looking for an investment of twenty five thousand dollars, in exchange for a twenty five percent stake of Ryan’s Barkery.

“Most of the Sharks have a smile on the face”

Ryan Kelly continues the presentation by saying that Ryan’s Barkery bakes and sells fresh all-natural dog treats. So fresh even, that they should be slapped. Ryan Kelly continues by stating that if your family is anything like my family, than you would consider your pet to be part of the family as well, just like Barkley. Ryan tells the Sharks that after they adopted Barkley, he and his family went shopping for dog treats and they smelled horrible, and couldn’t possible taste fresh and be wholesome.

“The Sharks are carefully listening to Ryan’s presentation”

Daniella Kelly states that she and her son share a passion for baking, and they consulted with veterinarians to find out which ingredients were good for dogs, after which they started experimenting in the kitchen. Ryan Kelly states that they did not stop experimenting, until they found flavors that Barkley could just not get enough of.

He says that they made a lot of different dog treats with different flavors, including Pumpkin Apple, Banana Oat and Low fat Cheddar flavored treats. All of the Ryan’s Barkery treats are baked fresh with simple ingredients and no preservatives.

Ryan continues by telling the Sharks that he brought some of his dog treats over to his friends and gave them to their dogs, and they absolutely loved it.

“Ryan Kelly gives one of his own dog treats to Barkley, to show the Sharks how much he reacts when he smells and tastes them”

Daniella Kelly states that they have been getting a lot of calls from pet owners, asking them where they could buy the custom dog treats, which is how Ryan’s Barkery was born. She continues by stating that, if the Sharks would invest in Ryan’s Barkery, they could develop a website, and start fulfilling orders in a commercial kitchen. Ryan Kelly states that they need the help of the Sharks, because he cannot run Ryan’s Barkery alone, and keep up with all of his homework.

“All of the Sharks start laughing out loud”

Daniella Kelly thanks the Sharks for their time, and tells them that they can see, smell and even taste the custom dog treats, because they are human grade.

Ryan Kelly answers the question by saying that they are making the dog treats in their kitchen, at their own home.

“Barbara Corcoran asks Ryan Kelly when he does it, after his homework, or late at night”

Ryan Kelly answers the question by saying that he makes the dog treats early in the morning, before he goes to school. He states that he wakes up at five in the morning, because he is very passionate and that he likes making dog treats for his own dog and to sell them.

Ryan Kelly answers the question by saying that he has an older brother who helps him out. He says that his name is Nick, but he doesn’t get up at five o’clock in the morning, but rather goes out to sell Ryan’s Barkery products on events.

Ryan Kelly answers the question by saying that he has sold about two hundred bags of custom dog treats, and that he sells them for four dollars a bag, with eight treats in each.

Ryan Kelly answers the question by saying that it costs thirty six cents for him to make one of the bags.

Ryan Kelly answers the question by saying that they tried to sell their products at local supermarkets, but it didn’t work out so well because of the fact that they quickly found out that it is better to take out the middleman, and directly sell to the dog owners.

Ryan Kelly answers the question by saying that they give out little samples at his lacrosse practice, because there are a lot of dogs there. He states that a lot of people bought them there, and they keep coming back for more, because their dogs loved the dog treats.

“Kevin O’Leary asks Ryan Kelly if people ever bought the products, without Ryan personally being at lacrosse practice”

Ryan Kelly answers the question by saying that the labels on his dog treats have their phone number, so people call them constantly to purchase more dog treats.

“Barbara Corcoran asks Ryan Kelly how much of his own money he put into his business, and where he got that money from”

Ryan Kelly answers the question by saying that his best investor is his mother, who invested two hundred dollars into Ryan’s Barkery. Ryan Kelly continues by stating that they have been making a profit, but he didn’t pay his mother back yet, because they keep baking more dog treats, and he will pay her back over time.

Ryan Kelly answers the question by saying that he sees his business growing in such a way, that stores will sell his products nationwide. He also states that they want to start a website, so people could place orders, and Ryan and his mom could fulfill them.

Mark Cuban states that he started his first business when he was twelve years old, and the reason why he started his business was because he wanted a new pair of basketball shoes. He says that he went door to door, selling garbage bags, and that his garbage bag route is not all that different from Ryan’s dog treats. Mark Cuban continues by stating that twenty five thousand dollars is a lot of money, and with all that money comes a lot of responsibility, which would be very difficult for Ryan Kelly to put to work, because he is still in school. Mark Cuban says that he is very excited for Ryan and very proud of him as well, but he is out.

Daymond John states that where he grew up, people wanted to be rappers and gangsters, and when he told his friends that he wanted to be a fashion designer, they laughed at him.

Ryan Kelly answers the question by saying that he thinks his friends are jealous of him, especially because he is on Shark Tank right now.

Kevin O’Leary states that not many eleven year olds can get on Shark Tank, and that Ryan’s Barkery is not a business yet, but rather a hobby. He says that there is nothing wrong with that, because hobbies can make you money as well, but if Ryan Kelly want to make a business out of Ryan’s Barkery, he has a long road ahead. Kevin O’Leary wishes Ryan Kelly good luck and states that he is out as well.

Barbara Corcoran states that she would like to make a full price offer, and offers twenty five thousand dollars for a twenty five percent stake. She states that Ryan’s Barkery can potentially become a very big business, in a very short period of time.

“Ryan Kelly accepts Barbara Corcoran’s offer, and says that they have a deal”

At the end interview, Ryan Kelly says that he cannot wait to see his products in every pet store across America, and that he is very happy to work together with Barbara Corcoran.

The deal with Barbara was finalized soon after the episode aired and thanks to the Shark Tank Effect, sales exploded. Within a few days, their sales had gone up from $800 to the six-figure range. In fact, they had received so many emails and orders that Daniela’s phone had shut down. They eventually set it so that the computer would make a sound every time they received an order. However, it quickly became overwhelming and they had to shut it off.

With Barbara’s help, they were able to take the company to the next level. They opened more than 30 stores across the US and continued to expand. They also filmed an update segment, which was included in the 21st episode of the fifth season, where they announced that they had changed their name from Ryan’s Barkery to Ryan’s Ruffery.

They also revealed that they’d done more than $10,000 in sales per month since being on the show. Ryan also had the opportunity to participate in Independent Youth, an entrepreneurs program that’s affiliated with Kingonomics.

They also landed a deal with Petsmart, who agreed to sell their dog treats in over 400 stores nationwide. While they initially ran into trouble producing enough product, they eventually figured it out. Rather than making the treats in their kitchen, they began working with a co-packer, which allowed them to produce more products.

The only negative was that Daniela was overworked. To make matters worse, her health had not always been the best; she had suffered a stroke prior to being on Shark Tank, which affected her memory and dexterity. In fact, it had almost prevented her from being on the show altogether. Fortunately, she had recovered enough to make it to the tank. Still, Daniela’s deteriorating health concerned Barbara. At one point, she considered hiring someone else to run the business so that she can take the weight off of Daniela’s shoulders but ultimately chose not to do so.

Fast forward to 2018 and the treats were sold exclusively online; they were no longer available at Petsmart, Wegman’s, and other retailers. Unfortunately, Daniela also passed away that year, which caused the business to fizzle out. She was 48 years old.

As of 2023, Ryan’s Ruffery is no longer in business. Their website has been shut down and their products are no longer available for purchase.

What is Ryan up to now? Seeing as how he was eleven back in 2013, he would be 20 years old now—probably a college student. Will he be starting another business after graduating? Only time will tell.