What Happened to Mel C – 2023 Update on Sporty Spice 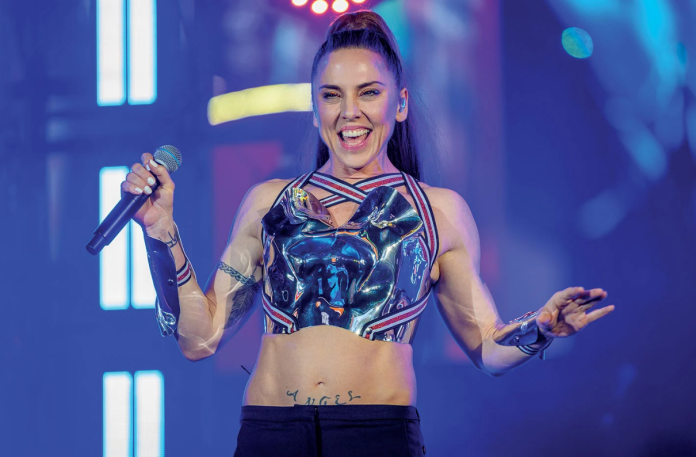 Mel C rose to prominence as “Sporty Spice” of the Spice Girls during the 1990s. She eventually launched a solo music career after the group went on hiatus. Where is she now?

Mel C was born on January 12, 1974, in the small town of Whiston. The daughter of Alan Chisholm and Joan O’Neil, she grew up in the town of Widnes. When she was still a young child, her parents separated. Her mother later remarried; one of her step-siblings includes Paul O’Neill, the auto racing driver.

After graduating from Junior School, she went to a co-educational secondary school in a nearby town. From there, she studied singing, musical theatre, dancing, and drama at a local college in London.

While she was there, she responded to an ad in a magazine- one that was seeking female performers for an all-girls group. Auditions took place in Balderton Street, London, and Mel C was ultimately chosen to be a member, along with Geri Halliwell, Mel B, Victoria Beckham, and Emma Bunton.

After touring various record companies in LA and London, the girls signed a recording contract with Virgin. Their first-ever studio album, Spice, came out in the fall of 1996 and was a worldwide hit. It entered the UK Albums Chart at number one and also topped the charts in over 15 different countries. In total, four singles were released from the album – “Say You’ll Be There”, “Wannabe”, “2 Become 1”, and “Mama”.

Performing With the Spice Girls as Sporty Spice

Mel C and the girls came out with their second studio album, Spiceworld, in November 1997. As with their previous release, it included pop music with dance-pop songs. Not only did it receive positive reviews from critics, but it also performed well commercially. More than 1.4 million copies were shipped within the first week in the United Kingdom, where it debuted at number one. It also reached number one in several other countries including the Netherlands, Norway, Finland, Ireland, Denmark, and Australia.

The lead single, “Spice Up Your Life” was released in 1997. Similar to “Wannabe”, it peaked at number one and became an instant hit. Other tracks from the album include “Never Give Up on the Good Times”, “Viva Forever”, “Move Over”, “Stop”, “Too Much”, and “Denying.”

To support the album, Mel C and the rest of the group also went on their first tour, the Spiceworld Tour, which covered North America and Europe for 97 dates. It kicked off on February 24, 1998, in Dublin, Ireland, and continued until November 24, 1998, with the final performance taking place in Wembley Arena. Halliwell had left the group midway but the girls continued the rest of the dates without her.

The group continued to write and record new material while on tour. They eventually released a song titled, “Goodbye” in late 1998. A tribute to Halliwell, it reached number one on the Singles Chart and received positive reviews from music critics, who praised it as one of their best singles.

Internationally, the single reached number one in New Zealand, Ireland, and Canada. It also peaked within the top five in Finland, Taiwan, Denmark, Australia, and Sweden.

By 1999, the girls had begun to pursue solo music careers, including Mel C. Signing with Virgin Records, she released her first solo project, Northern Star, on October 18, 1999. Recorded with the help of several producers, it combined pop music with elements of trance, dance, rock, R&B, techno-rock, and electronica.

Upon release, the album debuted at number 10 in the United Kingdom. Sales eventually went up with the release of her new song, “Never Be the Same Again.” It later reached number four on the UK Albums Chart; it also reached the top ten in Ireland, Hungary, Finland, Germany, Norway, and a few other countries.

Some highlights from the album include “Never Be the Same Again”, “If That Were Me, “Go!”, “I Turn to You”, and “Suddenly Monday”, all of which were co-written by Mel C.

To support the album, she also embarked on a concert tour. The Northern Star Tour, as it was called, consisted of 76 dates and saw her performing in 30 different countries across four continents.

Not long afterward, she began to work on her second album. The first single, “Here It Comes Again”, was eventually released on February 24, 2003. A month later, she released her another solo album titled, Reason, which consisted of 12 tracks including “Positively Somewhere”, “Lose Myself In You”, “Yeh Yeh Yeh”, “Let’s Love”, “On the Horizon”, and “Reason.” While it didn’t perform as well as her debut project, it was certified Gold in the UK, with more than 101,000 copies sold.

To promote the project, she embarked on another tour in the spring of 2003. Unlike the Northern Star Tour, however, it only included dates in Europe.

In January 2004, she left Virgin Records and launched her own recording label, Red Girl Records. That same year, she embarked on a mini-concert tour and finished recording her third solo album. Beautiful Intentions, as it was called, was later released on April 11, 2005. A commercial success, it charted in the top 20 in Scotland, Austria, Portugal, Switzerland, and Germany and reached number 24 in the United Kingdom.

The album spawned three singles, “First Day of My Life”, “Better Alone”, and “Next Best Superstar”, two of which went on to become the most downloaded song in Germany. Like before, she also promoted the album with a tour, which began on April 16, 2004, in Birmingham, London.

A year later, she dropped her subsequent album titled, This Time. Written and recorded throughout 2006 and 2007, it included 13 tracks, many of which were co-written by Mel C herself, and featured the singles, “This Time”, “The Moment You Believe”, “Understand”, “I Want Candy”, and “Carolyna.” However, it garnered mixed reception from critics and failed to chart within the top 20 in the UK.

That same year, it was announced that the Spice Girls would be coming back for a concert tour- one that would include shows around the world; it would also be their first time performing together since 1999. The tour ultimately kicked off on December 2, 2007, in Vancouver and continued for 47 dates, before ending at the Air Canada Centre in Toronto. Mel C and the rest of the girls were reportedly paid £1 million (approximately $1.2 million USD) for their performances.

A few years after their reunion, Mel C released her fifth studio album, The Sea, which was preceded by the single, “Rock Me”. Recorded in London, it consisted of 11 tracks including “Think About It”, “One By One”, “Get Out of Here”, Stupid Game”, Beautiful Mind”, and Burn.” In the United Kingdom, it peaked at number 6 on the Independent Albums chart and at number 45 on the UK Albums Chart; it also charted in Austria, Switzerland, Scotland, and Germany.

And in 2012, she released a cover album titled, Stages, which included song covers from various films and musical theatre shows. To promote its release, Mel C held several album signing sessions in HMV. She also performed one of the songs, “I Don’t Know How to Live Him”, on The Late Late Show, QVC, This Morning, and Superstar.

Several years later in 2016, she released her seventh studio album, Version of Me. Praised by critics, it included 11 songs, all of which featured elements of electronica and R&B. In the United Kingdom, it peaked at number 2 on the Indie Albums chart and at number 25 on the UK Albums chart. It also charted in Germany, Spain, Switzerland, Scotland, and Ireland. Her highest-charting album since Beautiful Intentions, it led to the release of four singles, “Anymore”, “Room For Love”, “Dear Life”, and “Hold On”. She also hit the road for a tour to promote the album, which saw her performing in 14 different cities.

In August 2012, Mel C reunited with the rest of the Spice Girls to perform at the Summer Olympics closing ceremony in London. They performed a medley of “Wannabe” and “Spice Up Your Life”, which ended up being the most tweeted moment of the Olympic Games on Twitter.

After a failed reunion project in 2016, the girls got together for a reunion tour in 2019. Their first time performing together since the Olympics, it consisted of 13 dates and began on May 24, 2019 at Croke Park in Dublin, and concluded with three sell-out concerts in London. Due to commitments with her fashion business, however, Beckham opted not to participate. Each of the members were reportedly paid £12 million for their performances.

Aside from singing, she has also dabbed in several projects as an actress. In 2009, she made her debut in the musical production, Blood Brothers, where she played the role of Mrs. Johnstone. For her portrayal, she was nominated for Best Actress in a Musical at the Laurence Olivier Awards.

She later starred in the musical Jesus Christ Superstar from 2012 to 2013.

In 2011, she appeared as a mentor assistant in the third season of The X Factor Australia. She also joined the judging panel for Superstar, Bring the Noise, and Asia’s Got Talent. And in 2014, she made a small appearance in the spoof-documentary series, Brian Pern.

On October 2, 2020, Mel C released her eighth solo album, Melanic C. It entered the UK Albums Chart at number eight and peaked at the top of the UK Independent Albums Chart. Not only that, but it also charted in Australia, Ireland, Scotland, Switzerland, and Germany.

Preceded by four singles, the album, which received generally favorable reviews from critics, consisted of 10 songs including “Fearless (ft. Nadia Rose)”, “End of Everything”, “In and Out of Love”, “Who I Am”, “Blame It On Me”, and “Good Enough”.

Prior to that, she had also sung one of the songs on The Late Late Show with James Corden, where she live-streamed the performance from her house due to the COVID-19 pandemic.

A deluxe version of the album was later released on September 3, 2021. She also recorded a new video for her cover of “Touch Me”.

That same month, it was announced that she would be joining the 30th season of Dancing with the Stars as a contestant. She ultimately finished in eleventh place after being voted out during the fifth episode. She also joined the judging panel of The Voice Kids and made appearances in Celebrity Gogglebox, Entertainment Tonight, and A Very Boy Band Holiday.

More recently, she appeared as a guest judge on RuPaul’s Drag Race: UK Versus the World, where she made hilarious shady comments about her former bandmate, Victoria Beckham. In April 2022, she was also featured in Tobtok’s remix of Train’s “AM Gold.”

She has also written a memoir titled, The Sporty One: My Life as a Spice Girl”, which is scheduled to be released on September 27, 2022. For those who are interested, the book is available for preorder at various retailers.

Want to know what else she’s up to? Then consider following Mel C on social media. She’s active on Instagram (@melaniecmusic) where she has over 892K followers. She also tweets on a regular basis under the same handle @melaniecmusic.