The co-founder of Microsoft and american billionaire Paul Allen has announced the discovery of the battleship more than 70 years it was sunk by the U.S. He said the wreck was found by his exploration team.

It was laying on the floor of the Sibuyan Sea near the Philippines at a depth of around 1km or 3,280 ft. Known as the Musashi, it was one of the biggest battleships built by Japan.

The ship was wrecked by US warplanes on October 24 1944 during the Battle of Leyte Gulf. This is believed to be one of the biggest naval battles in World War Two in which Americans and Australian forces united to defeat the Japanese. 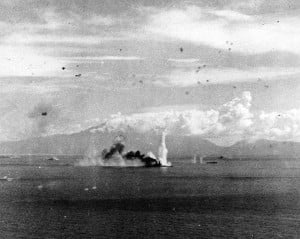 Paul broke the news through his Twitter page which also showed various photos taken by the exploration team. It was no surprise, Allen and his team had been searching for this ship for 8 years. He told CNBC that the reason being was ”because since my youth I have been fascinated with Second World War history”.

The battleship was found using an Autonomous Underwater Vehicle (AUV) after his team carried out a study of the seabed and found evidence.

The US Navy describes it as a ”mighty battleship” with ”mammoth guns”. Measuring around 263m or 862 ft, it remains as one of the biggest battleships made in the world. It also has a twin ship named Yamato, which was damaged in the same battle but survived. It didn’t survive for long, as it was destroyed by American ships a year later after it tried to get to a safe place in Okinawa.

In her last battles, the ship was attacked by US aircrafts.  During its final day it was hit by 20 torpedoes, and 17 bombs. After this heavy attack, it capsized and sank. More than 1,000 men lost their lives in this ship.