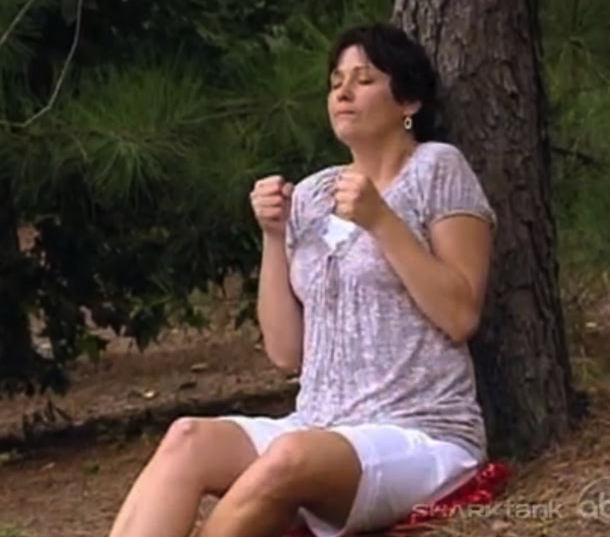 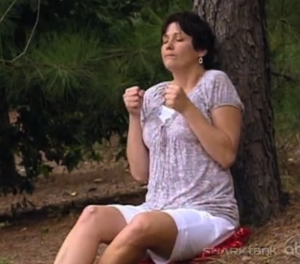 Housewife Lori Lite believes her homegrown business has the potential to make millions. She is from Marieta, Georgia. She and her husband Rick have three children, and they are very proud of them. She says that raising children is really stressful and her son made matters even worse, because she couldn’t put him to bed at night. She got very stressed because of this, and got forced to go into going to stress management classes by her aunt. Here she learned about relaxation techniques. One night when she was putting her son to sleep, she says she used the same techniques on her son. Her husband was standing in the hallway and listened to the whole thing. When Lori came out of the room, her husband hugged her and said; Lori, that was great! You can help thousands of children and parents with this.

This inspired Lori into developing her products and starting a business, but she states that what she does, takes a lot of upfront money. She states that they are always going from dollar to dollar, trying to make ends meet. She says that that they have put everything on the line to make her business work. She has put her house on the market is sharing one car with her husband and she states that she has nowhere else to go. Lori claims that she has an effective product, and says that she needs help to bring it into every household in America. Lori also claims that every parent needs to know about her product, and that only the sharks can help her to do exactly that.

“Lori Lite walks nervously and stands in front of the Sharks”

She starts by introducing herself, telling the sharks that her name is Lori Lite and that the name of her company is called Stress Free Kids. She is asking the sharks to invest two hundred and fifty thousand dollars in her company in exchange for a twenty percent stake. She states that she is a hands-on mom and that she has dealt with real stress and anxiety while she was raising her three children.

Lori continues by telling that her son was hyperactive and that it took her two hours, every night, to be able to put his son to bed. She states that luckily for her, she learned to do stress management techniques that had an immediate effect on her. She wondered what it would be like if she could get her son to do the same techniques. Lori states that she began to create a story that entertained him, but at the same time incorporated an actual stress management technique. To Lori’s amazement, her son followed along and fell asleep.

“Lori Lite reveals her products to the sharks”

Lori says that she has a whole line of books and CDs that will help children to manage stress, while promoting their self-esteem and a more peaceful sleep.

“Robert Herjavec asks Lori if she can give an example, a quick paragraph or something”

“Lori happily accepts and opens up one of her books”

“Kevin O’Leary asks Lori if she wrote everything herself”

Lori states that, not only did she write everything herself, but she also produced and published all of her 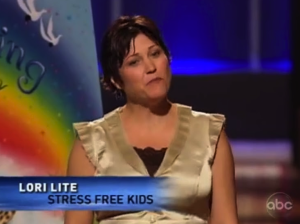 work by herself. Lori takes the book called “Angry Octopus” and shows the sharks the illustrations within the book. She states that the illustrations in the book are an example of a muscle relaxation technique and reads out the following paragraph; “The octopus continued: Tighten the muscles in your chest, your neck and your shoulders. Come on guys, do it! Tighten them as tight as you can! Hold, hold, hold, sigh.”

“All sharks did exactly what Lori said, tightened their muscles and sighed. They seem very happy and positive about Lori’s products.”

“Robert Herjavec says that the text is very good”

Lori states that her husband helps her with sales and marketing, and that she made him quit his job. The sharks are surprised about this and ask if she split the fifty thousand in two. Lori counters this by saying that they have been married for twenty-three years and that they share everything in their lives.

“Barbara Corcoran asks if there is real proof out there that children are feeling this kind of stress, if there is a real market for that”

Lori says that there are studies, which show that thirteen out of a hundred children have anxiety disorders. She claims that there is a real market for her products and all she need is a boost in financials to be able to deliver her products to more homes.

“Kevin O’Leary asks Lori why she hasn’t been to a children’s books publisher, and told them that she has already sold thirty thousand of her books, and asked for a deal”

Lori answers this by stating that her first two books were with a publisher, but after that she decided that she wanted to do her own publishing. She says that she got paid a very small percentage, and she already sold more books by herself.  Lori also claims that the publishers wouldn’t promote work, unless you are a known writer.

Lori says that she has invested two hundred thousand dollars into her own products. Kevin O’Leary states that the only way to make money with children’s books is by getting massive distribution. He also says that there are two giant retailers that control the physical distribution and one online retailer. He states that until Lori gets on all three of those, she won’t be able to make many sales.

Lori continues by saying that Amazon is her biggest distributor and she is also with Borders and Barnes and Noble. She has all the distribution, which confuses the sharks, because they do understand why Lori’s sales are not more than they are right now.

Daymond John compliments Lori, saying that she is a star. He offers her two hundred fifty thousand dollars for a fifty one percent stake of her company. Barbara Corcoran says that she offers the same deal, but only wants a fifty percent stake in Lori’s company. Daymond says he really wants this deal to go through, and that he will make a brand out of Lori’s products and make Lori a star.

Lori counters the offers and states that she does not want to give away more than forty percent of her company, to which Barbara says that she retracts her offer. Lori regrets this decision and tells Barbara that she would gladly accept her offer. She says that it is a crazy deal, but she would like to see how this works out.

At the end, Lori gives an interview, stating that she does not really realize what happened, everything seemed very crazy and the numbers were crazy as well. She seems very happy that she got a deal and is pleased with herself. 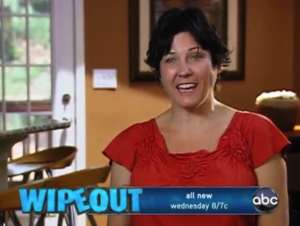 Even though Lori was selling a lot of her products, she was still in a lot of debt and needed a boost in finances to be able to sell larger quantities of her products. She made a fifty thousand dollar profit since she started selling her products, but she had spent about two hundred thousand dollars in her company alone. There is no mention of Lori’s products being the best or worst on Shark Tank. Three of the five sharks were not interested in her products, because they believed that it was too risky.

Stress Free Kids is a hit and Lori seems to be selling a ton of copies online. To get the best price you can click this link to automatically apply the discount to Stress Free Kids at Amazon.com

It is easy to tell that Stress Free Kids has succeeded as a business and with the help of Barbara Corcoran, Lori’s products will be distributed more and reach many more American homes. If Lori would hire translators and translate her books and other products into different languages, she would probably reach many more households, all over the world.

Stress Free Kids has many products for sale, ranging from children’s books to CDs and even whole curriculums. The prices range from $8,95 for digital downloads of Lori’s products and goes up till $105 for a Stress Free Kids Curriculum.