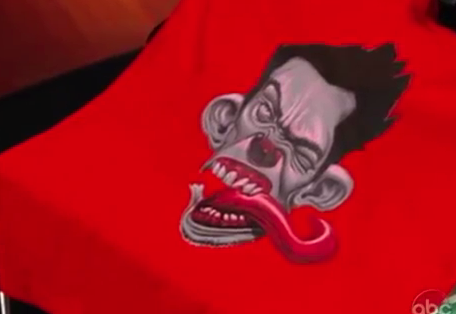 About Crooked Jaw Fashions and its creator, Craig French 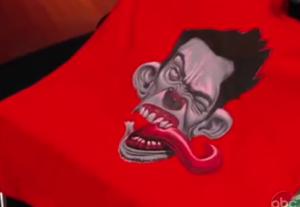 Craig French is the founder of Crooked Jaw Fashions, a mixed martial arts-themed clothing company based out of Long Island, New York. French appeared on the second episode of Shark Tank’s first season. The episode originally aired on August 16, 2009.

French had left his full-time job to devote himself to Crooked Jaw. His business partners are Deniz Tanbasi and Michael Prahalis.

In the pre-pitch video shot in Long Island, French introduces himself and his company to the viewers. He speaks of the origin of the name Crooked Jaw which is based on a broken jaw injury he had while playing lacrosse in college. French is eager to seek the Shark’s knowledge, especially Daymond John. At the time of the video, French is living with his mother in order to keep the business afloat.

French, his business partners, and a model enter the Tank, seeking $200,000 for 20% equity. French’s Crooked Jaw clothing line is targeting young MMA fans. He tells the Sharks he sold 1,500 units. His products are being sold to local surf and ski shops on Long Island and has recently started an online retail store. Kevin Harrington sees the red shirt with the demented clown face and wants to have a close-up look; French shows the shirt to the Sharks. 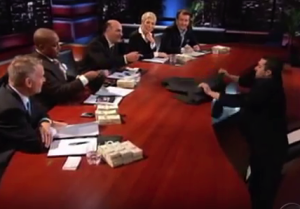 replies a thousand guys. French tells the Sharks he has been to a trade show, but had zero orders while making many contacts. Daymond points out that those results are horrific. French persists in trying to convince Daymond that Crooked Jaw is a viable company. He walks to the Sharks’ table and delivers a cap and T-shirt to Daymond.

Daymond is pointing out that neither he or the company is standing out. However, French believes that receiving the needed money will allow him to reach retailers and greatly expand the brand. French then quotes from the tag included on his products:

“There’s no easy way to achieve what I desire most.”

“Perseverance will allow me to fulfill my dreams.”

“No one can stop me from what I want to accomplish.”

To emphasize his disbelief of a profitable Crooked Jaw, Kevin O’Leary retorts by “quoting” a stack of bills:

Daymond isn’t into Crooked Jaw because French has merely put out product and built little from that. When Robert asks how many sales Crooked Jaw made, French replies that they made a “very insignificant” amount: $5,000. Robert, stating that French is “crashing and burning,” is out. Harrington is also out.

The Sharks are asking Daymond if he, as the clothing guy, will do a deal. Daymond says French is nobody to everybody thus he’s out. Barbara is also out.

Kevin O’Leary likes French’s story, but doesn’t see Crooked Jaw as a money-making business; he and the other Sharks are all out. Kevin wants to buy some of the Crooked Jaw products and asks French how much they cost. French isn’t taking Mr. Wonderful’s money because the merchandise presented at the Tank is a gift to the Sharks.

In the post-pitch interview, French says he’s disappointed and sad, but won’t let the Sharks’ rejection stop him.

Crooked Jaw After the Tank 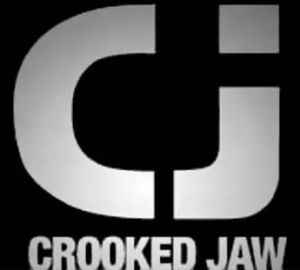 According to SharkTankBlog, French said he landed a deal with a major retail chain after his Shark Tank appearance. However, no further details have surfaced. While the Crooked Jaw home page is currently “under construction,” French maintains a sparsely maintained Facebook page for the Crooked Jaw brand. A February, 2015 post states: “Maybe we will start producing some clothing again one day.” There are no further developments to date.

How can I buy the product or service?

Crooked Jaw products are currently unavailable for purchase. Its website only consists of a plain “Under Construction” page.

There are no known reviews available.

Ultimately, Crooked Jaw Fashions failed as it lacks a functional website and its products cannot be purchased.