The gaming scene is constantly evolving, breaking limitations set by prior classics from 2D side scrollers to the ability to use virtual reality headsets for a much larger level of immersion. With countless of gaming and streaming conventions being held annually, the video game scene is amassing a large following as video games make groundbreaking waves in our society: with the movie All Work All Play documenting the rapid growth of eSports and how there are arguably more people who watch eSports rather than things like the superbowl. Even as you read this Gamescom 2015 is going on right now. Major gaming companies such as Blizzard Entertainment and EA unveiling the latest and greatest in beloved series. With more footage of Star Wars Battlefront 3 and the latest expansion of World of Warcraft revealed, gaming fans are receiving a plethora of great titles and content.

Another large gaming convention that has occurred rather recently was Minecon 2015 in London on July 4-5. The rapid growth of Minecraft has garnered a mass cult following spawning plush toys, Lego sets, t-shirts, and countless YouTube channels devoted to the block building game. Feelings towards Minecraft seems to be that either you cannot stand it or love it. Despite your feelings towards the animated block title, Minecraft has been the reason for countless of block based titles that also attempt to mimic minecrafts success without blatantly copying Minecraft. For game developers who don’t wish to entirely hop on the Minecraft band wagon, the block style of art for games is the answer for you. One of these titles that was inclined to implement the block based art is Cube World.

First announced to be under development in June of 2011, Cube World was received with a high level of excitement and praise. The production of Cube World culminated in an early alpha version of the game 2 years later on July 2, 2013. The alpha was met with happiness and joy, but that is where the praise stops. Despite all of the excitement generated for Cube World, the project seems abandoned, dead in the water leaving many to speculate on the uncertain  future of Cube World.

Let’s go over the basis of what Cube World was meant to be. Designed as an open RPG utilizing the cube art style, Cube World let players explore and quest in a 3D Voxel-based game. Being an RPG the players can

choose from four classes consisting of Warrior, Rogue, Ranger, and Mage with each class offering a different style of play. After choosing a class player can then traverse the immensely large open world filled with various creatures and monsters including dungeon bosses to harmless ncp animals. Not only can you fight the various monsters in the world, you can tame animals like sheep or turtles to fight alongside of you in battle or even animals that can be used as mounts. As much as questing and adventuring is apart of the game crafting also plays a large role in Cube World. With crafting players can create food, potions, weapons, and armor as well as modifying your existing weapons with custom block by block additions to make visually interesting aesthetically nice weapons.

All of this excitement was being developed by just two people. While most games have a team of developers working day in and day out on it, Cube World has been made and developed by Wolfram Von Funck and his wife Sarah Von Funck. A two person dev team that released Cube World as buyable alpha on their website Picroma. Unfortunately Wolfram had to disable their store preventing eager players from buying due to an overload on their servers. Originally thinking that the overload was caused from the large amount of interest and people that wanted to purchase it when in reality the servers were being under multiple distributed denial-of-service attacks. Wolfram claimed, “It seems that someone is trying to systematically damage us and our business… The attackers obviously want to prevent us from selling our game.” And being an incredibly small team the two developers were overwhelmed by the attack, unsuspecting of the numerous attacks.

But that is when the seemingly bright future of Cube World turned dark. Following the release of the alpha Cube World was only updated once. Wolfram claimed that the update was coming along nicely and was even previewed in July 2014, yet this was never released. Cube World then fell dormant. No word from the developers, no updates, nothing. With just a lack of communication and information people have been left to speculate on the uncertain future of this promising RPG title. In addition to the mounting speculation, many people who bought the alpha felt betrayed and angry, which they are rightly so, as they had paid for what they believed was a game title that offered endless fun with annual updates. With original fans claiming Cube World is done, over, dead. 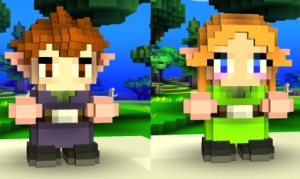 However after a year of silence, the lack of information, and speculation, fans of Cube World were given relieving news as gaming blog Kotaku was able to get ahold of Wolfram and get some answers. First Wolfram stated that the reason he hasn’t done a “we’re still here” post because Cube World is his life passion and he won’t quit. Claiming that he has restarted working on the questing system several times, Wolfram stated that he won’t release Cube World until it is at peak perfection. This, while definitely is a step in the right direction, was also met with lots of speculation as many feel that they can’t trust what Wolfram says due to how long everyone has been in the dark.

Hopefully Wolfram is speaking the truth that Cube World is not dead and will eventually find an update and release date. Cube World was originally seen as a new and exciting open world RPG with an art style that stunned. Now it is perceived as a failed attempt at an indie game that left fans disappointed. Fans of Cube World hope that the game will be revitalized and given a much needed breath of fresh air. With the recent set of news many are hopeful that Cube World will be released as a complete game in due time while alpha owners can hopefully receive a much needed update.

Andy Debolt
Andy is a graduate of the University of Minnesota with a Bachelors Degree in Journalism. When he isn't writing Andy enjoys water sports and spending time on the golf course.
RELATED ARTICLES
Gaming