A new pistol has made its debut, although you won’t be able to purchase this gun until next year, and this new pistol has a built-in silencer with it. The new silencer pistol is called the Maxim 9, which is made by the silencer manufacturer SilencerCo, and they are based out of Utah. SilencerCo is known for making some of the best quality silencers on the market, and they are very popular among gun owners throughout the nation. 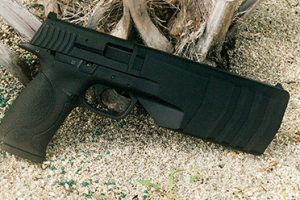 Most silencers are separate parts that are often canister-shaped and screw onto the end of the gun barrel, but this is actually built into the gun itself. The Maxim 9 is a semiautomatic with a 15-round magazine, and the silencer added onto it gives it such a very cool and unique look that it cannot be mistaken for any other type of gun on the market. This is a duty pistol that is reliable, durable, and also quiet, according to CEO of SilencerCo., Joshua Waldron. According to the NRA, the CIA predecessor, the Office of Strategic Services, used to use the British-made pistols that also had the built-in silencer during World War II. Waldron says that the Maxim 9 has a better design than the older models, which were not that accurate or reliable, and they also used special ammo that was considered ridiculous.

The Maxim 9 is said to be more powerful than a .22 caliber silencer-handgun, which are developed by Sturm, Ruger, and this is why it is a lot more effective for personal protection. If you have heard about .22 calibers, then you know the bad rap they get for being unreliable in terms of accuracy, unless you are right up on the target. This is just the time for this type of gun to hit the market because sales of silencers have been booming recently, even as restrictions have increased, along with the prices. The prices for silencers are anywhere from $325 to $2,500, and the number of registered silencers increase by 38 percent in just one year according to the ATF. As of February 2015, there were 792,282 registered silencers in the United States, and this is because silencers are often popular among hunters and those who practice target shooting, but also want to protect their hearing. The Maxim 9 will have to go through the same federal guidelines that apply to the silencers, which are mostly called suppressors. This is because they suppress the sound of the gun shot, even though the shot is still loud, and it does not completely silence the gun the way that a silencer does in the movies. In terms of what is more regulated, suppressors face stiffer regulations than even the guns do, and it can take several months to complete the suppressor as opposed to minutes or at most a couple weeks for a gun depending on the dealer and type of gun.

When you are buying a suppressor, it falls under the National Firearms Act, which also includes automatic machine guns and sawed-off shotguns, you have to go through a rigorous process. First you have to mail or fax in a photo identification to the ATF, and then pay $200 for a tax, and it can take 9 months to be approved. When you get a gun, you are automatically going to go through a background check from the federally licensed dealer, and you just need to provide a photo identification, and submit a form to the FBI electronically. Most people can get all of this done for a gun within 20 minutes, although sometimes more information is required that could hold up the purchase. 41 states have legalized suppressors, and just four years ago that number was at 37, so it’s actually becoming more popular for states to accept silencers. There are only a couple of states that have banned suppressors all together, and it is the ease of state restrictions is partially because more people are becoming aware and interested in purchasing the product. There are a lot of campaigns out there to educate the public on their rights regarding silences, including a “Yes, Silencers are Legal” campaign, and people have been more willing to purchase these products even if they are just using the gun for personal protection.

At this point, it is not known how much this gun is going to cost, although it likely will not be cheap since this is the first gun with a built-in silencer being manufactured within the United States. It is also not known if other gun manufacturers are going to be also looking into making the silencer-handgun combination, but if the sales of this gun wind up being really good, then more manufacturers will probably follow in the coming years.