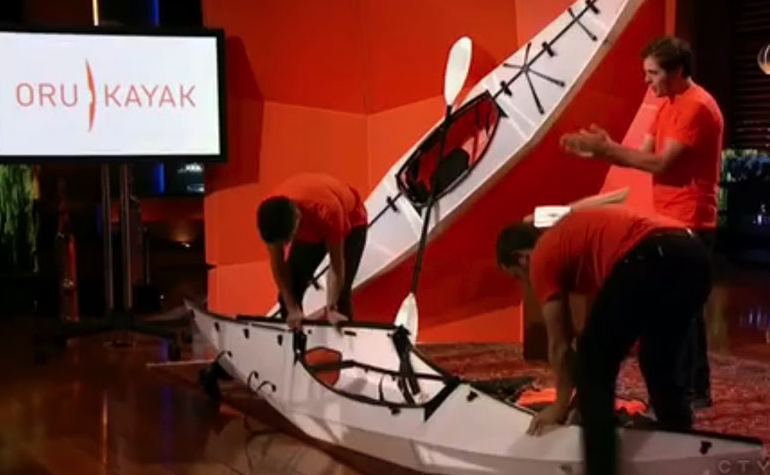 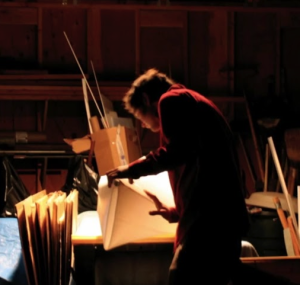 The idea for Oru Kayak started when founder and designer Anton Willis moved into a small apartment in San Francisco. This make him put his fiberglass kayak into storage, because he had no room in his own apartment. This made him think about ways to be able to store his kayak in his apartment, without having to lose any of its functionalities. He started reading into origami, which made him come up with ideas for a folding kayak. Anton Willis spend a lot of time sketching paper models for his foldable kayak idea, and eventually he was able to design and create full-scale prototypes. In fact, he created over twenty five full-scale prototypes, and tested them out in lakes around San Francisco, including the Bay Area.

Anton Willis states that in 2012, he started a Kickstarter campaign, in order to be able to launch Oru Kayak. The campaign had over seven hundred supporters, which led Anton Willis to believe that there is really a demand for his kayaks. He states that after the campaign ended, he set up and assembly facility in California, and has already sold thousands of kayaks all over the world. He states that the team has grown significantly since he started the company, and he is very excited about being part of an incredible movement.

Anton Willis, Roberto Gutierrez and Ardy Sobhani introduce themselves, after which Anton Willis continues by saying that their company’s name is called Oru Kayak, and that they are seeking five hundred thousand dollars for a twelve percent stake. Anton continues by saying that they all love kayaking, but they hate all the hassle of storing and transporting their boats. Anton Willis shows a kayak, which they have brought with them, and tells the Sharks that it can be folded into a suitcase.

“Barbara Corcoran is amazed by the idea and design”

Anton Willis continues by saying that a few years ago, he set out to design a kayak that he could literally store inside his bedroom closet. And to be able to do that, he looked back to one of his old childhood 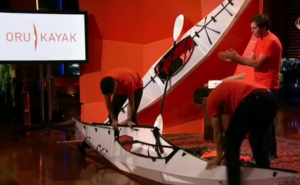 passions, which was origami.

“All the Sharks are looking very interested and amazed, while Roberto and Ardy unfold the kayak out of the suitcase”

Anton Willis says that the whole boat unfolds pretty magically out of a single seamless sheet, just like a piece of paper. He states that the material they have used is extremely durable, very sturdy and is extremely light. Anton says that the whole boat only weights twenty six pounds, and that the top seams are the only seams of the boat. He says that the boat is completely watertight, so you will stay dry, even in rough waters. He gives the word to Roberto, who is going to talk about what you can do with the kayak

Roberto Gutierrez takes the word and continues the presentation. He states that he is a former professional paddler, and he has tested their kayak on flat lakes, big ocean waves and even in whitewater rapids. Roberto states that the their kayak is fast and durable, which is great for an expert-level paddler like himself, but it is also stable, comfortable and easy to use, which is perfect for beginners. Roberto gives the word to Ardy Sobhani, who is going to tell the Sharks more about the company.

Roberto Gutierrez says that in nine months, they have launched a company, created a manufacturing line and they are shipping their kayaks all over the world. He states that they need a partner, in order to scale up the production and be able to meet the demands. He asks the Sharks who would want to jump into the water with them.

Kevin O’Leary and Robert Herjavec get up and walk towards the kayak. They pick it up, and hit it a couple of times to see if the kayak is durable. Robert Herjavec asks if he can test it out by sitting in it, to which Anton Willis complies.

“Robert Herjavec sits in the kayak and mimics as if he is paddling in a lake, after which he states that the kayak feels very solid”

Roberto Gutierrez answers the question by saying that they have sold over twelve hundred kayaks so far, at a price of eleven hundred dollars per kayak. This means that their total sales is over a million dollars. Roberto states that they primarily sale their kayaks on their website, which is going direct to the consumer. He also says that a typical kayak, with the same size and dimensions as their kayak, will sell for around a thousand and forty nine dollars, which means that the prices are roughly the same.

Anton Willis continues by saying that there are other collapsible boats and kayaks out there, but they are usually very expensive. They go for about four or five thousand dollars, are much heavier and are much harder to put together.

Anton Willis answers by saying that it costs five hundred and five dollars to build one of their kayaks, which is a lot and that is the reason why they are looking for an investment. They think that they can bring down the production cost to three hundred and fifty dollars, within the next year. Anton states that, at this moment, the work is quite labor intensive, which they are looking to replace some of those labor intensive handmade parts through automation equipment and assembly atomization. This would allow them to produce the kayaks much faster and much cheaper.

“Robert Herjavec asks the group why people are not willing to pay more for it, because he thinks the kayak is beautiful and unique”

Ardy Sobhani answers the question by saying that the projection for next year is an estimated four million dollars in revenue. This surprised the Sharks, because they do not understand how they will go from one million to four million in revenue.

Mark Cuban says that he thinks the product is absolutely beautiful. He states that he is not a big outdoors guy and that he has never been in a kayak his whole life, which is not a great fit. He states that for that reason, he is out. Kevin O’Leary says that there is an issue with the deal, because he doesn’t think that a five hundred thousand dollar investment is enough to automate the manufacturing process. He says that some of the equipment that the group needs, is very expensive. He also says that it is an interesting product but to him, it is not developed enough to know how much and how fast it can scale up. Kevin O’Leary is out.

Robert Herjavec says that he is definitely a customer, and that there are a lot of risks with the manufacturing process, which means that Daymond is right. Robert says that the group has a lot of unanswered questions out there, but sometimes he loves to make an investment because the product is cool. He states that he is a Shark, and he wants his investment back, so he makes an investment for five hundred thousand, for a twenty five percent stake in Oru Kayak. 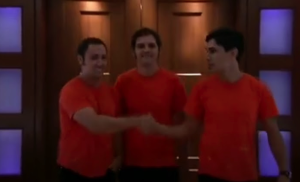 With the investment of Robert Herjavec, Oru Kayak was able to produce different models of their kayaks, and increase the sale price for them as well. There is no mention of Oru Kayak being the best or worst on Shark Tank. The reason that four out of five Sharks did not want to invest in Oru Kayak is because automotive manufacturing is very expensive and risky.

Best of all now in 2018 you can buy your Oru Kayak on Amazon, Click here to view the Kayak on Amazon with all discounts automatically applied. There are a ton of positive reviews for kayaks from Oru Kayak, which can be seen on Amazon, Facebook and several paddling websites. Many reviewers are very happy with their kayaks, and have gone out paddling with them often. Sometimes there is a fault in a kayak, but Oru Kayak respond to these by sending out new parts, or completely replacing the kayak.

Oru Kayak has flourished, with the help of Robert Herjavec. There are several different models, which go for anything between $1275 and $2475. There are also a lot of accessories that you can purchase in the online store. It is nice to see that Oru Kayak allows for monthly payments, so more people can enjoy their kayaks.