What Happened to Clock Kid – Ahmed Mohamed Now in 2018 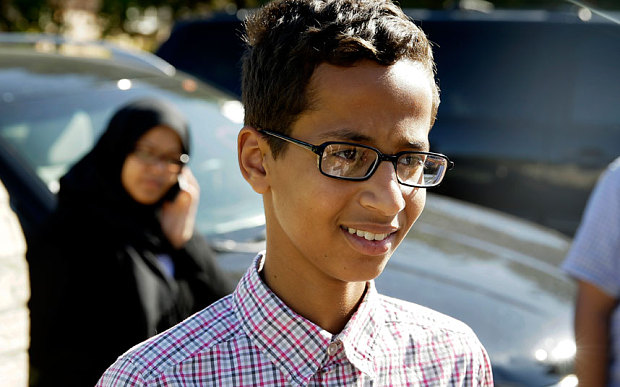 Tick tock ka-homeroom? What began as a normal day for 14-year-old Ahmed Mohamed quickly turned into a nightmare of supposed islamophobia. The young tech enthusiast brought in a clock he had invented to show off his electronics skills to his teachers. Fearing that the contraption was some kind of bomb hoax the police were called and Ahmed was detained by the local authorities. The story went viral and it wasn’t long before the internet was up in arms for this miscarriage of justice, but could this media narrative be a load of croc?

Born on the 29th of August 2001 to Sudanese born Mohamed Elhassan Mohamed and Muna Ahmed Ibraham, Ahmed Mohamed was known in his middle school for always toying with something. Whether it was a handmade remote for disrupting the overhead projector or building portable battery chargers for teachers it was clear that he was gifted when it came to electronics. So when on September 14th 2015 he was detained by local authorities on the grounds of possessing a hoax bomb the surprise on his face, and everyone else’s, was genuine.

He claimed to have built a clock out of scrap he found around his home then built a small pencil-case to house the device. Showing it off first to his Engineering teacher he was advised to keep it hidden for the rest of the day. He did not and revealed it again in English class. He set the time and set off the alarm which alerted his teacher to it. Again he was advised to not show it to anyone else, on the grounds that it looked like a bomb. Ahmed complied, but closed it with a cable rather than locking it, claiming that locking it might have looked more suspicious than closing it with a cable.

However it seems he was too late and he probably should have heeded the advice of his Engineering teacher, the English teacher confiscated the device and brought it before the principal who called the authorities. The police and the principal took him out of class and the 14-year-old techie was interrogated for an hour and a half by five officers. The authorities claim this was only to determine his intentions in bringing the “handmade” device to his school. He was subsequently handcuffed and taken into police custody.

Why was Ahmed Mohamed Detained? 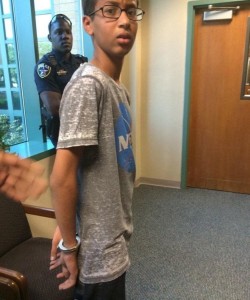 Ahmed was then brought to a juvenile detention center where he had his finger prints recorded, his mug shot taken and was questioned further before being released to his parents. The police announced that there was no malicious intent and he was not charged with any crime. When asked what the purpose of the clock was Ahmed Mohamed would only repeat that it was a clock, no broader explanation was forthcoming. He received three days suspension for his supposed misconduct.


The media explosion that followed was enormous. Two days after the incident was reported over a million tweets of #Istandwithahmed were posted. He also received support from President Barrack Obama, who invited him to the White House, he would eventually take him up on the offer for their annual Astronomy Night. Ahmed was interviewed by many major television networks and did a high-profile interview with Al Jazeera, a Doha-based news station partly funded by the ruling Family of Qatar.

It was here that he made the claim that the clock was built from scrap found around the house with the casing being a custom job. This was not the case. Examination of the clock reveals it to be a 1986 Jumbo LED digital Micronta alarm clock, most likely bought by Ahmed’s father when he first arrived in America, taken from its housing and placed in a pencil-case available on amazon. Though this may well have been what he meant.

The reaction from the school district defended the actions taken by their staff, claiming that if any student had brought in a suspicious looking object the situation would have played out exactly the same and requested to the Mohamed family that they be allowed to release their side of the story, no permission was given. It was also claimed by the Irving Mayor that Ahmed Mohamed’s response to the police officers was “non-responsive and passive aggressive”. They made requests of the family that his interactions with the police be released but again no answer was given.

Mohamed Elhassan Mohamed, Ahmed Mohamed’s father, has since withdrew all of his children from public schools and said of his son’s emotional well-being that he was deeply shaken by the events. In October 2015 ElHassan Mohamed announced that the family will be moving to Qatar to take advantage of a proffered scholarship for Ahmed at Doha Academy, from the Qatar Foundation for Education.

On the 23rd of November the family of Ahmed Mohamed demanded fifteen million dollars in compensation and written apologies from the Irving Mayor and police chief under threat of legal action. They claim that his civil rights were violated and the parties in question had the power to stop this but did nothing. As of December 2015 the incident is under investigation by the U.S. Justice Department to determine whether or not his civil liberties were violated.

They will be investigating whether the school itself has been discriminating against students based on their race, religion or nation of origin. This seems unlikely to be the case considering the testimony of former student Amena Jamali, 2015 Valedictorian who happens to be Muslim. She claims that the school bent over backwards to accommodate her, as they do for all their students, even allowing a month off for her to perform her Hajj.

In more recent news, the Libel suit filed by Ahmed Mohamed’s father on his behalf against Glen Beck has been dismissed. The family and the lawyers of Ahmed Mohamed intend to appeal the case against several of the defendants and media personalities at TheBlaze over comments made on air by Beck.

We will have more information as the deadline approaches.