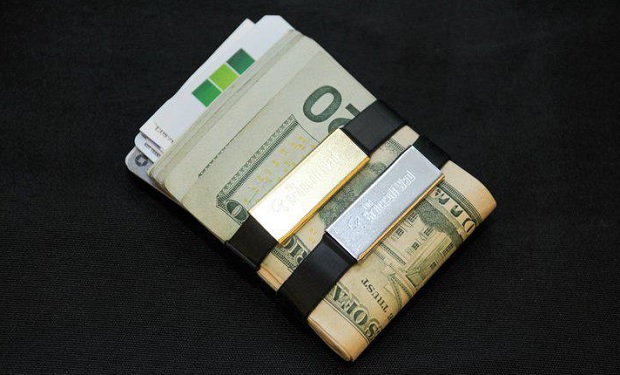 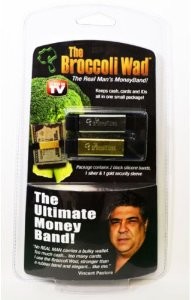 Johnny Gennaro is an innovative thinker who was inspired one day while watching a documentary. This particular documentary was about the original “Made Men”, or Mafiosos. While watching, Gennaro noticed that a great deal of these mafia members would take rubber bands off of bunches of broccoli and then use that as a sort of money clip. Seeing this generated an idea for a stronger, more flexible version of these bands. Gennaro decided to stick with the band’s origins and name his company the Broccoli Wad.

During the process of starting up his business and creating a prototype of his product, John became partners with Vinny Pastore. Pastore is an actor who is typically known for his mafia roles in movies. For example, he appeared in the HBO series Sopranos and the critically acclaimed film Goodfellas. Having Pastore become a part of the business definitely helped boost their visibility, but that still wasn’t quite enough. The two of them deemed it necessary to pack up their idea and bring it over to ABC’s Shark Tank, hoping that one of the Sharks would see the real potential in their new product.

Both Gennaro and Pastore enter the Shark tank and make an offer of $50k in exchange for a 20% stake in the Broccoli Wad business. They are both hoping that the Sharks will find this deal irresistible, but to really make their case, Pastore begins to explain their product. Typically, men usually carry their money in regular wallets. Wise guys, however, like to carry their money in wads. Gennaro chimes in to talk about how he came to know this. While reading a book that depicted the story of an FBI agent who invaded the mafia in New York. A key characteristic of the wise guys was that they never carried their money in wallets, but rather they used broccoli rubber bands instead.

Kevin O’Leary speaks up first by asking a fairly practical question. If these wise guys don’t have a wallet, then where do they keep their credit cards? As if this weren’t obvious enough, Pastore responds by saying that wise guys don’t keep wallets, and Gennaro jokingly states that sometimes they’ll have an I.D. on them, but usually it will be out of state and expired.

While samples are being passed out to the Sharks, Pastore admits that he did think that Gennaro was “off his rocker” when he approached him with the idea, but he quickly saw past that and saw the potential in the product. Robert Herjavec, clearly a fan of Pastore and his work, doesn’t want to step on any toes by suggesting that the Broccoli Wad isn’t anything special, but he really doesn’t think that a piece of rubber with a bit of metal is likely to make any ground breaking sales. Herjavec doesn’t think that this business is worth $250k. Barbara Corcoran is quick to agree with this observation. She simply doesn’t understand the concept and decides that she will not be giving them an investment. Corcoran even goes so far as to say that this is the worst idea she has seen on the show so far.

The two men don’t seem too upset or surprised by this decision because they claim that most women don’t get it because they don’t typically use wallets. That may or may not be true, but before it can be debated any further, Jeff Foxworthy admits that he is always having issues with finding the right wallet or clip to hold all of his money. According to him, his wallet became so thick that it was “almost like a phone book”. Foxworthy concludes that he actually likes the idea of the Broccoli Wad. 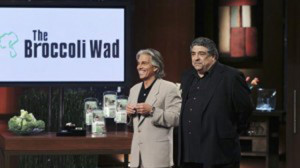 O’Leary jumps back into the conversation by asking how exactly they plan to sell these money bands. Each packaged unit comes with four bands and will sell for around $10-15 dollars each. In addition to that, they have already filmed two 2 minute advertisements that feature Vinny and his other co-stars from Sopranos. Soon they plan on doing some campaigning where Pastore will do appearances in Las Vegas casinos to promote the Broccoli Wad and the casinos have already agreed to give out samples to the players.

Despite all of this, Daymond John is still shocked when he finds out that Gennaro has already invested $200k into the business. In attempt to make a joke and lighten the mood, Pastore says this is because he was paid $190k to promote it. In all seriousness though, they both believe that this will become a very successful “as seen on TV” type of product, and they plan on using the money from the investment to get the necessary commercial time on television. However, what Gennaro also wants out of this is the advertising expertise of the Sharks to really help the Broccoli Wad launch forward.

What all the Sharks want to seem to know is, why isn’t Vinny’s face on the packaging if he seems to be the face of the company? Corcoran decides that she would be back in if they converted the Broccoli Wad into the Vinny Wad. However, Pastore isn’t so sure if he would be sticking with the business long term because he isn’t currently being paid enough. Deciding that this would turn into a far too expensive investment, O’Leary drops out. Foxworthy quickly follows suit by simply stating “this just isn’t for me”, and John says that he just doesn’t have an offer to make.

Surprisingly enough, the first Shark to make an offer is also the first Shark who said she was out. Corcoran decides that she has an offer to make that is directed specifically towards Pastore. She agrees to give them the $50k in exchange for 40% of the business, so long as Vinny puts his face on the packaging and the Broccoli Wad becomes the Vinny Wad. In addition to that, 20% of her desired 40% would go to Vinny. Pastore decides rather quickly that he would love to go in on that deal with her, and Herjavec says that it’s such a good offer that he has nothing to put up against it. The only person who really seems to be unsure about this is Johnny himself. He feels a little inferior and stammers a bit when asked if he is going to take the deal or not, but he ultimately ends up agreeing to the terms anyway. 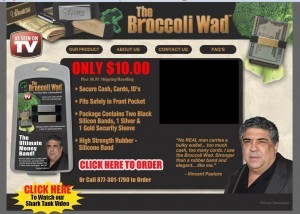 After the episode aired, the deal with Barbara did follow through and the Vinny Wad had its hot minute of fame. However, things have gone eerily quiet on all of the business’s social media accounts and the website has been down for quite some time now. The product is still available for purchase through Amazon in addition to a few other retail locations, but it’s popularity has gone down at an alarming rate. It is unclear why the Broccoli Wad tanked so abruptly, but we can only assume that it is because the relationship between Johnny and Vinny fell through.