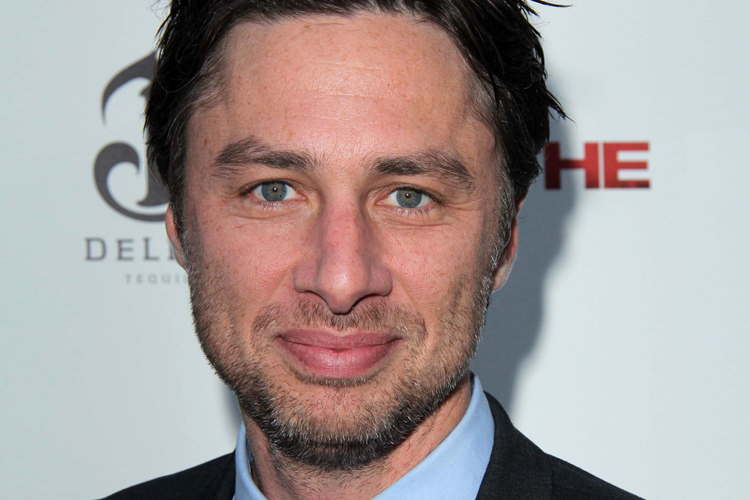 Actor, Director, producer. Zach Braff has done it all, well he’s done those three things so he’s no superman. Getting his big break in 2001’s “Scrubs”, he gained a huge following as the sensitive, and funny, leading man. He has gone on to direct critically acclaimed films and was an early bird in the crowd funding scene. So what is he doing now?

Zach Braff was born on April 6th 1975 I South Orange New Jersey. Anne Brodzinsky, his mother, is a clinical psychologist while his father, Hal Braff, is a trial attorney and sociology professor. His parents divorced while he was young and have since remarried. His brother, Joshua Braff, is an author with several acclaimed books under his belt.

Even when he was young Zach Braff wanted to be a film-maker. He described it as his lifelong dream. He first entered the industry in 1989, appearing in an unaired pilot called “High” alongside Gwyneth Paltrow and Craig Ferguson. The following year he appeared in an episode of “The Baby-sitters Club” and finished off his early acting career with a role of Woody Allen’s son in “Manhatten Murder Mystery”.

He returned to school in the mid nineties to study film at Northwestern University in Chicago. He wrote and directed a number of short flicks as part of the course, experience he would put to good use eventually. However, before his directorial début he joined the cast of a little known sitcom.

Zach Braff returned to acting in 1999. He got the lead role in the independent film “”Getting to Know You” and followed that up with a string of minor roles in television in 2000. 2001 would be a watershed year for Zach Braff. He landed the lead in the NBC sitcom “Scrubs”. The show stars Zach as medical intern Dr John “JD” Dorian and his best friend, played by Donald Faison, Dr Chris Turk. 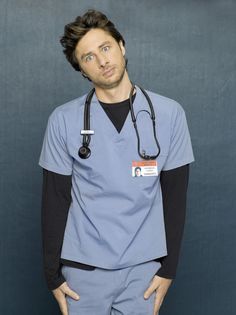 The show focuses on the point of view of JD, with episode themes unified by his narration. Coupled with his absurdist day dreams and the natural chemistry between the performers the show was an international hit. The show received much critical acclaim during its run, especially for JD’s fantasy segments, which incidentally they got from the Simon Pegg and Edgar Wright Show “Spaced”. The cast was fantastic though, break out characters like Dr Perry Cox, the hilarious jerk with a heart of Gold, or the ensemble dark horse of The Janitor. Neil Flynn played The Janitor off script most of the time, with many of his best lines being improvised. Originally he was to be a figment of JD’s imagination, but he proved so popular that the idea was scrapped.

While primarily a comedy show it was not afraid of tackling hard-hitting issues like death, the apathy that doctors develop and romantic problems. The final season of the show was something of a soft reboot. Switching over to ABC and losing a few primary cast members, season nine was poorly received by critics, with most fans simply denying its existence, similar to how they only made one Matrix film.

Zach Braff appeared in only six of the thirteen episodes of season 9, though he did a voice-over wrap up at the end of every episode. Through “Scrubs” he was finally able to realize his dream of directing, do so for several episodes of the show, before in 2004 writing, directing and producing “Garden State”. The film is about an actor who returns to his home state of New Jersey after the death of his mother. He based it partially on his life. The film received positive reviews upon release, and the soundtrack won a Grammy award.

The following year Zach Braff lent his voice to “Chicken Little”, the film was praised for its vocal performances, but critically panned. He reprised the role for the video game adaptation and Chicken Little’s appearances in the Kingdom Hearts games. In 2006 he appeared in Gabriele Muccino’s “The Last Kiss” and Jesse Peretz’s “The Ex”. Both films were poorly received by critics, and neither made back their budget at the box office.

He also had many guest roles on television, such as “Arrested Development” and “Clone High”. After leaving “Scrubs” in 2010 he took on a few more film roles, and a cameo appearance on “Scrubs” creator Bill Lawrence’s follow-up show “Cougar Town”. “Cougar Town” is a show that suffers from having a bad title, once you get past the first season it really is more like “Scrubs” than people think.

He has had some success on the stage, first appearing in “Twelfth Night”, staged in Central Park in 2002. In mid 2010 he took on the lead role of Cody in Steven Dietz’ “Trust”. The play is about a hot young musician who has just made the cover of Rolling Stone magazine dealing with his fiancé and his sexual fascination with an older woman. Most recently he opened on Broadway, in the musical “Bullets Over Broadway The Musical”. An adaptation of a Woody Allen flick.

What is Zach Braff Doing Now?

Zach Braff acted as the executive producer for “Video Games: The Movie” and for “The Internet’s Own Boy: The Story of Aaron Swartz”. In 2013 he took to kickstarter to secure additional funding for his second feature film. “Wish You Were Here” received half again as much of the $2 million asked for. It was released in 2014 to mixed reviews.

These days Zach Braff is trying to get a remake of the Danish film “Elsker Dig For Evigt” made, well he’s been trying to do this since 2006 but he is still on board to direct. He is set to appear in an unknown role in “The Disaster Artist”. A biographical comedy drama based on Greg Sestero’s non-fiction book about his life behind the scenes of Tommy Wiseau’s “The Room”. If you haven’t seen “The Room” please do so. It is a bafflingly bad, but effusively sincere film that seems to want to be a drama, but fails on every possible level.

Zach will also star in a film with Cameron Diaz called “Swingles” and “In Dubious Battle” an adaptation of the Steinbeck novel of the same name. 2017 will see Braff back in the director’s chair, shooting of Going in Style is underway in New York. The star studded cast of old Hollywood greats is being hit with a barrage of fan interruptions. On the comedy front Zach Braff has stated reently that he is more than up for another season of the critically and comercially acclaimed show Scrubs. He stirred fans of the series into a frenzy in a recent AMA. I for one am certainly up for a ninth season ;).