I don’t think any band has embraced being a one-hit wonder the way Los del Río did. With “Macarena,” the flamenco-pop duo provided a dance that would be performed in clubs and stadiums across the world for years. Let’s look and see how the song’s lasting fame has shaped Los del Río’s career.

Before their hit, Antonio Romero Monge and Rafael Ruiz Perdigones were playing in flamenco lounges across the south of Spain since 1962. In 1992, this fame led to a South American tour. While in Venezuela, they were invited to a private party held by Venezuelan media mogul Gustavo Cisneros, one of the richest people in the world. At the party, a local dance instructor gave a small performance. Her dance inspired Antonio to think of what would become Macarena’s chorus.

Later that year, the song was recorded, and in 1993 was released as a rumba. A second version, with more pop and flamenco stylings, became moderately popular in Spain, Colombia, Mexico, and Puerto Rico, where it was used as the theme song for a gubernatorial campaign.

This version was a small club hit on the American East Coast, notably New York City and Miami. In 1996, Miami radio personality Jammin’ Johnny Caride, as part of the production trio Bayside Boys, remixed the song. This remix added English lyrics to the chorus, and is the version most people think of when they think of the “Macarena.”

With a heavier dance beat, the Bayside Boys remix hit #1 on the Billboard Hot 100 in August 1996, and remained at the top for over three months.

The fourteen week stay at #1 is still one of the longest runs in Hot 100 history, and the track spent an additional 46 weeks on the chat outside the #1 spot. One of the things which led to the song’s popularity is its distinctive dance, though there is no clear consensus on the origin.

Do you remember how to do the Macarena?

The song’s rise to popularity coincided with an election year, and both American parties used the song to bring some populism to their campaign. The song was at its height during the Democratic National Convention, where it was played frequently. It’s also thought to have set a record for largest synchronized dance during a Yankees game when around 50,000 people did the Macarena.

The song has been covered, remixed, and parodied repeatedly. Los del Río released a Christmas version in 1996, taking advantage of its popularity. When Alvin and the Chipmunks released a dance album, the “Macarena” was on it.

MC Rage released a vulgar lampoon of the song, mocking the song’s success. Ironically, MC Rage’s rendition became the first hardcore song to reach the Top 10 of mainstream charts. The Animaniacs released a version, and in 2014, Miss Piggy from The Muppets lent her voice to the song for the film Muppets Most Wanted. 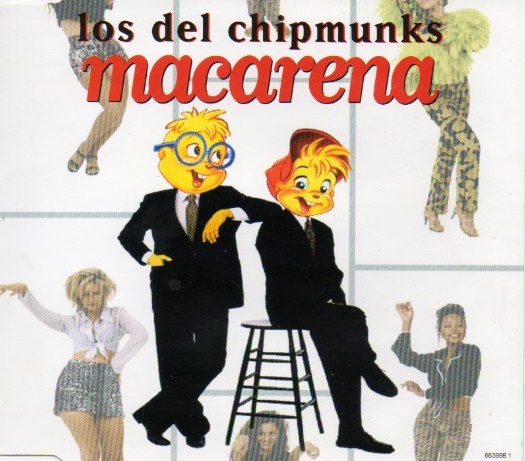 Only 90s kids will remember this abomination

In 2008 Los del Río remixed the song to celebrate its 15th anniversary, working with a variety of Third Coast and Dirty South producers, including T Lopez from Cash Money Records.

Last year, at the 2015 Rugby World Cup, the song was mashed up with a traditional Maori dance, in what the creators called “tongue-in-cheek” and everyone else called “culturally insensitive.”

Since the hit, Los del Río have continued to perform and record. El Pueblo Con Sus Ídolos, their most recent album, was released on October 14, 2015. This album, like many since their 1996 hit, is more focused around a traditional flamenco sound, with very light rumba influences.

The duo perform around Seville, Spain, having settled into a level of fame equivalent to what they had before the hit.