With its simple format and huge user base, Tinder quickly dominated the scene of app-based online dating. People gravitated towards the novel nature of the app, and the way it seemed to turn online dating from something serious into something whimsical and silly From references to “swiping right” and “swiping left” in pop culture, to the advent of terms like “tinderella,” the app changed the way that we think about online dating. When people are looking to hook up via their phones, the first option that comes to mind is likely Tinder, but there are other, sometimes better, options that are flying under the radar.

Maybe you’re tired of the cheesy pick-up lines or formulaic responses from people who seem to be taking a high volume approach to online dating. Maybe you’re tired of the embarrassment of seeing people that you know in real life on Tinder. Maybe you’ve got a strained finger from swiping too much. Maybe you can’t use Tinder because you don’t have Facebook.  Whatever your reasons are for wanting to ditch Tinder for something new, here are some options for your next cellphone dating app. It’s easy to imagine young entrepreneurs sitting around a table, examining the flaws of Tinder and trying to capitalize on our desire to meet new people without leaving our homes. Here’s what they’ve come up with so far. All of these apps are available for phones running both Android and IOS phones. 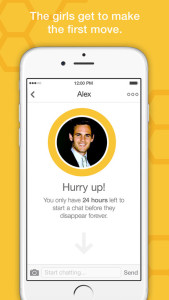 While Tinder provides either of the people in a given match the opportunity to start the conversation, the reality of the situation is that usually, the onus is on the guy to get the conversation rolling. With Bumble, an app created by a dissatisfied former employee of Tinder, a conversation can only be started by a woman, and if the woman doesn’t say anything within one day, the conversation disappears. The app has been gaining popularity, both because of the novelty of this kind of conversation, and because it legitimately shifts the power dynamic of dating in a way that is not seen elsewhere. With Bumble, women don’t have to listen to pick up lines or stock conversation openers if they don’t want to, which could surely be refreshing. 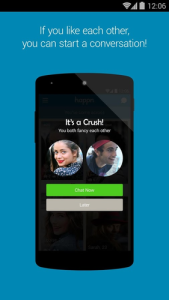 This app toes the line between creepy and sweet; think Tinder crossed with the “missed connections” section of Craigslist. With Happn, your phone’s location services are used to show users you’ve crossed paths with, within around the area of one city block. From there, you’ll have the option to “like” people, like you would with Tinder. Happn seems perfect for people who are too shy to strike up a conversation with an attractive stranger in the line at the coffee shop. Another feature of this app is that they have a partnership with Spotify which allows you to send a song to potential matches. A pitfall of Happn is that it really doesn’t have a very big user base yet, so if you do see someone on the street that you’d like to match with, odds are that when you open up your app you won’t find them on there. 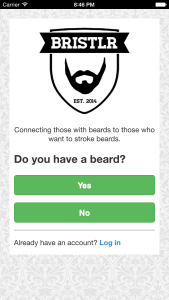 This is an app that I’m not even allowed to use because I’m incapable of growing facial hair. Bristlr is a dating service for people who like bearded men and while it seems a little bit ridiculous, niche dating services like this are gaining in popularity. People are tired of battling the surging tide of potential matches on Tinder and are looking for more specialized apps that align with their interests. The beard prerequisite seems to be the only thing that distinguishes this app from Tinder; aside from that it has all of the same concepts with regards to swiping and matching. Woman who join the service are not required to have beards. 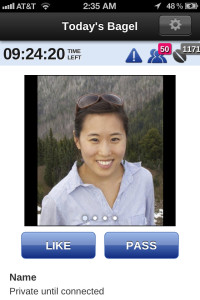 This enticingly-named app operates as a kind of antithesis to Tinder. Instead of endless swiping, users only get one bagel (their word for match) every day at precisely noon. A downside of this is that it doesn’t offer the same kind of mindless entertainment value of Tinder. But this could also be seen as a positive, as it forces you to consider each person as a person, and perhaps take a chance you wouldn’t otherwise take. If you both accept, a chat will start up and stay active for one week. The idea seems to be to get people to try out a bunch of low risk coffee dates with a bunch of people. The app does offer the possibility of matching with more than one person per day; you can buy add-ons called “coffee beans” that allow you to get more “bagels.” 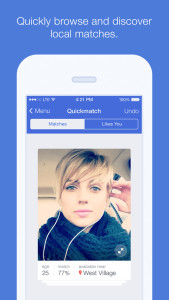 One of the contributing  factors to Tinder’s surge in popularity was that it steered away from the long, detailed profiles of Ok Cupid that made online dating feel a little like doing your taxes. However, with the hype of Tinder dying down,  people are drifting back to Ok Cupid. It’s one of the most polished, well-designed sites. It has a huge worldwide user base, and allows you the entertainment of answering endless-seeming questions about your personality. A downside to Ok Cupid is that, like Tinder, many of the best features must be paid for to be used.

But what if you know exactly what type of a person you’re looking for and don’t want to be bothered with swiping through the sea of faces on your screen? There are plenty of new niche apps being released all the time, and some of them can get unbelievably specific, which some people find beneficial. There’s “Farmers Only,” a site for farmers, ranch hands, and those who prefer the country lifestyle. There’s “3nder” (pronounced “thrinder”) which targets users who are looking for threesomes. There’s Sizzl, which is a place where bacon lovers can connect. There’s “Trek Passions,” an app geared at science fiction fans. Maybe the most confusing on I’ve come across is “Tindog,’ where you upload a picture of your dog and then swipe through the pictures other people have uploaded of their own dogs, connecting with people who’s dogs look appealing to you.