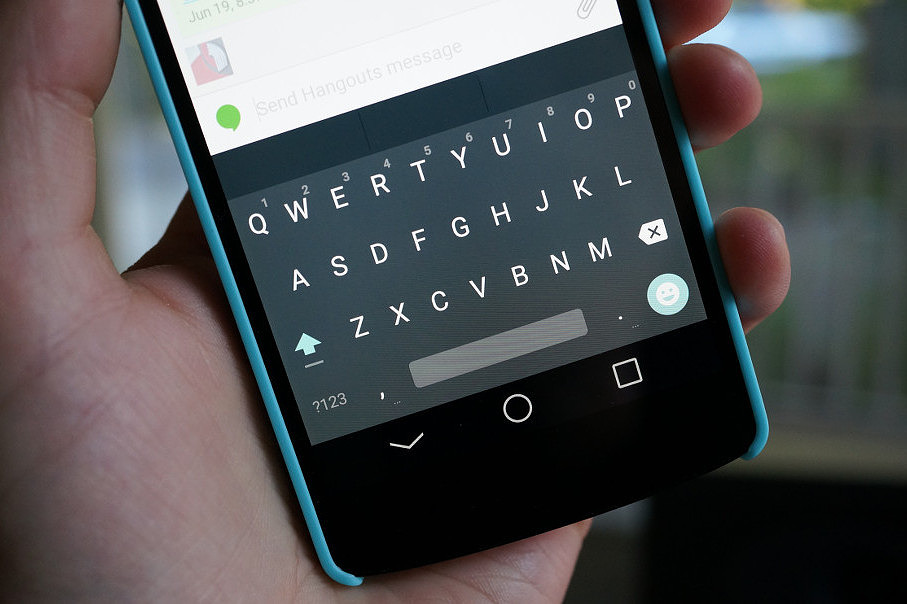 One of the biggest advantages of having an Android device is the ability to customize your device’s setup. From fashion to function, the Android community offers plenty of tweaks to allow you to change exactly what you want to change, in exactly the way that you want to. Among those tweaks? New keyboards. Maybe you think that the stock Android keyboard is too difficult to use. Maybe you think it’s ugly. Maybe you just want to try something different. Here is a list of some of the best and most popular Android keyboards of 2017. 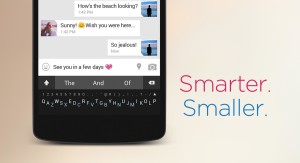 At first glance, Minuum looks sort of stupid. Minuum’s main gimmick is that its keyboard is contained on a single line. Every character is on one line, and it’s very small. (Hence the name, Minuum.) To make a space, you simply slide your finger to the right. To delete a word, you slide your finger to the left. You swipe to the top left corner of the screen to make a line break.

You’re probably wondering, how in the world is Minuum able to know what you’re typing, when every character is so close together? Minuum uses a combination of predictive algorithms and an artificial intelligence engine to know what you’re typing, even when your fat thumbs just input a bunch of gibberish. If you’ve ever texted on an old school cellphone, you’ve probably had a similar experience. Instead of having to punch in a single key multiple times, you could just type it once, and the phone would know what you meant when you selected a certain combination of numbers in succession.

Minuum may seem like it’s not worth your time, but it’s actually pretty innovative. It’s not just change for the sake of change — a smaller keyboard makes it easier to read from the screen, and it also gives your device a more all-around minimalist, clean look. I recommend Minuum to someone who wants something different, but not so different that it will take 20 minutes to draft a single text message. 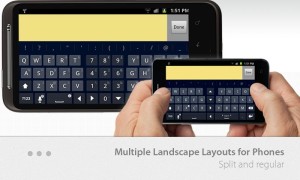 This one is for you tablet users.  I use my thumbs when I type on my phone, so it just feels natural to do the same thing on a tablet. I wouldn’t describe my hands as small, and it is a major pain to reach those ‘F’ and ‘G’ keys sometimes. This is far from an uncommon issue among tablet users. And Thumb Keyboard saw that issue, and solved it.

Thumb Keyboard also has the same kinds of basic customization features that you’ll see in most other keyboards. You have the ability to change the color, background and key spacing of your keyboard, among other things. They have a word completion/prediction image, like their competitors. It’s a great all-around keyboard, with a focus on ergonomics and convenience for the user. 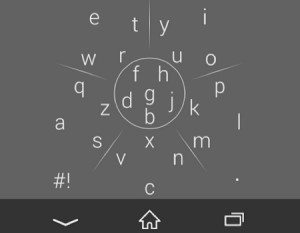 I want to introduce a more unique keyboard. NovaKey is relatively new, and at first glance, it looks like a practical joke. The NovaKey interface seems like someone ate a keyboard and threw up on the screen. It’s very intimidating when you first try to use it, but with practice, you’ll find that it’s actually incredibly efficient and faster than other more traditional layouts.

To go into further detail, NovaKey’s unique layout makes it to where each letter has its own unique gesture, which means you’re able to select each letter, number, and punctuation mark with a simple short swipe. It’s intuitive, it’s efficient, and the more you think about it, the more it makes sense. As a writer, I type a lot on all platforms, and I’ve found that NovaKey is one of the better keyboards out there.

I think that the learning curve for a lot of these more “alternative” keyboard layouts is steep, but every layout starts somewhere. When it was first released, the Swype feature on Android phones was criticized as being overly-complicated, and trying to fix a problem that didn’t exist. People had no problem typing traditionally. Today, many people use and love Swype. It’s just a matter of getting used to it. 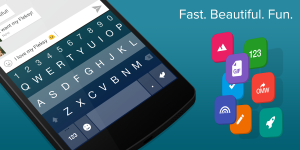 Fleksy is the keyboard for the control freak, offering more customization than any other custom Android keyboard out there. Fleksy has its own collection of extensions, allowing you to make your keyboard as simple or as complicated as you would like. In my opinion, some of the extensions are more novelty than functional, but they’re still cool.

Fleksy enables you to design and intimately customize your own theme, and set your own different gestures. The most popular gesture is the swipe gesture, where the user is able to swipe backwards to delete, and swipe forwards to add a period. Fleksy boasts that its comprehensive gestures account for it being the “fastest keyboard in the world”. Fleksy also has predictive texting, like SwiftKey. The jury is still out as to which engine is superior, however.

Fleksy’s extensions include things like a GIF library, allowing you to select from a library of .gifs and send them over text. Features like a GIF library are fun, but I don’t know if I would say they’re essential. Fleksy also offers an invisible keyboard option, which is pretty useless aside from looking cool and making it easier to read long text messages. Fleksy is a solid keyboard, with a lot of options that blend fun and function. 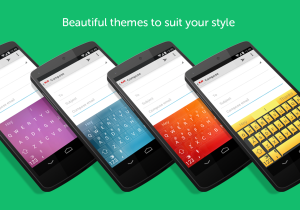 No surprise here. SwiftKey was released years ago, and it’s still the top dog when it comes to Android keyboard tweaks. SwiftKey’s claim to fame is their artificial intelligence, which learns your typing quirks and favorite terms over time to predict what words you’ll type next. You can be typing “I’m on my way home!” and SwiftKey will know what you’re writing by the time you type “on”. SwiftKey’s prediction isn’t just limited to text. SwiftKey is also able to predict which Emoji you’re going to use next. (I’ve found that this feature is a little iffy, but it’s still fun.)

SwiftKey’s greatest asset is its simplicity. it isn’t too gaudy, and it isn’t too complicated. You’re able to configure the basic appearance of the keyboard by browsing a theme library, and choosing different colors yourself. The overall typing experience is enhanced by SwiftKey’s intelligent auto-correct and predictive texting. SwiftKey is the perfect example of what a tweak should be. It builds upon the adequate, though imperfect, stock Android keyboard, and it makes it better.

There are plenty of other amazing keyboards that couldn’t make this list. Google Keyboard (Free) is a user-friendly keyboard that comes preinstalled on some Android devices, but not on all of them. SlideIT ($3.99) is similar to keyboards like SwiftKey and Swype, and it’s pretty popular. There a lot of keyboards to choose from when you’re trying to customize you’re Android device, and there’s one for pretty much anyone. It’s just a matter of looking in the right places.