Roominate is a clever and unique construction set that blends the skills of building, creativity storytelling, and even circuitry into a toy that gets kids excited about learning. After its founders met in the master’s degree program of Stanford University, one of the world’s most prestigious institutions for research and education, they learned that less than 15% of women enter college intending to major in a STEM (Science, Technology, Engineering, or Math) field. It was then that they agreed to make it their mission to inspire the next generation of inventors.

The duo of Alice Brooks and Bettina Chen appeared on shark tank on September 26, 2014, to inspire the Sharks to see the opportunity in revolutionizing the construction set industry by focusing on engineering and circuitry, as well as the education of young girls.

The two women entered the Shark Tank seeking an investment of $500,000 for a 5% interest in their company. They began with a simple argument on the influence that toys can have on what type of person everyone grow ups to be. That favorite toy that you loved as child, was it playing with a fire truck, or picking 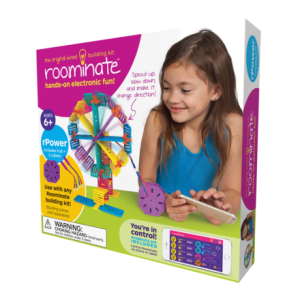 out clothes for a doll; what effect did that have on you, and what effect is it having on our children? What was even more compelling was the Roominate argument: what if that board game, was an actual construction set that let you actually build those hotels, what if those crayons you used to draw pictures was actually a toy that let you design your own prototype? For Alice, co-owner of the business, her turning point came when she asked her father if Santa Claus would be bringing her a new Barbie for Christmas, a few weeks later she opened her shiny new saw! Her father’s words, “build the dream house yourself.” Ever since, she was passionate about engineering.

The pitch went well at first, Roominate had some impressive numbers, entering the Shark Tank with over $1.7 million dollars in sales, in little more than a year and a half. And to add to those impressive stats, Roominate was set to be in 596 Toys-R-Us stores and 1,500 Radioshacks by the following year. Mr. Wonderful, Kevin O’Leary, was truly impressed with entrepreneurs ability to get mass distribution so quickly, a task that is often insurmountable for young inventors. That said, he was weary of the reality that all of their claims of distribution were for the future, and at present, their sales were online focused. In his words “I’m being asked to pay for success before I know with certainty I have it.” The Roominate team quickly defended their numbers, responding that they have a clear track record of success, with sales more than tripling each year. 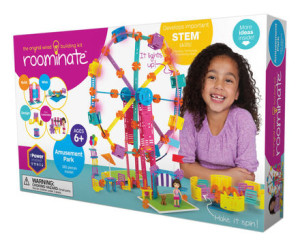 Mark Cuban, who in order to prove the versatility of Roominate, was built a basketball court with complimentary airplane as a sample, was impressed with the success of the two female inventors. The ingenuity and dedication of the women brought out the family man that accompanied Mark’s own success. With a net worth of over $3 billion dollars, Mark expressed concerns that his two daughters may acquire a sense of entitlement, instead of the strong work ethic he developed. So, he made the entrepreneurs their first offer, the full $500,000 for 5% of the business, but with one contingency, his daughters had to be a part of the project and have the opportunity to lean on Alice and Bettina as mentors. Lori Greiner took the opportunity to jump into the deal as well. Known to her other successful entrepreneurs as The Chickstarter, she was excited to join another project with passionate women set out to inspire and innovate.

The two Roominate owners didn’t need take a moment to think it over, with two sharks ready to join the team, they were excited to say yes!

Roominate Now in 2018 – How They’re Doing After Shark Tank 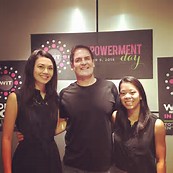 After Mark and Lori’s investment of $500,000, Roominate has grown in multiple exciting directions. From an early goal of teaching children about engineering and circuitry, now, thanks to Mark Cuban’s expertise, Roominate has expanded its teaching tools to include teaching kids about programming. The new “rPower” is a new product from Roominate that acts as a small hub that connects all the circuits and lights from your Roominate set, and allows kids to control them by creating a program on the Roominate App!

From the impressive beginnings of $1.7 million dollars in sales by 2014, the company has exploded in growth with a whopping $4.5 million in total sales today. And for Roominate, that is just the beginning, that impressive sales number does not include the lucrative contract they just entered, which will have Roominate sold in 800 Walmart stores, as well as on Walmart.com. Roominate expects the Walmart deal alone to net them additional millions in sales.

The duo entrepreneurs, Alice Brooks and Bettina Chen, have also upgraded their workspace since Shark Tank. The team now has their own Roominate Headquarters in the great state of Wisconsin, along with 8 new employees. Now, after winning Time Magazine’s Toy of the Year Award, and with two dedicated sharks on their side, Roominate is on track to achieve its goal of inspiring children across the world.