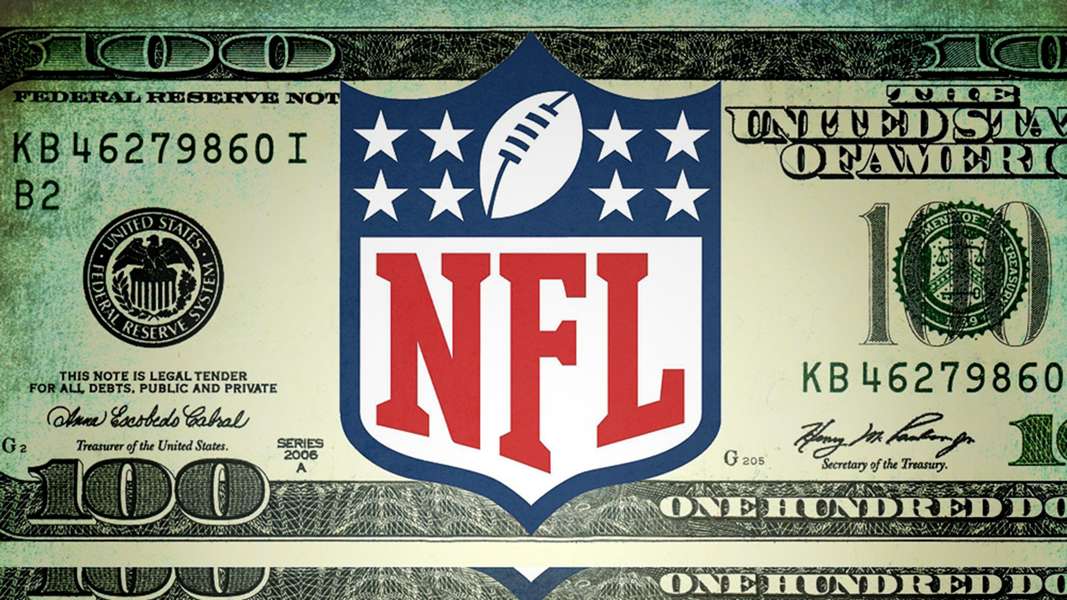 Football is arguably the most popular sport in America. Whether it is at a high school, collegiate, or professional level, a lot of people in America watch football. In the National Football League, players are paid millions upon millions of dollars to buckle down each Sunday and do their city proud on the gridiron. Who are the highest paid NFL players? You’ll find that all of the players on this list are quarterbacks, which is understandable. The quarterback is a central cog in any football team, and they do a lot of high-risk high-reward work. They’re often thought to be the “face” of the team.

In this article, I’m going to break down the top ten highest paid NFL players. Without further ado, let’s get right into it. 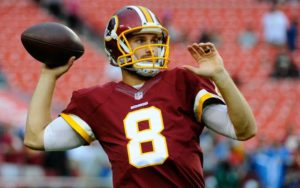 We start the list off with Kirk Cousins, quarterback for the Washington Redskins. Cousins has been a bit of a sleeper hit in the NFL. In 2012, he was drafted by the Redskins in the fourth round, coming out of Michigan State. He mostly sat on the bench behind 2011 Heisman Trophy winner Robert Griffin III, filling in when RG3 was injured or as a relief quarterback. It wasn’t until this last 2015 season that he really had his time to shine. Named the Redskins starting quarterback during the preseason, Cousins was able to lead his team to the playoff and to a divisional title. That year, he was named the NFL’s leader in pass completion percentage. He may not be the biggest name on this list, but Kirk Cousins is certainly a player to watch over these next few seasons. Cousins was set to be an unrestricted free agent this year, but the Redskins placed the franchise tag on the quarterback (worth a little under $20 million) to make sure that they kept this budding star on their roster. 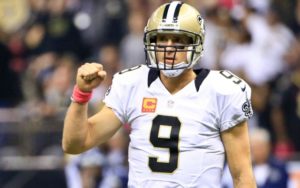 Drew Brees left college as one of the most highly decorated players in Big Ten history and was thought to be one of the best players to come out of Purdue University. Brees was initially drafted by the San Diego Chargers in the 2001 NFL Draft, but after an injury kept him off of the field for an extended period of time, he decided to sign with the New Orleans Saints, where he has seen a tremendous amount of success. In 2009, he led the Saints to their first ever Super Bowl title over Peyton Manning’s Indianapolis Colts. He has brought them to three playoff appearances since then. Just last year, Drew Brees became the fastest player to reach 400 total touchdowns. The Saints pay Drew Brees well to make sure that this franchise quarterback stays among their ranks, but keep in mind that that $20 million figure above doesn’t include the endorsement deals that he has with companies like Verizon Wireless, Nike, and Wrangler. 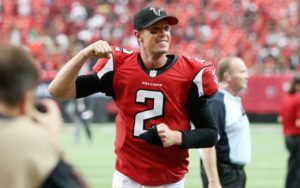 Matt Ryan also had a fairly impressive college career. Ryan originally played for ACC school Boston College, and during his last year playing for the Eagles, he helped lead them to a divisional championship game. That same year, he was named ACC Player of the Year. This illustrious resume led to him being selected with the third overall pick in the 2008 draft by the Atlanta Falcons. During his time with Atlanta, Ryan (alongside fantastic receivers like Tony Gonzalez, Roddy White, and Julio Jones) brought the Falcons to four playoff appearances and two divisional championships in an eight-year span. He has been widely considered to be one of the most consistent quarterbacks in the NFL. In recent years, his play has been plagued with supporting a poor defense, adjusting to new offensive schemes, and injuries. Still, the Falcons still view Matt Ryan as their franchise quarterback, and they pay him handsomely to fill that role. 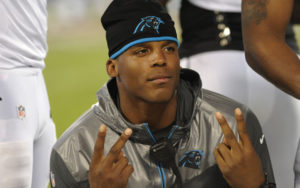 s far as football players go, Cam Newton has burned fast and bright. Newton played collegiately for only one year, as a member of the Auburn Tigers. He was able to lead the team to a national title. The Georgia native holds the honor of being the only player in modern football history to have been awarded the Heisman trophy, win a national championship, and be chosen with the first overall pick in the NFL draft within the span of a year. He had a fantastic first year with the Carolina Panthers, shattering records for passing and rushing yards. He had a bit of a slump for the years to follow, but he was voted NFL MVP in 2015 for leading his team to the 2015 Super Bowl. With all of these accomplishments and honors, it’s mind-boggling to think that this guy has only really been playing football on a national stage for the last 5-6 years. 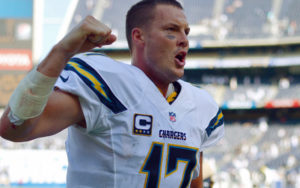 hilip Rivers was drafted with the fourth overall pick in the 2004 NFL Draft by the New York Giants, who traded him to the San Diego Chargers for their first round pick, Eli Manning. Rivers has remained in San Diego ever since. Remember when I mentioned Drew Brees leaving San Diego earlier on this list? When that happened, Philip Rivers stepped up to play in his place. From there, he led the Chargers to five separate playoff appearances and three divisional championships.  His career passer rating is one of the best all-time among other NFL quarterbacks (placing him above legendary quarterbacks like Joe Montana and Dan Marino), and he holds the NFL record for completions in a non-overtime game. Last year, San Diego offered Rivers a 4-year, $84 million contract extension, which he accepted. This contract was followed by a rather disappointing season for the Chargers, but Rivers still performed well, setting career highs for pass completions, passing yards, and pass attempts. 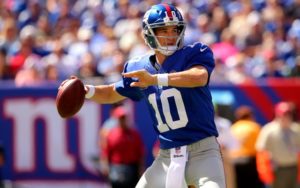 ince his older brother retired last year, Eli Manning can now say that he is the highest paid NFL player in his family. Manning is pretty much the definition of a franchise quarterback. He has played with the New York Giants since 2004, and during that time, he has brought the New York-based team to five playoff appearances and two Super Bowl championships. He was named MVP in both of these Super Bowls, making him one of five NFL players to have done so. Manning boasts 294 career touchdowns and nearly 45,000 career passing yards. He also holds an array of records for the New York Giants, like career wins, pass completions, and passing touchdowns. Eli Manning is well-known for his ability to remain calm in the face of high-stakes situations. Although he makes $21 million per year with the Giants, keep in mind that Manning also has sponsors in companies like Oreo, DirectTV, and Reebok. 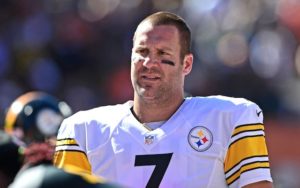 Although their play styles are pretty different, Ben Roethlisberger’s story is similar to Eli’s. Roethlisberger was drafted in the first round of the 2004 NFL Draft by the Pittsburgh Steelers, and he has played for that team ever since. With the help of key people like Troy Polamalu and Mike Tomlin, Ben Roethlisberger and the Steelers have since seen 7 playoff appearances, three divisional championships, three conference championships, and two Super Bowl championships. Pittsburgh is used to a certain degree of success from their NFL team, and Big Ben has made sure to deliver on that expectation. Roethlisberger ranks 9th all-time in NFL passer rating and is one of the six quarterbacks in NFL history to have beaten at least 31 of the current 32 NFL teams. He is known for a more rough-and-tumble and hard-nosed style of play, which has resulted in multiple injuries that he has fought through throughout his career. 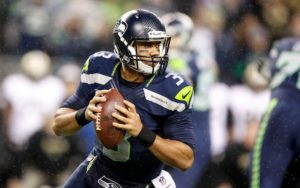 Russell Wilson is living proof that you don’t have to be drafted in the first round to have a successful NFL career. Wilson was drafted out of Wisconsin in the 2012 NFL Draft by the Seattle Seahawks. In his second year with the team, he led Seattle to a Super Bowl championship. The next year, he brought them to the Super Bowl again, but this time, they narrowly lost to the New England Patriots. Russell Wilson is another one of those players who has burned bright and fast during his career, having won more games than any other NFL quarterback in his first four seasons of play. Last year, Wilson and the Seahawks agreed to a monstrous contract extension that would ensure that this young star would remain playing at CenturyLink Field for the years to come. 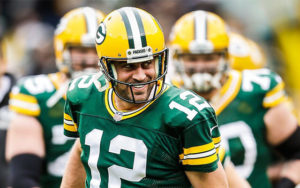 efore, I talked briefly about Matt Ryan and Philip Rivers, two quarterbacks who are hailed for being precise and consistent quarterbacks. Aaron Rodgers is thought to be the precise and consistent quarterback. Drafted by the Green Bay Packers in 2005, Rodgers came off the bench to replace Brett Favre in 2008, eventually leading the team to a Super Bowl championship in 2010. With the help of Rodgers, the team hasn’t missed out on the playoffs since 2008. Today, Aaron Rodgers is the NFL’s all-time leader in passer rating during the regular season, and he holds the best touchdown-to-interception ratio in NFL history. He’s one of those players who fans can always count on to deliver quality play. Keep in mind that, on top of this beefy $22 million per year salary, Rodgers also has a highly profitable sponsorship deal with State Farm. 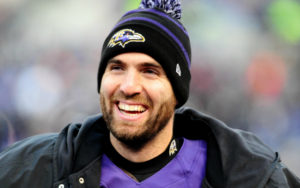 This may come as a bit of a surprise to a lot of people, but I promise you that it’s true. Joe Flacco, the quarterback for the Baltimore Ravens, is the highest paid player in the NFL. Flacco has played for the Ravens since he was drafted in the first round by them in 2008. Since then, the team has been to the playoffs six times. In 2012, his outstanding post-season play resulted in a Super Bowl championship and an MVP award for Flacco. (During that post-season run, he tied Joe Montana’s post-season record for touchdown passes without an interception.) Flacco has been the cornerstone of the Ravens offense for the last several years, and he is known for having a strong arm, a calm demeanor, and strong post-season play. A couple of months ago, Baltimore and Flacco agreed on a contract extension that would make this unassuming quarterback the highest-paid player in the National Football League.