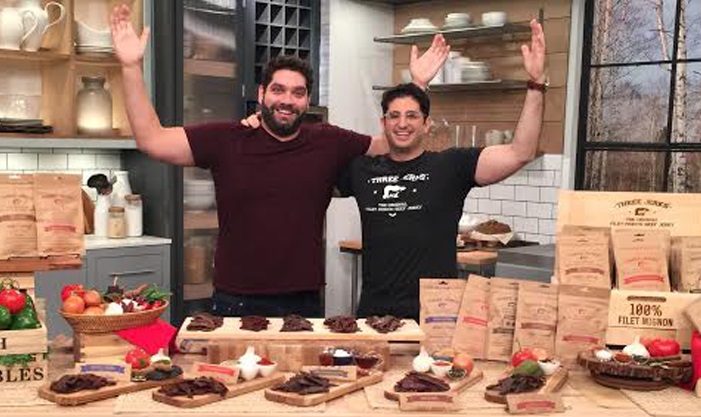 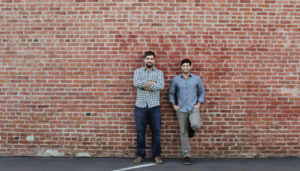 Three Jerks Jerky is a specialty food company that makes a premium version of the old time favorite, beef jerky.  The jerky reached premium status by using only the best cut of beef, filet mignon, as well as being gluten free, with zero MSG, sodium, or artificial ingredients.  The Three Jerks Jerky creators, Jordan Barrocas and Daniel Fogelson, are long time friends, and occasional jerks, that love their beef jerky.  The big idea moment for the two professional carnivores came when they discovered where their meaty snack originated from on the frame of a beefy cow.

In the world of beef the tenderness of meat, from least to best, goes Round, Sirloin, Rib, and then not so surprisingly, Tenderloin.  So, once the Jerky duo, discovered that most jerky was made from bottom round beef, all they way back at the least tender part of the spectrum, they set out to make the best jerky possible.  The plan?  To use the absolute most tender and flavorful cut of beef, filet mignon from the tenderloin.  From there, they started selling their high grade product and working to educate the world about what a quality snack should taste like.

On October 30, 2015, Jordan and Daniel pitched their idea on Shark Tank, looking for the right investment to get them over the hump, and spur enough growth in their company to get Three Jerks Jerky in the hands of every hungry American. 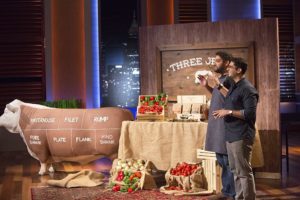 The duo of jerky connoisseurs entered the Shark Tank seeking an investment of $100,000 for a 15% interest in their company.  They began their pitch by explaining a common occurrence with modern day consumers.  You start eating a semi-familiar food, and then a few moments later you are left wondering what did I just eat?  And that thought is often triggered when eating beef jerky because that jerky is either as tough as shoe leather, or filled with so many preservative and chemicals, that you can’t even pronounce the ingredients.  Conversely, according to Jordan, Three Jerks Jerky is one hundred percent filet mignon, and has no artificial ingredients, plus it’s delicious.    As the Jerky team continued to describe just how tasty their product was, the Sharks were aching to give the specialty jerky a try.

When the Sharks were finally treated to samples, the overall impression was shock.  From Robert saying it’s amazing, to Daymond John just saying “wow” each Shark was genuinely surprised how much the higher cut of meat affected the flavor.  Barbra Corcoran did have a concern with the level of sodium in the jerky, but her fears were quickly calmed by the Jerky team explaining that the sodium is actually lower than most brands, and in Three Jerks Jerky no sodium or sodium nitrates are added to the meat.  Plus, their product is packed with protein, which makes it a go to snack for people into fitness.

With the flavor bulling the Sharks over, the next thing to find out was what was going on with the business side of the company.  Kevin O’Leary began the inquiry by asking how much the jerky costs for a consumer.  Unfortunately, he wasn’t pleased to hear that a single package is $11.99 as compared to the average $5-6.99 for a normal pack of jerky.  The Sharks were worried about the premium price, and were very interested if the Jerky duo had a reasonable explanation.  For Three Jerks Jerky, they recognized the high price, but the issue was that they are being killed on their costs of goods.

Each time the entrepreneurs want to purchase ingredients for their products, they have to purchase the minimum amount allowed by the manufacturer, instead of buying in bulk.  That inability to buy large quantities, forced them to raise the price of their jerky.  That said, the expectation of Three Jerks, was that once they have a Shark on their side, their orders would grow, and they could finally buy big quantities, which would significantly lower costs. 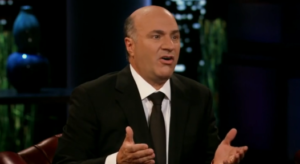 O’Leary acknowledged the prospect of bulk purchasing, but was compelled to ask whether bulk manufacturing was even something the company had prepared for.  Luckily, the company had this part planned out and had already secured a co-packer.  A co-packer, also known as a contract packer, is a company that packages and distributes a company’s products so the business owners can focus on sales.  According to the Jerks, their current co-packer was excited that they were in the process of partnering with a Shark, and assured them that the facility was capable of quadrupling production, and producing up to 50,000 units per week.

Robert Herjavec was intrigued with what the company had already accomplished but he questioned if Three Jerks Jerky would continue to grow.  For Three Jerks, they saw the future growth of their company coming from reaching national chains, unlike their current model which was only a few stores and online.  Plus, their current sales of $350,000 were reached with just the two entrepreneurs working for the business.  With an influx of capital and the team that each Shark has at their disposal, they fully expect their premium jerky could go nationwide.

Mark Cuban was not as confident that Three Jerks Jerky would reach their lofty expectations.  For him, as a “Jerky Aficionado,” he had already seen tons of small manufacturer that each believe they are the next high-end jerky.  Those companies are content with making $50-100,000 sales per year, and don’t mind cluttering the market with multiple brands.  So, even though he did really like the jerky, since they were entering a brutally competitive space, and were just in the first inning, he was not willing to take the journey with the Jerks. 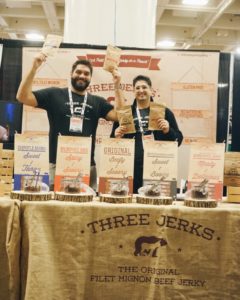 Kevin O’Learly was surprised he actually liked the taste, but feared that simply using Filet Mignon was too easily copied by competitors.  So, he decided that he would make the entrepreneurs an offer, but an offer that considered the risks.  Therefore, he believed he should be an equal partner in the business, as the new third Jerk.  So his offer was $100,000 for 33%.   To sweeten the deal, Kevin also added that due to the premium quality of the jerky, he would also be willing to promote the jerky as pairing well with wines.  An endorsement that Kevin believed would be very persuasive as he is a member of The Confrérie des Chevaliers du Tastevin (an exclusive fraternity of wine enthusiasts).

Robert was also willing to make an offer.  For Robert, he did feel that the future of the business would be a grind, but he had a lot of confidence in the Three Jerks team because they had done so many things right already.  Robert’s offer was $100,000 for 20% of the business.

Daymond quickly jumped in before the entrepreneurs could respond to Robert.  Daymond explained that he was a “jerkoligist” due to his mother often serving him jerky as snack throughout his childhood.  So, as a jerkoligist, he could tell that Three Jerks Jerky had something special, and with his relationships with the biggest distributers in the business, he thought a partnership would be beneficial to everyone.  Therefore, he offered $100,000 for 20% of the business.

Still seeing the opportunity to make money, Kevin O’Leary decided to adjust his offer.  Unwilling to be anything less than an equal partner.  Kevin chose to go the other direction, and offer the entrepreneurs more money.  His new offer was $150,000 for 33%.  Seeing his chance at a deal slipping away, Daymond decided to modify his offer with a little more complexity, but with a lot more incentive.  He offered $100,000 for 15%, but with an option to purchase another 15% for 100,000 after he proved to them that he was a hard working partner that was beneficial to the business.  However, he needed an answer immediately because he prefers decisive partners.

With multiple offers on the table, the entrepreneurs thanked the Sharks for believing in their business, but they had to say yes to Daymond! 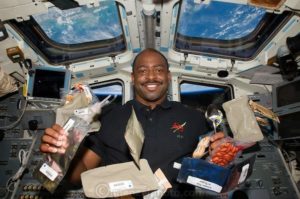 After Daymond’s investment of $100,000, Three Jerks Jerky’s sales were really beefed up.  With an impressive $350,000 in sales before entering the Tank, the company sales have jumped over the moon at a staggering $1.4 million in sales.

And speaking of being over the moon, since being on Shark Tank, Three Jerks Jerky has entered into some creative partnerships.  One of those partnerships was with Space-X, which actually agreed to send Three Jerks Jerky to space!  With a dramatic launch, the tasty jerky was able to delight lucky astronauts on the International Space Station.

Another great partnership, that Daymond was able to connect the Jerky team with, was a large scale co-packer that could help the company meet the demand that a company with 1.4 million in sales would need.  Plus, the new co-packer’s facility, provided the business with the opportunity to finally buy in much larger quantities.  And with those bulk savings, they passed the savings on to their customers by lowering the prices of their multi-packs with a 17% price drop on their 3 pack, and a 23% price cut on a 12 pack of Three Jerks Jerky. 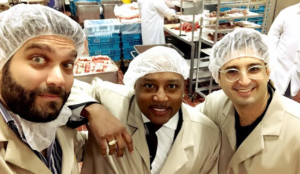 While buying and producing in bulk has saved the Jerks some cash, it also seems that none of their trade mark flavor was lost in the transition.  A fact that Food and Wine Magazine would agree with.  In the March 2016 addition of Food and Wine Magazine, the Editor conducted a massive staff taste test for the seven best healthy snacks worthy of being featured in their publication.  Three Jerks Jerky was seated prominently in second place for its delicious and premium flavor, as well as its simplified style.

That positive press, plus Daymond’s connections also got them a slot on the Home Shopping Network, a television station that’s broadcasted in over 96 million American homes.   The host of course loved the jerky, but the viewers were even more excited. With Daymond, Jordan, and Daniel all on set. They were able to sell out of all of the jerky they brought for the HSN audience in only 6 minutes!

Jordan and Daniel have been amazed at how many new customers Daymond has been able to corral for their business. They couldn’t be more grateful for the success Shark Tank has brought them and the amazing growth their deal has provided. With new and exciting opportunities still on the horizon, the beefy company is still hungry for more!