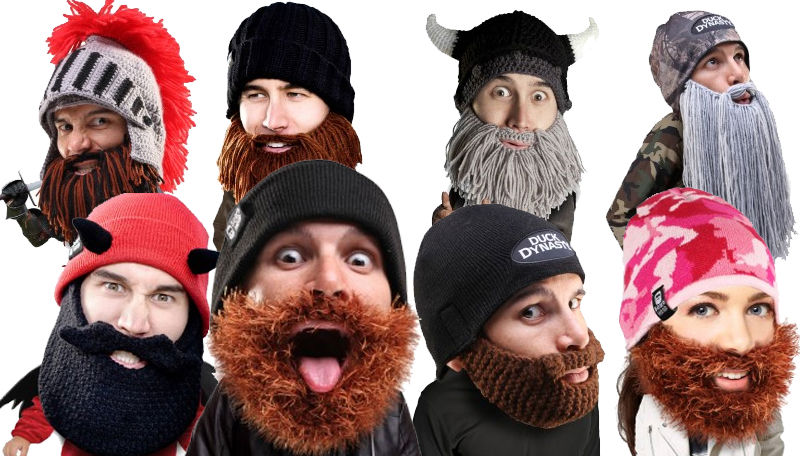 One day, Beard Head creator David Stankunas went snowboarding. The rest was history. He began the day by using an ineffective bandanna for shielding his face from the elements. He soon realized that he would need something better, as the bandanna refused to stay put, and prevented his breathing. David decided to make something that meets his needs. He listed his priorities and decided that being able to breathe was pretty high up there, followed closely by actually covering his face, and keeping it warm. He told his sister, and she helped develop and knit the first proto-Beard Head. Soon after, David taught himself how to knit and crochet. He invested $9,000 initially into producing a full line of Beard Heads. He saw another Beard related company on Shark Tank and thought it could be his big break. He put in his application. Let’s see how that went for him. Will David get a deal? 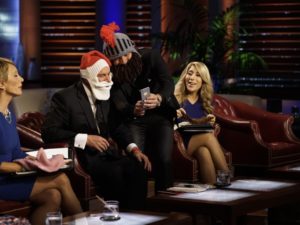 David walked out into the Shark Tank looking confident, but still slightly nervous. He introduced himself, and his company. He told the Sharks that he was looking for $250,000 in exchange for 25% equity. He went on to make the somewhat optimistic claim that Beard Head is set to become the next essential Winter accessory. He outlined a few of the uses for Beard Head, including skiing and hanging out at a tailgate party in the winter.

David then went on to ask the Sharks how they would keep their precious heads warm with so many cold weather events going on, such as the polar vortex. The answer was, of course, Beard Head. Lori and Robert looked amused. David went on to describe the benefits of his product, such as how warm and comfortable the detachable, beard shaped face mask was. David described his product line as having something for everyone, such as a Barbarian line, and one for sports fans. He had the Sharks laughing with his kid’s line. The poster featured a small child with a beard as big as his face. Adorable. David also featured Christmas themed Santa style Beard Heads. He asked the Sharks who would like to try one on, but not before making a truly terrible pun. “Now, I mustache you- which Shark would like to join me to take Beard Head to its perfect storm of success?” Before he was even finished, Robert had requested to try one on. Can he get one of the Sharks to bite?

David passed out samples to each of the Sharks. Kevin chose the Santa one, while Robert picked a knight’s Head. Lori, Barbara, and Mark Cuban declined to take one. Robert went straight to brass tacks. He said that he had seen this concept before, and asked David if he had any competitors. David confirmed that he did, but insisted that heirs company was the first. He said Beard Head came out in 2009, and he did not see competitors until more than a year later. Kevin asked if there was any way to protect it. David confirmed that he was unable to get a utility patent for his product.

Robert then asked about the all-important numbers. David told him that he had sold 250,000 Beard Heads or the equivalent of five million dollars in sales to date. Mark asked how much they typically sell for per piece. David told him that they range for $25 to $30. Mark was curious to see how much David had sold in the last year alone. David said he sold $960,000, which was a down year for Beard Head. David attributed the loss in sales to it being a rough year, but Kevin was concerned that it meant that business could be slowing. David explained that the year had been a rough one due to a costly legal battle.

The Sharks looked alarmed at this news. David said that their competitors said that they had a design patent on one of Beard Head’s designs. After $150,000 in legal fees, both parties walked away from the lawsuit. Barbara looked appalled. But the discussion carried on and went into safer waters. Robert asked how much a unit costs to make.  David explained that it largely depends on the design. Simple designs cost a little under $5, while the more complicated Knight Head costs $9.60 in production costs for each one. David said that he makes 20-25% profit for each piece, including after compensation for his employees. This puts him at an actual revenue of $250,000 a year.

Robert then asked what stores he was currently selling in. David did not name any names, but he said the product sells in 400-450 stores every seasonal. This piqued Kevin’s concern – as any longtime watcher of the show can tell you, Kevin is not a fan of seasonal products. He asked when the season ranges, and David told him that it mostly sells for the holidays. Robert said that he invested in a similar company a couple years ago, and even though he got licensing through colleges, the sales were always going down.

David stressed that other than the down year he had experienced, the business was making money and getting more profitable. He said that the company had been financed by profits since the beginning. He went through his growth process, from making the Beard Heads in his apartment, to an office, to a warehouse. He said that the company was now at a point where he can take it to the next level.

Barbara started off by complimenting David. She said that he was a smart guy for having good margins, making as much as he does, and by financing through profit. Then came the “but.” She said that in order to finance a product, she has to love it. She stated that she did not get the Beard Head. She was the first to go out. Mark was the next to go. He said that he was impressed with how the business was going, but he did not see a way to scale it up even more. He did not see it being a thirty million dollar business, or even a ten million dollar business. It was just stuck at the million dollar mark.

Lori was up next. She said that she saw the product as cute and popular, but she had seen the process before. After a huge rise for that kind of product, it comes to an apex and starts to slow down. It is more a novelty than a product with a long shelf life, and people would be looking for the next funny thing. David acknowledged that he had been around for awhile, so the people that are likely to visit the kinds of websites that they advertise on have probably seen them already. But he thinks he still has an advantage. David stated that 5% of his business comes from kids, and he has not spent as much time on that angle as on other ones. It could be something that he expands.

Kevin said that he heard David on the sports angle. He knew that it was a profitable business. But if Kevin was going to invest, he wanted to see a potential for more growth than David was capable of providing. He wanted the potential to reap 5 times whatever he invested. Kevin let David know that he would have to triple his business to provide that benefit. Kevin wanted to see seven million in sales, and he looked conflicted about telling David that he would not be able to achieve that. David said that he understood that it would be a tough road, but Kevin said that he was not excited enough about the business. He was the next to go out.

Robert said that he had invested in Ugly Elf Sweaters, which is a similar kind of novelty item. He said that he made a lot of money with them, and David looked pretty hopeful. But then Robert said that he thinks David’s revenue was being taken by competitors, that he was not running fast enough. David stated that that was why he was here. Robert said that he did not see David achieving the same success as Tipsy Elves. He was the last to go out.

Beard Head Now in 2018 – The After Shark Tank Update 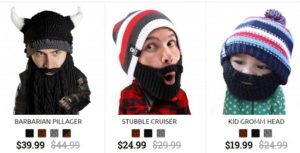 Even though the Sharks did not buy into Beard Head, David Stankunas still managed to make his Beard-shaped face mask into a company that earns about a million dollars a year. Their product line on their website continues to expand. One of their best sellers is their Barbarian line, probably due to the popularity of shows such as Game of Thrones and Vikings. They even make a line of Duck Dynasty Beard Heads that have the cast’s stamp of approval. Even better, they have a line of Beard Heads for children. Babies will not be left out of the beard fun. Beard Head was reviewed in popular media, such as Rolling Stone magazine, and the Today Show. Not everyone loves the Beard Head, however. They were sued in 2014 by one of their competitors for copyright infringement.