Beneath the Ink Update – What Happened After Shark Tank

Beneath the Ink Before Shark Tank

Before appearing on Shark Tank, Sherisse Hawkins was working for Time Warner Cable and Disney. Her Cofounder, Alex Milewski, was attending college at the University of Colorado. The pair started Beneath the Ink despite coming from vastly different backgrounds.  Before going on Shark Tank, they were about to raise $300,000 after participating in a University New Venture Challenge. They also received $250,000 from a state grant. Would the unlikely duo do as well in the Tank? Let’s take a look.

Beneath the Ink on Shark Tank 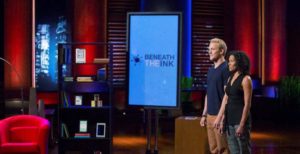 The pair behind Beneath the Ink walked into the Shark Tank and introduced themselves as Sherisse Hawkins and Alex Malesky. They told the Sharks that they were the co-creators of the Chicago-based business. Sherisse asked the Sharks for $350,000 in exchange for 10% equity. Alex said that Beneath the Ink is a digital text technology company that underplays the text of e-books with rich content. Sherisse aid that the content they provide can be used without the internet, and integrates seamlessly with what you are reading.

On the stage, there was a large sample e-reader with the text of a book already displayed on it. Alex manipulated the image as he spoke. He told the Sharks to image that they were reading a book, came across a character’s name, and wanted to know more about them. On the screen, the character’s name was highlighted. Alex said that you could simply touch the name to learn more about them. He called the additional material “BINKs” (short for Beneath the Ink link). He showed a couple more BINKs, including a map, a photo of a location, and a 3D photo of the Taj Mahal. Sherisse said that their goal was to make reading more immersive and exciting than other e-books. She asked the Sharks which of them wanted to join them on their journey Beneath the Ink.

Mark asked if you had to have a BINK enabled book to experience the content, and the two confirmed that you did. Mark elaborated his point, saying that the process to get the rights to each book and then map out the content has to be expensive and time-consuming. He asked them to explain the entire process of annotation from start to finish. Alex stated that what they are selling is an online portal where the author drags and drops the manuscript, and then adds the extras where they would like. Mark wanted to confirm that the author was the one to put the content in, and Alex agreed that that was what takes place.

Robert wanted to know what the process looked like to the actual consumer of the content. Alex explained that as an author, the portal offers options to publish to all the great e-book outlets. As a reader, you can use the extra content on any platform of your choice. Mark was all about the money – he wanted to know where they were getting paid. Sherisse told him that there are three different revenue streams. Beneath the Ink has a licensing model for universities or larger corporations that want to make several Beneath the Ink titles. There is a subscription model for smaller scale authors. That can be purchased for $12 a month. There’s also an export fee which is $99 per e-book channel.

Barbara wanted to know how much an author would pay to BINK their content. Alex told her it would be less than a thousand dollars. He elaborated that they would take a share of the royalties for each copy sold, which comes from the content owner. The content owner is either the publisher or the author. Kevin said that he was intrigued by the idea because he had three books out. He asked if his book that sold for $14.99 in e-book format would still cost the same amount with BINK content. Alex said no. He told the Sharks that they did a survey, and 98% of users wouldn’t mind paying extra for the additional content. They stated that they would pay 10 to 20 % extra, and Kevin clarified that to two dollars.

Kevin said that the only way the business model would be worth anything was if they were able to get great authors on board. Sherisse told him that she disagreed. There is a significant trend of small, self-published authors, in particular on the Kindle platform. Kevin asked them how many books went through the BINK process, and Sherisse told him there were only 8. Robert looked surprised, asking them if that was it. Sherisse said that she had chased particular niches, but Robert was having none of it. He stated that they need to start going after major authors and publishers. He told them if they got an enormous book, such as a Harry Potter in the BINK format, they are ready to go. The pair agreed. Robert asked them if they had approached any large publishers, and Sherisse said that they had. She told him that they were in communications with an author on the cusp of making it big.

Kevin asked what his sales would be to offset the cost of BINKing the publication. He wanted to know how much profit the author could expect to make by going the extra mile to BINK a book versus standard publishing. He said that he thought the model was unproven, and he wasn’t on board since they were at the very beginning stages of a “very rocky road.” He went out.

Sherisse told the Sharks that they took the risk out of the business. The Sharks laughed, and Robert told them in no uncertain terms that they had not. Mark had harsh words for the pair. He called them delusional. He told them that, yeah, they had raised $600,000, but that was not enough to drive demand. They would not be able to pay authors enough to keep them interested, especially not the big name ones. Sherisse asked if Mark had the technology to help them get there. Mark said no indignantly and stated that they were just trying to expand on technology that’s already there. He told the duo that they would need more cash than he would ever be willing to apply towards Beneath the Ink. He went out, stating that they had problems they were not even aware of yet.

Lori said that the final product sounded smart, and like a better reading experience. She was less confident in the ability of the product to reach authors, and to get to the market to be profitable. She stated that she would not be able to invest, and she went out. Sherisse attempted to tell the remaining Sharks that they wouldn’t find a more driven pair of entrepreneurs. Robert told them that it wasn’t enough. Barbara said to Sherisse and Alex that she had had a book out for many years. She could see many places in the book where it could benefit from BINKIng… But it would not help them, or Barbara make more money. Barbara said that she did not have faith in the business, and she was the next to go out. This left only Robert.

Robert told Alex that he thought it was a brilliant idea. He was concerned, however, because it seemed evident to him that BINKing a book needed to drive more book sales. Robert said that they didn’t appear to share that vision. Alex disagreed. He said that was what they were asking for the money for so that they can test the hypothesis. Robert stated that it was too early for him, and he was not able to get behind it at this time. He told them that it would take them millions of dollars to get where they needed to be, and they did not have a clear path to get them to success. He went out and wished them luck. In the exit interview, Alex said confidently that BINK was the way of the future.

Beneath the Ink Now in 2018 – The After Shark Tank Update 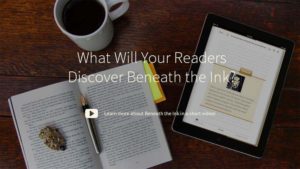 Following the Shark Tank Episode Barbara Cochran actually invested in the company via her private angel list fund. They BINKed a book for the lead singer of Blink 182, Tom DeLonge. They used their Shark Tank Fame well, even though they did not get a deal. The pair launched a new product called PageDip on the same day the episode was released, hoping to spur sales. You can view the PageDip site by clicking here. After making this shift and pivoting to enterprise software the company has reached profitability.