The concept behind Cougar Limited came to Ryan Custer a little while after he began dating older women. These older women are often labeled as “cougars”, hence the name of the product. While dating a woman 11 years old than him, he came to a realization. His girlfriend loved the fact that he could keep up with her kids, but why shouldn’t she be able to join in on the fun?

Ryan put more than 3 years of his time and money into Cougar Limited. He had to spend time researching an actual formula for the drink, then proceed to come up with a business plan. Cougar Limited is a very niche product, targeted at an audience of women 30-55 years of age. Those women make up a very small percentage of the overall market. It would appear to be almost not worth it, especially when Ryan already has so many competitors in the energy drink bracket. However, he is determined to make Cougar Limited a success. So much so that he actually still living with his parents while he tries to grind out his business.

After acquiring some sales and making a small standing for himself, Ryan finally auditioned his product to the Shark Tank. He hopes that at least one of the Sharks will see Cougar Limited’s potential because he could really use their financial aid and marketing expertise.

Custer enters the Shark Tank seeking an $150k investment in exchange for a 30% stake in Cougar Limited. Immediately after that, Custer dives into the explanation of what a “cougar” is. She is a mature, sexy, and older woman and the term cougar itself has become a “huge social movement”. He wanted to pounce on the opportunity to use the term and apply it to the massive energy drink market. Therein comes the Cougar Energy Drink, specifically designed for older women looking for an extra boost of energy.

The Cougar Energy Drink is the first gender specific energy drink on the market, which is the reason why Custer believes it will take off in the market. Inside this energy drink there are nutrients from 13 different super fruits that are supposed to improve women’s hair, skin, and nails. In addition to that, it is also supposed to provide a hormonal balance and ward off other signs of aging that women face.

Cougar Limited is about more than just an energy drink though. Custer wants to eventually expand the brand. He has coined the cougar term and wants to create a line of other age defying products. Women have begun to take on the “cougar” term with pride. What he to do wants is turn that into a business opportunity. By creating these products and potentially adding clothing to the line, he believes they could make a fortune.

Robert Herjavec turns his attention to Custer’s assistant. He asks the question everyone has been wondering “aren’t cougars typically older?”. It is revealed to the Sharks that she is 35, which surprises them, but 35 isn’t really all that old. Custer tells them that a cougar is defined as a middle aged woman. The Cougar Energy Drink is geared towards women between the ages of 30-55, the ages that remain in the cougar territory.

Moving on from the arbitrary definition of the word, Daymond John has some concerns. Custer didn’t make it clear whether or not the drink was on the market yet. He backtracks some to say that yes,  the drinks are currently being distributed in the Dallas area. However, over the course of 3 years they have only accumulated $60k in sales. This news completely turns John off from the product, making him the first to pull out of the tank.

Samples of the drink are then handed out for the Sharks to examine and taste. Custer tries to bring attention to the bottle itself. He claims that the hot pink color makes it stand out among the other energy drink bottles. This drink also has 0 calories, but Barbara Corcoran isn’t impressed. She says that it tastes like chalk, which is extremely unappealing. Custer says that this is the result of a detoxifying component in the drink. He had to sacrifice taste over effectiveness. This excuse does not convince her to make him an investment offer.

Mark Cuban takes his turn to ask where these bottles are currently being sold at. As of right now, it’s currently being supplied to a handful of 7-11 corner stores and was even picked up by a Curves location in Pennsylvania. Kevin O’Leary sees one huge issue with the brand though. He has cut his targeted market down by 75% because he is looking for not only women, but women who also fit the age bracket of a cougar. By doing this, he has really limited his business options and O’Leary can’t seem to grasp why this is a good thing. 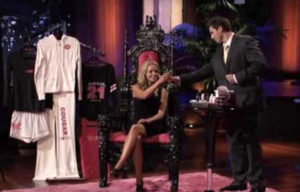 Custer argues that he is filling a gap in the market. There haven’t been any gender specific energy drinks being sold and the market for it is huge. O’Leary offers him some insight by telling Custer big beverage brands pay a lot of money to smaller energy drink brands to crush newbies. So he really does not see any hope for Cougar Limited at all. O’Leary can’t offer him any kind of help.

That leaves Herjavec and Cuban in the tank. Herjavec starts by asking a very sensible question. Would women really want to buy a cougar drink, or would they steer clear of it because it makes them feel old? Custer can only offer them a handful of statistics that maybe women are coming around to the term. Cougar Town has over 7 million viewers and celebrities have rallied behind the phrase. However, Cuban doesn’t believe that’s incentive enough to make a business based off a word. He isn’t going to invest into the brand and neither is Herjavec. neither of them are convinced that women are going to flock after this product and, at best, it’s just a gag gift.

Cougar Energy Now in 2018- The After Shark Tank Update

Despite having incredible enthusiasm towards his project, the Sharks just weren’t buying that women were going to love this product. It is age restricting and a questionable concept at best. Ryan just couldn’t walk away from the Cougar Limited business though. Especially not after having invested so much time into it already.

Ryan continued to update the brand’s social media pages, but eventually activity started to die down. The Cougar Limited official website is still up and running though (http://drinkcougar.com/). On the website, there are a variety of products available for purchase. In addition to the energy drinks, there are t-shirts and other clothing apparel. However, most women just clearly aren’t as interested in this type of branding as Ryan thought they would be. Looks like the Sharks were right on this one. Not all pop culture terms are meant to be turned into business endeavors.