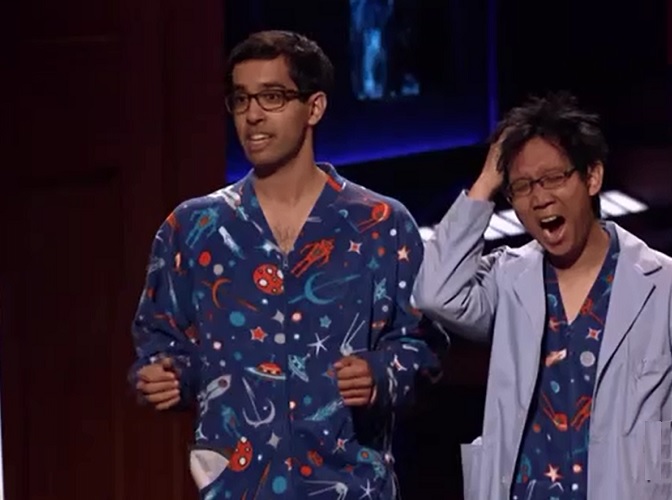 Neil Joglekar was an experienced entrepreneur with two successful start-ups behind him. The Stanford graduate had founded Cardinal Tutors, a successful Bay area tutoring service, and co-founded Reelsurfer, an online video-editing application. In 2013 he teamed up with former school friend Justin Lee, who had an impressive list of achievements of his own.

Justin had completed his undergraduate degree at MIT in Physics and Biology, and was a PHD candidate in a joint Harvard-MIT program in Health, Science and Technology. Justin had once been featured on CNN when he had launched a digital camera into space to take photographs of Earth. He had achieved the feat with a tiny budget of just $150.

The two friends teamed up in 2012 and put their combined knowledge of business, and technology, into producing a product that could help people lead more efficient and productive lives. They didn’t have a specific product in mind, instead they started with a problem, that of factors that reduce efficiency, and looked for a product that would help.

After researching the subject, they came to the conclusion that the biggest impediment to efficiency for most people was lack of sleep, and sudden waking. Sudden waking is known to commonly lead to sleep inertia, a groggy feeling caused by sleep patterns being interrupted. The entrepreneurs developed the concept of a sleeping mask, the Napwell, that would simulate a gradual sunrise for the user, and bring them gently out of sleep. They envisaged the Napwell being used for power napping by busy professionals, and turned to the crowd-funding site Kickstarter to help raise the initial set-up and production costs.

The Kickstarter campaign began in December 2013 with an initial goal of $30,000. When it ended 40 days later the Napwell business had raised in excess of $50,000 with the help of over 750 backers. The Kickstarter campaign soon produced another, unexpected result when it was noticed by Shark Tank producers, who contacted the duo and invited them to pitch their product to the sharks.

When Neil and Justin appeared on the show they were usually dressed. In fact the pair were in their pyjamas and dressing gowns. As the sharks looked on with amused smiles Neil explained that the pair were seeking a $100,000 investment, in exchange for 10% equity in the Napwell business.

Neil launched into the pitch, and even though he was clearly a top notch intellect, his business partner appeared to be struggling to stay awake, yawning, stretching and barely able to stand.

Neil explained that Justin was portraying a ‘Sleep Zombie’, and he told the sharks that 40% of people suffered from the same affliction. Justin acted out the part of a barely-conscious human very well, in fact the effect was so good, that Mark Cuban also started yawning, and the other sharks began to look a little sleepy too.

Justin came back to life to explain to the sharks about sleep stages and the problem of sleep inertia, caused by an interruption in sleep patterns. He revealed that the symptoms of sleep inertia could cause sluggishness and lethargy for the rest of the day, and that was where Napwell came in. The mask contained LED lights inside it that would gradually brighten to mimic a gentle sunrise, thereby bringing the sleeping user gently back to consciousness, from a relaxing and revitalizing rest. He urged the sharks to join their crusade to help the World nap more efficiently and help America ‘Naptimize’.

Neil handed out a couple of prototypes of the mask to the sharks as he explained an alarm could be set to the preferred waking time, and users of the mask could use it for a quick nap, or for the entire night.

Daymond John tried one of the prototypes on, Mark Cuban found the sight of his fellow shark wearing it highly amusing, and stifled a laugh. Lori Greiner asked for some more details about the alarm in the mask but was interrupted by Robert Herjavec. He was trying out the other prototype and asked Lori to be quiet, explaining ‘I’m trying to sleep’.

Mark Cuban couldn’t see the need for Napwell, ‘We’ve all taken power naps’ he said, gesturing to his fellow sharks, ‘But I’ve never had a bad one’ he continued. Fortunately for Neil and Justin, Lori Greiner came to their defense. She revealed that if she slept in the afternoon, she would always wake up feeling ‘Crabby’.

Justin told her that their mask would solve that problem for her, he began to run, once again, through sleep stages and the mechanism of the brain during sleep. Robert quickly interrupted him to assert that all the sharks knew about Sleep stages, he called it ‘basic science’ and asked Justin what his involvement in the Napwell business was.

Justin revealed his impressive educational achievements at MIT and Harvard, he explained about the PHD studies he was currently completing, and lastly he revealed that he had recently been involved in a project for the Gates Foundation that involved using drones to deliver vaccines.

The sharks were highly impressed at Justin’s academic accomplishments, but seemed a little confused why two such bright entrepreneurs would design something as trivial as a sleeping mask. Neil explained about his strategy of researching common problems, and producing a product that was needed, based on the results of that research. The pair had concluded that a sleeping mask would meet a huge unfulfilled demand, and Neil once again asserted that 2 out of every 5 people suffered from sleep inertia.

He told the sharks about the Kickstarter campaign that had launched Napwell, and explained that backers from the crowd-funding site had tested the mask, to iron out any minor manufacturing problems, before the final prototype had been produced. Daymond John inquired what price the mask retailed for, and Neil told him that it was currently $100, although the cost, and the retail price, could be lowered, if Napwell could gain investment from the sharks.

Mark Cuban was surprised that the Napwell pair were seeking funding from the sharks. He believed that such an impressive list of educational credentials would open the door for them to seek ‘easy’ funding from Silicon Valley and other technology-friendly investors. Justin attempted to answer that, but he didn’t do a good job of it. The brilliant young entrepreneur seemed to be portraying a sleep zombie once again as he explained, in a confused manner, that the idea hadn’t occurred to him, and that he ‘Wasn’t that familiar with start-ups’. The look that Mark Cuban gave him in silent reply was dripping with suspicion.

Neil attempted some damage control and explained that the pair had wanted to validate the product for themselves before seeking funding from technology start-up investors, but Mark Cuban was far from convinced. He told Justin and Neil that he ‘Wasn’t buying it’ and with little further pre-amble Mark was out.

Kevin O’Leary had many problems with Napwell, the main one being the complete lack of sales beyond the original crowd-funding campaign. It was an untested product in his eyes and he believed that most people would compare it to a standard sleeping mask, that would usually retail for a few dollars. The $100 price tag of the Napwell mask would put off many potential customers, and the company would need an enormous amount of marketing to raise the products profile. Kevin described the journey ahead for the Napwell business as a ‘Journey to Hell’, and because of that, he was dropping out of the negotiations.

Lori Greiner believed that although the Napwell mask did have some potential benefits, the vast majority of people suffering from sleep problems had a problem going to sleep. The mask offered no benefits to them and Lori believed that Napwell had produced a product that would never sell in particularly large quantities, and with that, she was out too.

Robert was philosophical, but ultimately unimpressed with the Napwell mask. He told Neil and Justin that the road to success was never a straight line, and expressed surprise that such highly qualified individuals had produced such an inconsequential product. Robert dropped out too, leaving Daymond John as the last hope for Neil and Justin in the tank.

Daymond wasn’t going to offer a last minute reprieve. He believed that the Napwell entrepreneurs had come into the tank too early, and still required a solid proof of concept before they could seek further investment. Daymond completed the round of rejections and the Napwell pair turned to leave the tank.

Lori offered one last morsel of comfort for the entrepreneurs as they left, ‘I love your onesies’ she called out, but they no longer seemed to care what any of the sharks thought.

Napwell Now in 2018 – The After Shark Tank Update

After the show Neil was disappointed that the sharks had not shared his vision for the business. He admitted that he and Justin might have been smoother in their efforts to convince the sharks that there was a huge potential market for Napwell, but he was confident that the business would succeed without their help. Unfortunately, in the 18 months since the Napwell segment first aired, the company has achieved very little.

There have been delays in providing Napwell masks to those customers who backed the original Kickstarter campaign. On may 30th 2016, the Napwell team were still promising those backers awaiting their masks, that the final run of 550 masks would be delivered sometime in July 2016.

There are more updates on the Kickstarter page relating to the final production run, but unusually for a Kickstarter campaign, they are only visible to previous backers of the project, so the exact nature of the production delays affecting Napwell remain a mystery for the moment.

It is possible to Pre-Order a Napwell mask from the company website, although potential buyers are warned that delivery may be delayed until September 2015, which combined with the updates on Kickstarter, indicates that there have been few, if any, Napwell masks pre-ordered from the website.

The whole Napwell business has the feeling of one that is being allowed to stagnate and die. There is no indication that the highly-educated duo of Neil and Justin have promoted the Napwell mask at all since their segment aired, and it appears likely that once they have completed their obligations to the Kickstarter crowd that helped them launch the business in the first place, they will move on to other, more profitable, projects.

That suspicion becomes even stronger when viewing Neil Joglekar’s Twitter account. He tweets to his 9,000 followers regularly on a variety of subjects, and promotes a number of businesses, but Napwell doesn’t get a single mention. Perhaps Neil can see that Napwell has no real future and has decided to shelve the project when the final batch of ordered masks are delivered.

Neil posted a tweet in April 2016 that read ‘Pain is inevitable, suffering is optional.’, and it may well be that after the pain of being unanimously rejected by the sharks, he and Justin have decided to end their efforts to bring quality sleep time to the masses, and instead to let the Napwell business gently drift off to sleep, and avoid the suffering of a long drawn-out death.