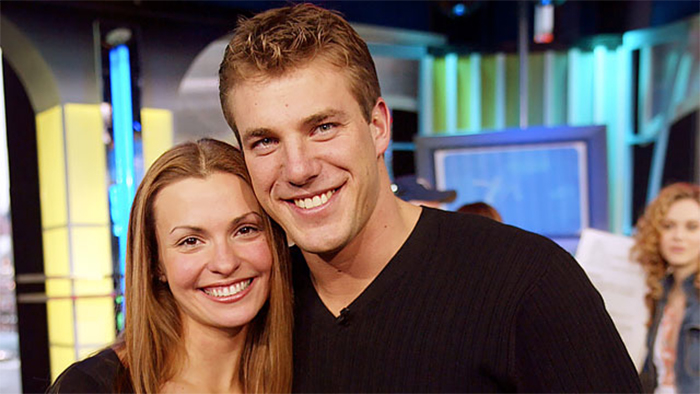 Aaron Buerge is a television personality best known for having appeared in the second season of the reality dating series, The Bachelor. As its name implies, the show revolves around a single manーa bachelor, who is surrounded by a number of possible romantic interests from which he is eventually expected to choose a wife from. Throughout the season, the bachelor eliminates a candidate every week until a final candidate is left, with whom him he will ultimately propose to. As the vice president for a number of family owned banks, Buerge appeared on the show’s second season in 2002; he ultimately selected Helene Eksterowicz, a school psychologist, as his winner in November of that year, with Brooke Smith as the runner up.

However despite the rosy relationship which developed between the two and their eventual proposal, the pair was confirmed to have later called off on their engagement; in a later interview, Buerge cited that “[they] had a difficult time seeing eye to eye on some issues” and that it was ultimately the reason behind their separation. Some others have speculated that Buerge and Eksterowicz’s long distance relation did not help eitherーas the former bachelor had been focusing a lot of time on his banking company and a new restaurant which he was opening at the time. The two have since married different people; Buerge proposed and married Angye McIntosh in 2009 while Eksterowicz married a senior consultant at a technology company named Andrew Goodman in 2013.

Besides being known to many as a television personality, Buerge was also a businessman who had owned a restaurant named “Trolley’s Downtown Bar & Grille” in his native city of Springfield, Missouri. However despite the generally positive reviews it received from diners since its opening in 2003, the bar eventually permanently closed down after years of business in 2014. 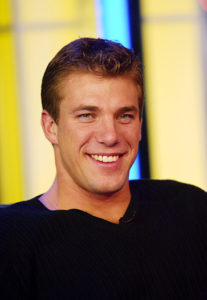 Born on April 22, 1974 in Butler, Missouri, Aaron Grant Buerge is the son of Alden and Kathy Buerge. He is the oldest out of three children and has two younger brothers named Brandon and Justin. Growing up as a teen, Buerge was highly involved in sports and had played for the school’s soccer and track and field team during his time at Joplin High School as a student; at the time, he was also considered by many to be an All American Swimmer.

After graduating from high school, Buerge went to the University of Missouri-Rolla to study mechanical engineering; he later graduated with a Bachelor of Science degree in 1997. Shortly afterwards, he enrolled at the Clensom University in South Carolina; after having studied for a few years at the institution’s campus in Italy, he later earned an MBA in International Finance. At the age of 24, Buerge was employed at the Missouri Southern State University to teach various senior level International Business classes at the college.

Aaron Buerge in the Reality Series, The Bachelor 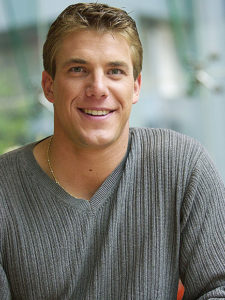 In the spring of 2001, Buerge auditioned for the reality series after having been nominated by his fellow bank employees on the ABC website (which was broadcasted at the end of every episode). Despite the fact that he himself had never watched The Bachelor before (according to him he doesn’t watch much reality TV), he later sent an auditioning video to the shows producers in Los Angeles as his own “personal ad”, after having received encouragement from his employees and friends.

Created by Mike Fleiss, The Bachelor is an ABC dating reality series in which a single manーthe bachelor, is presented with a pool of women as possible relationship interests from which he is later expected to select and propose to a winner; each episode, the bachelor eliminated a candidate from the group by presenting a rose to the ones he wanted to remain on the series, and the opposite for those whom he felt did not share a chemistry with. The beginning of the show typically takes place in a large mansion known as the “Villa De La Vina”ーa six bedroom, nine bathroom home in Agoura Hills, California. As the show progresses, the bachelor and contestants travel to other places around the world and often engage in activities such as group dates or one-on-one dates.

After a successful audition, Buerge eventually appeared on the second season on the show in 2002, as the bachelor of the series. The season premiered on ABC in September 2002 and eventually ended in November that same year. As the show progressed, the bachelor seemingly appeared to have developed a rosy relationship with school psychologist, Helene Eksterowicz. At the end of the season, Buerge ultimately proposed to Eksterowicz in front of millions of TV viewersーin fact, Eksterowicz was the first contestant to have accepted a proposal on The Bachelor at the time!

However having said that, things weren’t all fun and games for Buerge following the proposal. Since the actual happenings on the show occurred prior to the series’ airing in television, the bachelor had to make an effort in order to keep things secret, before they were broadcast to viewers. For instance, Buerge had to pretend he was still single for many weeks, prior to the air of the show’s finale in order to keep the audience in suspense. He also had to watch the series every week to know exactly where he was in his “life” so that he wouldn’t spoil anything in his ongoing interviews. In order to prevent slip-ups, producers of The Bachelor even went as far as forbidding Buerge from seeing or contacting his girlfriend, although to be fair, they did set up and organize and special phone-line which allowed the two to talk to each other; they also offered them the opportunity to go on out of country, weekend trip.

Besides the things put in place to prevent spoiling of the show, Buerge was also not allowed to wear clothes from his own wardrobe while on The Bachelor and even in public appearances; the producers of the series had signed away his dressing rights to Alfaniーthe clothing brand of Federated Department Store Inc. Because of this, Buerge was often seen spotting the company’s signature cashmere sweaters and dark leather jackets on the show and in events; in reality, the former bachelor had said that he usually prefers wearing normal jeans and sandals.

Despite these less known facts, The Bachelor was a huge hit amongst viewers since its premier in March 2002 and have since spawned a number of spin-offs including Bachelor Pad (2010), Bachelor in Paradise (2014) and The Bachelorette (2003). The twentieth season of the series recently finished this March; so far, the show has spanned a total of 20 seasons, through a stunning 205 episodes. 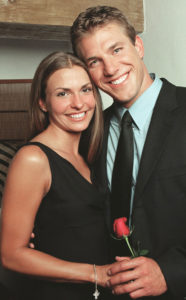 Despite Buerge and Eksterowicz’s successful proposal following the reality series, the two later called off the engagement after five weeks of being togetherーsending shockwaves across the world. Although the former bachelor was initially reluctant to go public regarding their separation, he eventually agreed to open up about the relationship to media sources under the request of Eksterowicz, who had begun to feel “hounded” by the situation. Not wanting there to be weird rumours surfacing about the two, Beurge then participated in an interview, in which he shared with viewers the reason behind the breakup; the two ultimately decided to call off their relationship after having experienced difficulty in being able to see eye to eye on certain issues; many have also speculated that the pair’s long distance dating may have played a role in it as well. At the time, Buerge was heavily invested in his family’s banking company and had also been busy with the opening of a new restaurantーit’s no doubt that that can put a slash through wanted dating time between a couple.

Since the separation, the two have gone their separate ways; it was later revealed that Buerge did not ask for the engagement ring back, which he had given to Eksterowicz during the proposal. According to him, the ring was “an unconditional gift” that it would be “[hers] for the rest of [her] life.” The former bride-to-be has since announced that she will be keeping the 2 carat diamond ring safe, in a safety deposit box. The school psychologist later married a senior technology consultant in 2013, named Andrew Goodman after having been together for over a year.

Nearly seven years after his time on the show, Buerge tied the knot with Angyne McIntosh, a commercial insurance agent whom he had been introduced to by a former girlfriend during a group outing. The pair married beneath a beautiful spread of flower drapes in the two’s hometown city of Springfield, Missouri on August 8, 2009. The ceremony took place in front of 75 guests, at the Grande Ballroom of the Historic Vandivort Centre. According to a guest present at the wedding, the two walked in forwards to the altar, where they later briefly exchanged their marriage vows and soon “buzzed” out of the halls to greet their guests afterwards. The couple welcomed their first child, a daughter named Aven on October 5, 2009, a few months after the wedding.

Since starting his own family with Agyne McIntosh, Buerge has pretty been out of the lime lightsーit’s no doubt that he’s been busy both as a father and as the vice president of a chain of bank companies.

In 2011ーclose to ten years after the second season of The Bachlor, Buerge made the news when he unexpectedly announced his bankruptcy. According to Buerge himself, he was forced to declare personal bankruptcy after a bank, from which he had taken out a loan for his bar, collapsed in 2008; the new note holder had wanted the restaurant owner to pay back the amount, more quickly than he would have hoped. However despite the declared bankruptcy, Buerge later reconfirmed the fact that he was in fact, not in “financial distress” and that he was “not broke”. After the bank failure, his two restaurants, namedー”Trolley’s Bar & Grille” was sold to a group of investors; they later permanently closed down in 2014.

Despite the unfortunate circumstances, Buerge has been enjoying life as a father to a seven year old girl named Aven while continuing to work at his family’s chain of bank companies. As a sports lover, he also occasionally goes boating and water skiing in his free time.